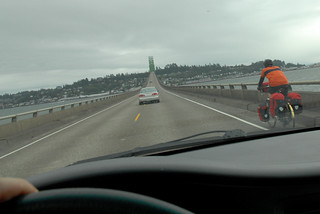 This week’s Monday Roundup is brought to you Mountain Shop (NE 37th and Sandy), where you can learn about, buy, and rent excellent gear for your next bike adventure.

Housing shortage: “None of us, not a single damn one of us, is entitled to live where we want to live for as long as we want to live at a price we can easily afford,” writes Tyler Hurst in Willamette Week. “It’s not fair at all. Nor is it fair to love a city and not want to share it.”

Self-healing metal: The bike frames of the future may mend themselves.

Rolling joints: Customs officials in Arizona arrested a 17-year-old boy who stuffed his bike tires with three pounds of marijuana.

Transit subsidies: Portland’s TriMet does fairly well on both ridership and efficiency in this national comparison.

Recruitment problem: “I don’t think we’re as far along as running is in making events that appeal to everyone,” says Fred Clements, executive director of the National Bicycle Dealers Association. Running is up 20 percent in the last five years, while the number of people biking hasn’t grown. (Portland-based “enthusiast of three-speed bicycles” Shawn Granton is among the experts quoted.)

Seattle bike share: The city is applying for a $10 million federal TIGER grant that would quintuple its bike share system and add e-bikes.

Healthy biking: A new multinational study concluded that walking and biking investments return an average $13 worth of better community health outcomes for each $1 invested.

Beaverton downtown: It’s finally moving closer to getting one.

Solar bike path: The Amsterdam-area test installation is just as inefficient as engineers predicted it would be.

Bike theft: It’s a proven deterrant to bike use, which makes it “much more than petty larceny.” But police treat it about the same as a stolen TV.

Bike Realtors: They can now be found from coast to coast.

Dublin’s shift: Long richer in biking than in bike infrastructure, Ireland’s capital is preparing major limits on driving through its central city.

20% by 2020: That’s where Fort Collins (currently at 7 percent bike mode share) claims to be heading.

In the way of modern headlines, this one tells the story of your video of the week well: “These DIY Bike Signals Are Easy to Make and Last For Ages on One Battery.”