Long-term plans are falling into place for a federally-subsidized biking and walking upgrade to one of Southwest Portland’s most important main streets.

And oh, it might come with a rapid bus or rail system, too.

Staff at the regional agency Metro announced last week that they weren’t going to recommend a $900 million light-rail tunnel beneath OHSU, instead sending the proposed Southwest Corridor high-capacity transit line on the surface of SW Naito and Barbur as it passes through Southwest Portland toward Tualatin and Tigard.

The decision means the possibility we wrote about during our Southwest Portland Week last winter — federal matching funds for major sidewalk upgrades and protected bike lanes through the Barbur commercial district and key feeders like Capitol Highway — is likelier than it was. However, it comes at the cost of direct transit access to Oregon Health and Science University, the city’s largest employer, and to the Hillsdale neighborhood.

In any case, none of the work is likely to happen for years. Metro’s schedule for the project anticipates completion between 2025 and 2035.

A Metro map of options for future high-capacity transit routes through Southwest Portland.

In short, planners say, the ends don’t justify the means – or the money – for either a deep-bored light rail tunnel to serve Marquam Hill and Hillsdale, or a shallower tunnel that would just serve Hillsdale town center.

“The vibration impacts to OHSU facilities, the physical damage to Duniway Park for the north portal construction site and the constant truck traffic over multiple years in Lair Hill and Hillsdale are major community costs,” Ford said, “with only moderate gains in riders.”

Ford said the large price tag of a Marquam Hill light rail tunnel – as much as $900 million in latest estimates – was also a concern. It could cost 35 to 46 percent more than a surface route with only an eight percent bump in total transit ridership, according to the report.

In their recommendation, planners acknowledge that they heard a lot of public support for directly serving Marquam Hill with light rail. But they maintain that light rail or bus rapid transit on SW Barbur Blvd. or Naito Parkway, with elevators or escalators connecting to OHSU, would provide improved service to Marquam Hill with fewer neighborhood impacts and at a lower cost.

A surface route, Ford said, would also improve transportation safety in South Portland and along Barbur, including adding new bike and pedestrian infrastructure at two notorious bridges along a wooded stretch of the road. Such a route would be within walking distance of high-density South Waterfront, where OHSU is building new facilities.

OHSU officials have said they don’t want to be bypassed by high capacity transit, but have declined to say whether they’d insist on a tunnel. “As we grow, it’s essential that we continue to have excellent [transit] service,” OHSU associate vice president Brian Newman said in April. “That doesn’t necessarily mean a tunnel, but it does mean that the project needs to serve Marquam Hill and South Waterfront.”

A tunnel to serve Hillsdale alone would be shorter and shallower, and could work with either light rail or bus rapid transit.

But that tunnel option would actually result in fewer new transit riders and a longer trip from Portland to Tualatin, according to planners’ analysis, at a significantly higher price. Additionally, its prospect had raised significant community concerns about multiyear construction impacts in the Hillsdale business district, which would have to be torn up temporarily for the tunnel to be built.

Planners also note that Hillsdale is already well-served by frequent local buses, and TriMet is planning improvements as part of its Southwest Service Enhancement Plan.

All that means a direct transit tunnel might not be worth the added cost of $230 million for light rail or $140 million for bus rapid transit. Planners suggest exploring whether local buses might be able to use any dedicated transitway that’s built on Barbur or Naito from Hillsdale to downtown Portland. 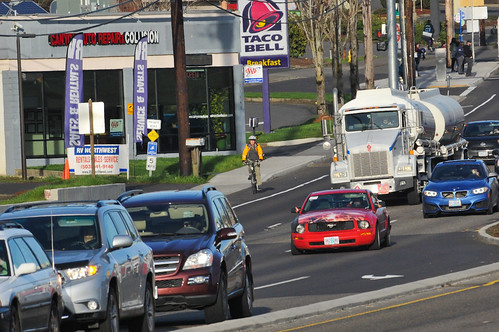 SW Barbur might be the route through Tigard, but a transit line could veer onto I-5 or elsewhere instead.
(Photo © J. Maus/BikePortland)

Beebe goes on to explore the still-open question of a tunnel that could directly serve Portland Community College’s huge Sylvania campus, which is likely to be a major driver of transit in the area.

Of course, it’s also totally plausible that none of this project will move forward. Tigard and Tualatin voters have approved ballot initiatives giving themselves veto power over major transit projects, and if a new bus or rail line can’t serve those cities, the ridership math falls apart. But as the planning process continues, last week’s staff recommendation (which hasn’t yet been approved by Metro committees or council) could gradually evolve into big news for biking on SW Barbur.

Got questions or opinions on the decision? You can learn more and share your thoughts online right now or at an open house tomorrow at Metro headquarters.