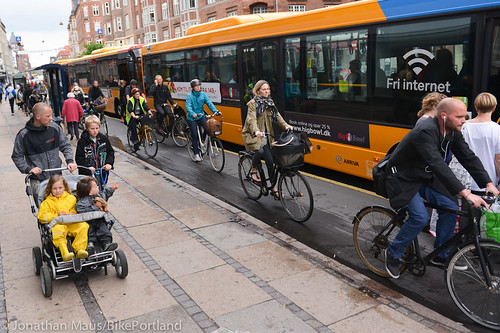 See it in CPH, then do it in PDX — at least that’s the idea.
(Photos © J. Maus/BikePortland)

Top staff from the Bureau of Transportation and some of Portland’s most powerful leaders from the downtown business community will get a first-person view of one of the world’s most bike-friendly cities next week.

“I think it’s worth making the trip to fully understand what we might be able to aspire towards.”
— Art Pearce, PBOT Group Manager of Policy, Planning and Projects

PBOT Director Leah Treat and Art Pearce, the agency’s manager of policy, planning and projects, will join an assemblage of downtown business leaders, city hall staffers and other policymakers for a study tour in Copenhagen, Denmark. The trip is organized by the national non-profit People for Bikes and takes place under the umbrella of their Green Lane Project which aims to get more protected bike lanes built in the United States. In addition to spending five days in Copenhagen, several members of the group will leave early and make a side trip to Malmö, Sweden.

Treat and Pearce will be joined by a mix of city hall staffers and reps from public agencies and private companies. Here are the eight other people who will join them:

According to Pearce, who shared news of the trip with us in a phone call yesterday, the impetus for the trip is to get powerful political players and business interests focused and enlightened about PBOT’s upcoming Central City Multimodal Safety project — also known as the project that aims to create a network of protected bike lanes downtown. PBOT secured $6 million in federal funding for this project two years ago but is just starting to get serious about starting it. The city hired a project manager back in May and hopes to officially kick off the project in fall and begin the public process by this winter. 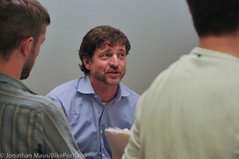 By sharing the world-class cycling infrastructure that adorns Copenhagen, Pearce hopes “key constituents involved with the Central City project” will gain a better understanding of “global best practices that will prepare us for making the smartest decisions possible with that six million dollars.”

None of the trip participants are officially involved in planning the upcoming project but Pearce said they are, in his mind, “potential future stakeholders for the project.” “It seemed like it would be great for them to get this exposure prior to a more official conversation.”

PBOT spokesman Dylan Rivera said the trip shows that while Portland is, “humble enough to know we still have a lot to learn when it comes to biking and walking infrastructure.” And with no adequate models in North America, Rivera says it’s necessary to go to Europe to “understand how we can improve.”

“This is about making good decisions for the future of downtown Portland. This grant is a huge opportunity, maybe once-in-a-lifetime, so it’s worth investing time and resources to make sure we’re making good decisions and being collaborative in learning together with the business community and other downtown stakeholders… We need to study up and make sure we’re going into it [the project] looking into global best practices… We want to see how we can make the best and safest facilities possible.”

This will be Pearce and Treat’s first time in Copenhagen, but the idea of sending city staff, community leaders and policymakers to Europe on study tours is nothing new to the City of Portland.

In 2005, then City Commissioner (and former mayor) Sam Adams led a trip to Amsterdam with his Chief of Staff Tom Miller (who preceded Treat as director of PBOT). Also on that trip was PBOT Bicycle Coordinator Roger Geller.

In 2008, Metro sent several local leaders on a trip to Amsterdam and Copenhagen. And just two years ago, I joined a Portland delegation and leaders from other U.S. cities on a trip hosted by the Green Lane Project.

“Seeing is believing,” he continued, “It takes the first-hand knowledge of city staff and key constituents to understand what the world of the possible is for Portland’s central city and I think it’s worth making the trip to fully understand what we might be able to aspire towards.”