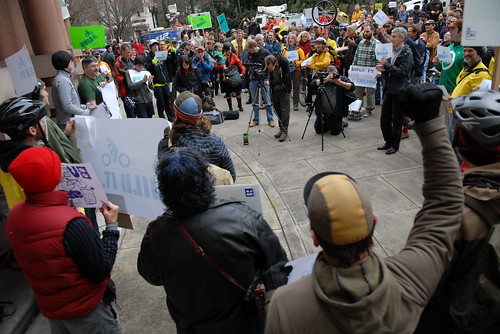 A scene from the “Build It” rally at City Hall back in February 2010.
(Photo © J. Maus/BikePortland)

Saying Portland already knows how to increase safety on its streets and can get to work immediately without further study, the advocacy group BikeLoudPDX is organizing what looks like Portland City Hall’s first rally in five years on behalf of bicycling improvements.

“It doesn’t take money, it just takes political will. And the rally is to give them the political will to do it now.”
— Ted Buehler, BikeLoudPDX

“There’s a real danger that Vision Zero can just be prolonged indefinitely if they keep on studying it,” BikeLoud organizer Ted Buehler said Friday. “But really, they have the tools in their toolbox to do it now. And it doesn’t take money, it just takes political will. And the rally is to give them the political will to do it now.”

Buehler said he thinks the city supports safer streets and other transportation improvements, but isn’t aware of how many Portlanders share those goals.

“There is a constituency out there that is supporting them in taking more substantive measures to improve safety,” Buehler said. “We are inviting the constituency and anybody that supports the cause to come between 8 a.m. and 10 a.m. and show your support.”

“We want to make sure the rally is open to people who are on bicycles and people who are not on bicycles,” said Jessica Engelman, a rally organizer with BikeLoud. “It’s Pedalpalooza; we’re trying to make it a little more fun, so people can bring their kids, maybe bring costumes.”

“They know they need to push City Hall, and they’re being heard at City Hall.”
— PBOT Manager Art Pearce in the Portland Tribune

“Whenever a constituency goes out and shows support for their cause, it’s always easier to get resources directed toward the cause,” he said. “Whenever people in Ladd’s Addition complain about stop-sign running at Ladd’s Circle, the police go out and do a sting. We want to show that there are other people in town that care about safety elsewhere, and we want better enforcement of those traffic safety codes as well.”

Buehler said BikeLoud is preparing a list of specific actions that the city could immediately pursue, such as installing interim traffic diverters on several neighborhood greenways and maintaining a plan to spend 52 percent of new revenue on safety-related measures.

“We’ve sent 400 postcards in from caring constituents asking for diverters on Clinton, and we’ve had the Buckman neighborhood association ask for a diverter on Ankeny, and the city is still not delivering on those,” Buehler said. “And in the meantime, they are taking away a diverter on Rodney. That’s fine if they want to spend money on studying things, but they already have the Portland Bicycle Master Plan on the books. And we’re asking them to implement these things much more aggressively. And that will support the cause of Vision Zero.”

Will Vanlue, a Portland resident who started a petition to downgrade Portland’s status as a Platinum Bicycle Friendly city said safety projects need to be a higher priority among city leaders.

“I don’t know why they’re talking a big game about Vision Zero and then repaving these unsafe streets without talking about changes,” he said. “We’re just restriping unsafe designs when we could be changing the street probably for low or no cost.” Activism from BikeLoudPDX and others has been on a roll in Portland of late. For an article published today in the Portland Tribune, city transportation planning manager Art Pearce said “The advocacy we’re hearing from BikePortland, BikeLoudPDX and the BTA is very helpful to remind us we have to keep reaching to succeed. They know they need to push City Hall, and they’re being heard at City Hall.”

The rally is planned for 8 a.m. to 9:15 a.m. Wednesday, at which point participants will head into City Hall in support of testimony from four BikeLoudPDX and Bike PSU biking advocates for rapid safety improvements in Portland.

The council’s discussion of bike-related issues is expected to wrap up by 10 a.m., at which point some rally participants are planning to join a day of further events to promote other city plans that have yet to be executed. Then at 4:30 p.m., there’s a Downgrade Portland ride linked to the morning rally.