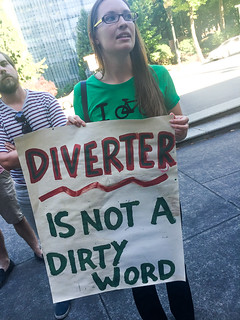 An unprecedented day of protests yesterday have yielded their first results.

BikeLoudPDX, Portland’s upstart bike advocacy group that has made lots of headlines in the past few months, started the day with a big rally in front of City Hall followed by several of the group’s leaders giving impassioned testimony in front of City Council. After that, they helped organize several rides and then held another rally on City Hall’s steps last night.

BikeLoud leaders and the people they have inspired to show up to these events share a similar feeling: frustration and anger that city leaders sit idly by while Portlanders risk their lives on unsafe streets. “It’s bullshit!” and “It’s unacceptable!” were just two of the phrases chanted at last night’s rally.

And now it appears those voices are having an impact on City Hall.

Last night City Commissioner Steve Novick, the man in charge of the Bureau of Transportation, penned a lengthy blog post in direct response to the protests. He titled it, “Working together to build safer streets.” (He also shared thoughts about biking and the Climate Action Plan in a separate post.) 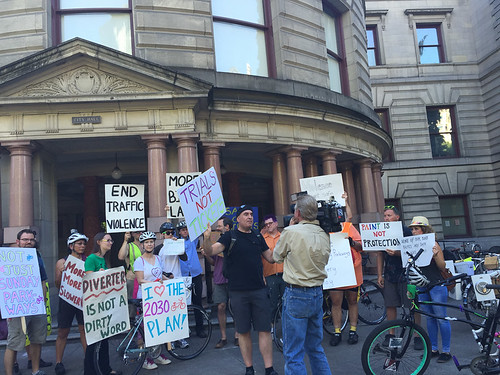 Soren Impey with BikeLoudPDX being interviewed by KGW-TV.
– Advertisement –

After sharing that recent tragedies weigh heavily on him personally and create an “emotional burden” on the entire city, Novick reviewed the city’s current work on speed limits and legislative efforts in Salem.

And then, the most important sentence in the entire statement:

In reference to Neighborhood Greenways, I hear you.

“I have asked PBOT work with the community and neighborhood businesses to test temporary diversions around Neighborhood Greenways this summer.”
— Commissioner Novick

This has to feel good for activists that have spent months riding and rallying to draw attention to the uncomfortable and dangerous conditions on many of Portland’s “bicycle boulevards” that have become cut-throughs for people seeking a faster way through neighborhoods.

Then Novick shared a specific action he will take to address the problem. “I have asked PBOT work with the community and neighborhood businesses to test temporary diversions around Neighborhood Greenways this summer.” This statement makes good on a promise Mayor Charlie Hales made following a meeting on street safety earlier this month.

Novick’s statement comes just a week after a senior PBOT planner told the Portland Tribune that “the advocacy we’re hearing… is very helpful” and that it’s “being heard at City Hall.”

And yesterday morning as he walked into his office, Mayor Charlie Hales grabbed the mic and addressed the rallying crowd: “We have the bike system we have because of activism out of the community,” he said, “Now we need more of that… So keep it up… When we feel the heat we see the light.”

Now that the lights are on and City Hall sees the problem, let’s hope there’s more concrete action to report soon.

The post Commissioner Novick responds to ‘Day of Protests’ with diverter promise appeared first on BikePortland.org.