I have some bad news, some good news, and some very good news.

As of today (July 1st), timber company Weyerhaeuser Columbia Timberlands has started a new program that requires all users of their tree farms and other land in Columbia and Washington counties to have an official permit. This new “recreational access program” is something Weyerhauser has done on their land in other parts of the United States but it’s a first here in our region. The company owns about 126,000 acres in dozens of parcels between Portland, Longview and the Oregon Coast.

As you can from the lead photo, new signs have already been posted.

This is a big deal because many of these roads have become popular routes in recent years as gravel riding has taken off. Making matters worse is that Weyerhaeuser only issued 100 non-motorized use permits (and that was only after they were urged by bicycling advocates to sell more) and the $50 permits are already sold out.

This means some of our favorite routes, like the Bacona-Pisgah road between Scappoose and the Banks-Vernonia Trail are now off-limits unless more permits are made available (or a friend will let you borrow theirs).

In Weyerhaeuser’s map image below, the purple parcels now require a permit: In an email about the new program, a Weyerhaeuser rep shared with us that, “This recreational access program allows us to have more control over who is on our land.” So far there’s no indication that the new program was put into place in response to an increase in use by bicycle users. Sources tell us the main use-management issue Weyerhaeuser faces on these lands is hunters and motorized vehicle users.

And now the good news:

This new permit program is only in effect through December 31st of this year. Hopefully at that time Weyerhaeuser with either release more non-motorized permits, or simply revert back to how things were before. The company says it’s likely the permits are here to stay and will transition into a year-round program. Here’s how the Weyerhaeuser rep put it in a recent email:

“Since the program is new we are taking it slow and allowing ourselves time to make improvements in our program prior to the next implementation season.”

And now the very good news:

For years, people have enjoyed riding the mountain bike trails south of Scappoose. They’ve long been owned by timber companies that have allowed bicycling as long as the rules were followed. However, with the adoption of this new program, Weyerhauser put a popular 190-acre parcel up for grabs to the highest bidder. When word spread of this last week there was panic in biking circles because whoever won would own an exclusive recreational lease on the property. 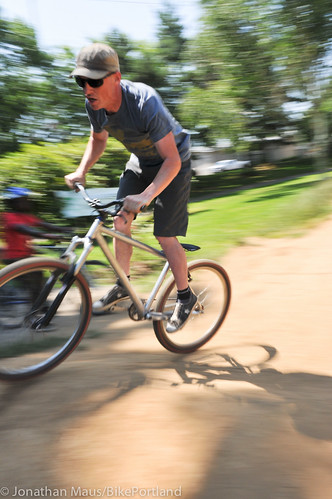 The Northwest Trail Alliance was offered a one-year lease, but due to liability insurance issues they were unable to secure it.

Today we confirmed the good news that a local bike advocate and experienced trail builder won the lease. His name is John “Dabby” Campbell and he is already putting together a new advocacy group — “Friends of Scappoose” — to help him manage the parcel in a responsible way.

Campbell is a former Portland bike messenger who now works as a custom trail builder. He’s a dedicated volunteer with the NW Trail Alliance and has worked with parks agencies around the region to develop and maintain pump-tracks, a service he also provides for private clients. (Want fun bike trails in your backyard? Dabby is the man to call.)

Reached today for comment, Campbell said he’ll work with members of existing local clubs and advocacy organizations to decide who can use the property. “This allows to offer it to as many users as possible, while still staying within the confines of the lease.” Campbell added that he has already been in contact with Weyerhaeuser and people who live adjacent to the property and will develop a simple management plan that, “reflects directly upon the many years of already amazing stewardship shown by various user groups.”

As for how much he paid for the lease, Campbell didn’t say exactly. “I will just say, that for less than the price of a daily 12 oz Latte, I have secured for 1 year the the Northside Scapoose Trails for qualified responsible users.”

To help offset costs, Campbell has launched a crowdfunding effort at GoFundMe.com. He hopes to raise $3,000 to offset the cost of the lease, insurance, legal fees, and maintenance.