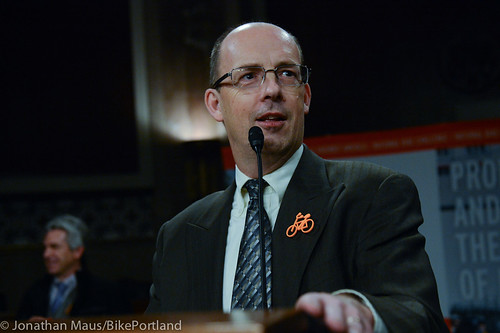 If Andy Clarke has had a single mission in more than a decade at the League of American Bicyclists, it’s this: turning the U.S. bicycling movement from what he calls “a narrow special-interest group that by and large people don’t like” into “a public-interest group.”

“We’ve made such huge strides on the busy streets in cities. But the suburbs are the next great big frontier.”

In a telephone interview the day after announcing his resignation, Clarke said he thinks this is happening — but that even as it gets its ship in order, the movement is facing down a tidal wave.

On Wednesday we spoke with Clarke, 53, about the changes he’s seen during his 11 years at the helm of the national bike advocacy group; about the biggest threat facing the bike movement; and about the unique challenge of further improving biking in Portland. 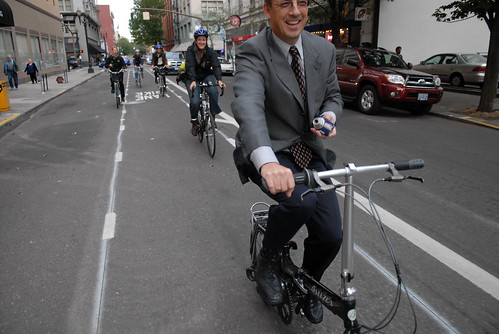 Clarke seemed to approve of this buffered bike lane in downtown Portland.

How has the League itself changed while you’ve been there?

I moved here to work for the League when it was the League of American Wheelmen in 1988. I’d been working in the same kind of work for an environmental group in England for three or four years out of college. It was 1988 to 1990. Then I left and for about 10 or 12 years, I’d been hearing from other people that I didn’t really feel that the League was playing its role, supporting state and local advocacy. During the 90s you saw the Alliance for Biking and Walking start, the Rails and Trails Conservancy. When I got back, that was changing; the League was kind of getting its act together again and starting to play that national role, first with the National Bike Summit and then with the Bike-Friendly Communities program.

One of the things that makes me happiest about the BFC program was that we looked at more than 800 applications, and in all but a handful of instances, people want to know what the feedback is and they want to get to the next level. They just want to know what to do next, how they can do better and what we think they should do. And then they just go out and do it.

At the federal level and the congressional level, certainly we’ve had our ups and downs. I feel like we’re providing that voice for cyclists and are a good representative for the cause in Congress. It’s a big world out there and the League is a small part of all the activity, but I’d like to think that we’re a part of all that momentum that everyone sees at the state and local level. 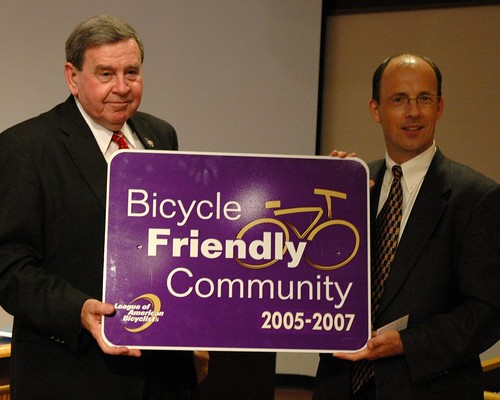 But overall, the total number of people bicycling at least a few times a year isn’t growing (according to latest study by the National Bicycle Dealers Association) which means it’s shrinking as a share of the population. What do you see as the biggest challenges the biking movement faces?

“There’s kind of a divide, a growing divide, between those cities that get it and are capitalizing on it and those that are not.”

I was pleased that this year at the National Bike Summit we had a big session on suburbia and suburban development. We’ve made such huge strides on the busy streets in cities. But the suburbs are the next great big frontier, and if we think downtown city streets are hard to change, then the expanse of suburbia that has yet to become bicycle friendly can be a little daunting without seeing the evidence that we saw this summer that this is changing, that people are retrofitting the suburbs…

It seems to me that there are places that clearly are getting it, the Portlands and the Boulders and the Davises, and the Minneapolises and the Memphises and the Louisvilles and the New York Cities and the New Orleanses. There, things are flourishing beyond our wildest dreams. My fear is that that success and that progress is not being seen in the suburbs. There’s kind of a divide, a growing divide, between those cities that get it and are capitalizing on it and those that are not.

I’ve been riding to work basically the same way for 25 years, the same trail, from Fairfax county through Arlington County into the District. There are 10 times the number of people riding in the morning compared to 25 years ago.

The challenge is: is that happening throughout Fairfax County? Is that happening in every community in Virginia? Probably not. It would be impossible to say that cycling isn’t thriving and growing in DC and Arlington. What I worry about is once you get off that trail in Fairfax County, the roads are still pretty challenging and intimidating. The schools aren’t very accessible. My kids aren’t riding as much as I would like them to.

I think there’s a generation of kids that we continue to lose to cycling and that we’re not getting invested in cycling. That would be on my list of big-picture worries. There’s not a widespread effort to make sure that every kid that leaves elementary school knows how to ride a bike and has an affinity to that activity.

It’s sometimes hard for me to imagine how we get from a world where bicycling is perceived as something for them and into a world where it’s perceived as something for everybody. The great strength of the bike movement is that we’ve got so many foot-soldiers who are willing to go out and throw themselves against the bayonets, and the great problem is that people keep throwing themselves against the bayonets.

“The door’s open. We’re at the table. Now’s the time to sit down and start talking to people like normal, rational human beings.”

I was in Nantes, France, for the Velo-City conference. From the mayor of Nantes up to the regional government, the national government who was there, the person from the OECD who was there — to a person, they said basically what we heard from the research up on Capitol Hill. People get that bicycling is part of the solution. That’s not really at question any more. The door’s open. We’re at the table. Now’s the time to sit down and start talking to people like normal, rational human beings… elected officials and heads of chambers of commerce don’t need to be beat around the head with the idea that bicycling is a good thing.

When we do the BFC program, there are too many places where we’ve seen the elected officials and the city staff saying, “Man, we need the advocates to catch up and give us the space to get stuff done.” The local cycling community isn’t helping them enough or showing up to the public meetings or playing the role that they need to to do the protected bike lanes and the more extensive treatments. That’s kind of the wake-up call for us. I look at what my next role might be, and I think, “Hmm, maybe that’s something we need to fix.”

You talk about Portland as a place where things have succeeded, and that’s true. But it also seems like you have the New Orleanses coming up while we’re at a plateau here or in DC, and biking is still far from mainstream. Why is that?

There’s a bunch of stuff you can do that’s relatively easy. I think places like Portland are at the place where the projects get tougher and the decisions get more complicated, and you start to have to make choices between parking and transit and cycling access and taxis. We won’t reach the next level in U.S. cities unless we start to deal with parking and with pricing and with stuff that ostensibly has nothing to do with cycling and actually has everything to do with whether people are riding or not. To make it harder to drive — not to be punitive, but to make a rational choice that actually it makes sense, as we get more people in cities, to make it possible to ride a bike and walk and not have to drive everywhere.

Here in Portland I think one of the things we’re missing with biking is the “Why.” If you could pick one “why” that advocates, city leaders, ordinary people would say more of, what would it be?

The one that seems to raise the most eyebrows for me is that the reliability of the bike is just unimaginable. I know exactly how long it takes me to get to work in the morning and how long it takes to get home in the evening. The bike is so reliable and flexible and adaptable. There is no one who goes by transit or drives that can say it with a straight face; it could take them 20 minutes, and it could take them two hours.

You’re right, I’ve never heard that one before. So what are you looking to do next?

The post Q&A: The League’s outgoing president on state of biking in Portland and beyond appeared first on BikePortland.org.