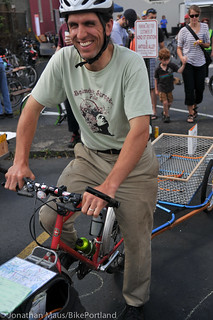 This article was written by Reuben Deumling, a Portland resident, active participant in the local cargo biking scene, and frequent commenter who some of you may know as “9watts.” You might also recall the cool, DIY wooden child seat he shared with us back in 2010.

I often read here on BikePortland about $5,000 singlespeeds and $6,000 cargo bikes, and I think about a lifetime of used or discarded bikes I’ve fixed up and ridden or resold. I enjoy the lines of a Vanilla or Ahearne or Bullitt as much as the next person, but choosing to live lower on the pecuniary totem pole, that is just not my market.

Part of the fun of not owning a car is that you avoid all the bills — gas, oil, insurance, parking, and repairs, (not to mention buying the car itself and eventually replacing it) — that come with it. For me, that statistic you read about that suggests the average car-owning household spends around $9,000 per year in car-related expenses, is inconceivable given how our household has chosen to spend money.

I’ve often gotten the impression that many people believe you have only two options when considering a new bike: (1) spend $1,500 at a local shop, or (2) reward thieves by looking for a questionable bike on Craigslist. My experience has been quite different.

The $400 we spend on bikey things in an average year goes for bikes (our daughter has used and grown out of I think seven used bikes already), parts, accessories, and the occasional tool ($270); bike trailers ($50); and panniers, helmets, and clothing ($90).

For me, the best part is that most of the money I spend on bikes and trailers and panniers and racks stays right here in Portland, and, like the bikes themselves, the money continues to circulate in our community.

Often here on BikePortland we discuss the fact that we-who-bike depend on the global economy, oil, and things made-in-China like everyone else, since our bikes and parts are now assumed to have been made over there and shipped halfway around the world. And this is probably largely true when it comes to a new brake pad or chain or derailleur cable. But taking a larger view of owning and maintaining a bike, it is possible to go about this in a manner that is far less dependent on that kind of commerce and rapid replacement schedule.

There are, after all, millions of used bikes, dumpstered tires, wheels left out on the curb, and used parts bins in bike stores. Holding on to the bike you have, or finding a decent used one, and making it last a lifetime is in most cases entirely possible. But does anyone still do this? Yes! And we don’t all have the same reasons.

For some of us there is satisfaction in making the cast-offs, garage sale bikes, and parts that someone else doesn’t want anymore work as well as whatever the Bike Shop or the internet has to offer this month. For others, the opportunity to avoid buying plastic parts made in Asia is a chief motivation.

Some of you might be tempted to dismiss this approach, and assume it is solely because we don’t have much money. But I think you’d be missing a lot if you did.

For me, the best part is that most of the money I spend on bikes and trailers and panniers and racks stays right here in Portland, and, like the bikes themselves, the money continues to circulate in our community. 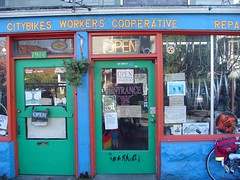 Citybikes is a good source for used parts.

The only bike I ever bought new was a 1987 Schwinn Cimarron MTB when I was sixteen. It cost $700.00. I’ve owned and ridden other bikes since then, but all were acquired used, and maintained or pieced together from my stash of parts. I can usually find a complete bike that may have retailed for a lot when new, but now just needs a tuneup, for less than $100. The bike stores I’ve long preferred also sell used parts and accessories. Looking through the bins at the Citybikes at 1914 SE Ankeny, or scanning Craigslist for (mountain) bikes from the late eighties always yields something useful and often fairly cheap.

Case in point: I rode my 28 year-old Schwinn mountain bike to Citybikes just this morning and came home with some lightly used Kool Stop cantilever brake pads for $4.00.

I don’t think any of us are getting rich recycling used parts into “new” bikes — but we end up with bikes that can serve us well, and that we are able to maintain, find parts for, and keep riding, year after year, decade after decade.

The post Guest article: Biking on the cheap appeared first on BikePortland.org.