By the end of this year Portland City Council will adopt a redevelopment plan that will have a huge impact on the central city — and it’s your job to make sure that plan includes a world-class vision for cycling.

As we first reported back in April, the Portland Development Commission wants to redevelop a 24-acre parcel of land bound by Union Station, the Broadway Bridge, NW 9th Avenue, and NW Glisan. NW Broadway — a major bicycle route into downtown — bisects the parcel. Beyond that, the future Green Loop that city leaders and planners say will create “Sunday Parkways everyday” will also run right through this parcel.

Suffice it to say, this is a golden opportunity to get biking right. But it won’t happen unless the PDC hears from smart people like you. Earlier this week the PDC opened up an “online town hall” to receive official comments on their Broadway Corridor Plan.

Here’s more about the plan from the PDC:

The Broadway Corridor Framework Plan will provide a comprehensive vision for this 24-acre portion of the Central City. While this area has long been envisioned as a potential regional asset, growth in the corridor has, until recently, been modest. Now, thanks to ongoing development in the neighborhoods surrounding the Plan study area, as well as the potential partnership with the United States Postal Service, the timing has never been better to identify how, when and what growth could occur here.

Creating the right mix of uses, activities, programs and public spaces for this area is, obviously, the challenge. Opportunities to reshape 24 acres of central city real estate don’t come along very often – and that’s where you come in. Your guidance and feedback as the process moves forward will shape this area’s development as a vibrant regional attraction for residents from throughout the city. 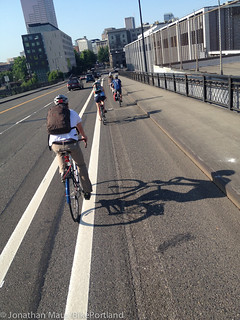 Looking south on Broadway with
US Post Office on the right.
(Photo © J. Maus/BikePortland)

As this and other nearby areas continue to grow, we’ll have to fit more people onto our streets. The best, most efficient way to do that is to make sure as many people as possible can choose to use a bicycle to get around.

The PDC is accepting comments via an online survey that will be open through July 19th. Two days later (on July 21st) they’ll have the second of three open houses for this project and they expect to have a final plan endorsed by City Council by October of this year.

We know from past experience that these lofty plans talk a big game when it comes to cycling, but they have tendency to make it only a minor consideration after auto access, bus and rail transit, business interests, and so on. Let’s not make that mistake again.

The post Time to weigh in on PDC’s Broadway Corridor Plan appeared first on BikePortland.org.