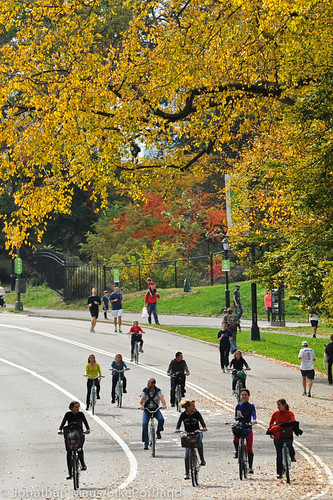 This week’s Monday Roundup is brought to you by Lumberyard Bike Park, who reminds you to sign your kids up for Summer Shred Academy camps.

Welcome to Monday! Before we get rolling, let’s look back at the best stories you might have missed last week…

The book on bikepacking: Salsa Cycles has long focused on adventure bikes. Now the company can say they wrote the book on it with their latest publication, The Bikepacker’s Guide.

What women want in New York City: Is it fear of traffic? Helmet hair? The New York Times delves into one of the Big Cycling Debates; how to get more women riding bikes.

More on that topic: Speaking of the gender gap debate; an article in The Globe and Mail spurred a pointed and pugnacious response by Toronto-based blogger Claire McFarlane.

DOT chief says we should let some roads die: Hearing a Department of Transportation director spout clear common sense about the future of roads shouldn’t be amazing — but it is.

Turning up density debate to 11: A committee tasked with finding solutions to the housing crunch in Seattle is considering doing away with single-family zoning altogether.

Paris updates signals: Bicycling demands a completely different traffic regulatory system than driving. Paris is the latest city to embrace that with new signals that have separate phases for people riding bicycles.

Big trucks = big fuel use: When we talk about reducing emissions from transportation, we must focus on big-rigs because they use a quarter of all motor-vehicle fuel, says the Brookings Institution.

Build it (with our taxes): The tide seems to have turned when it comes to raising money for infrastructure. Pew says dozens of states are making progress to pay for roads by methods like a gas tax hike. Come on Oregon! Let’s get with it!

Washington’s auto-centric transportation plan has a silver lining: Seattle Bike Blogger Tom Fucoloro holds his nose as he reports on on the highway heavy new transportation package up north — which also happens to include a sevenfold increase in funding for biking and walking.

Archetypal advocrat: City of Seattle traffic engineer Dongo Chang is the best kind of bureaucrat. He gets it. And more importantly, he isn’t afraid to get things — even bold and potentially controversial things — done.

Bike politics: A political party in Rotterdam (a Dutch city with over 1 million people) hopes to curry voters’ favor by giving free bikes to every high school student.

Helmet-less riding rationale: In America it takes guts to take a public stance against wearing a helmet while cycling. Even so, this reporter from Spokane did just that, but not without explaining her decision.

New York City’s carfree park binge: In the course of a few weeks, New York City has decided to prohibit driving in Central Park and Prospect Park. It’s a major victory for all humans in that city and hopefully will inspire other cities (cough, Portland, cough) to follow suit.

The post The Monday Roundup: Fewer roads, no cars, a bikepacking book, and more appeared first on BikePortland.org.