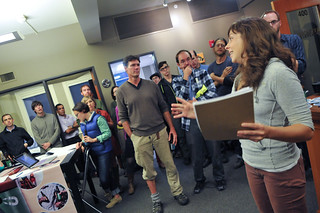 A scene from our last Wonk Night in October 2014.
(Photo © J. Maus/BikePortland)

Bicycling and safe streets activism in Portland is in a strange place these days. It seems to be simultaneously at its best and at its worst.

While there’s lots of action at the grassroots and independent activists make headlines almost weekly, more established groups are, in my opinion, struggling to find their place. The rise of social media has led to a disintermediation in the advocacy landscape that on one hand is empowering; but on the other often leads to many scattered voices that aren’t singing in tune — or in most cases, aren’t even reading from the same sheet of music.

Our advocacy ecosystem is full of life; but could it be healthier?

Let’s talk about this at a Wonk Night next Thursday (July 23rd), 6:00 pm, at 321 SW 4th Ave (4th Floor) in downtown Portland. Once again, we’ve partnered with our friends at Lancaster Engineering to host this event.

If you’ve never been to Wonk Night, here’s what you can expect: a lightly moderated discussion with some of the smartest people in Portland; a chance to share your perspective and get enlightened by others; a huge pile of panniers and bike bags in the corner of the room; plenty of free beer and other drinks; some light munchies; and a generally pleasing evening.

Our topic for the night is very timely and important.

We can complain all we want about Portland’s current lack of political will to reclaim streets for people, or about the general stagnation in what used to be America’s undisputed cycling mecca. But what if it’s our fault? What if we need to look in the mirror and not the telescope when it comes to finding a target for our frustrations?

Ultimately, it’s the public (us) that create political will. And it’s political will that smooths out friction in the gears of a bureaucracy. Portland can get its mojo back. The question is, are we pushing the right buttons and pulling the right levers? Are we working together as effectively as possible? Is there even a “we” to begin with? If not, should there be?

There are so many great people and groups doing important work right now. Here’s a quick list off the top of my head:

I hope to see leaders from these and other groups on Thursday night. Everyone is welcome to join us. All we ask is that you come with an open mind, respect for others, and a willingness to make things better.

For coverage of past Wonk Nights, check out our archives.

The post Wonk Night is back: Join us Thursday 7/23 to talk about activism in Portland appeared first on BikePortland.org.