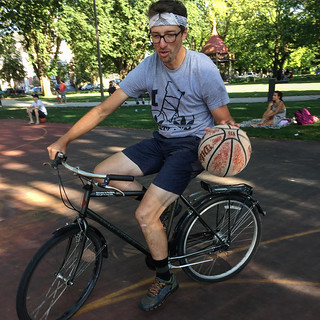 He shoots! He scores!
(Photos © BikePortland)

Unfortunately, things didn’t really go as planned. Only one other person showed up to the ride, so Alex Geraci and I spent about an hour clowning around the courts at Dawson Park (off North Williams Ave) and tried to play some bikesketball.

It was fun! And very challenging. But I’m sure that with more practice it could actually be played. I’ve been planning to share a few photos from that day just for fun, but just haven’t gotten around to it.

Then today I saw this story on FoxSoccer.com about the sport of “radball” being played in Germany (where it translates into “wheelball”).

So I figured now would be a great time to share those bikesketball photos. Because, every sport is probably better when played on a bike. And because it’s Friday. 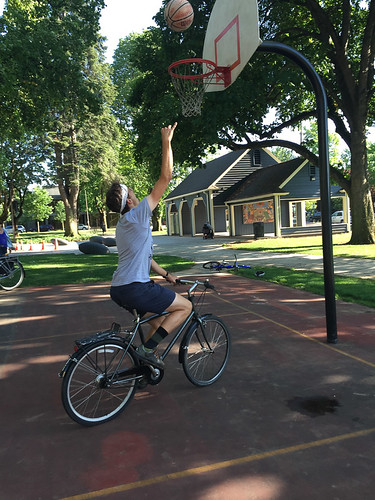 It went in. You’ll have to trust me.

Stay tuned for another invitation to play. Next time we’ll hopefully have enough people to split up into teams. And we’ll record it to show that world that soccer and polo aren’t the only sports that can be played on a bike!

The post All sports are better when played on a bike appeared first on BikePortland.org.