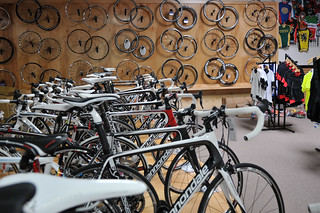 Most shops are just scraping by.
(Photo © J. Maus/BikePortland)

This week’s Monday Roundup is brought to you by Metro’s Bike There! Map, now available at local bike shops.

Portland and Rome: Sister cities? Portland Mayor Charlie Hales and First Stop Portland Program Director Nancy Hales are in Rome for a visit with the Pope. Mrs. Hales is blogging the trip and says (tongue-partly-in-cheek) our two cities have more in common than you might think.

Bicycles = America: Bicycles have had an incalculable impact on American culture, so says this New York Times article inspired by a current exhibit at the Smithsonian Museum.

Is your bike shop ripping you off? It’s a common meme among customers, but bike industry marketing pro Rick Vosper says it’s far from reality. In fact, industry sales statistics show they don’t make a nickel off the biggest item in the showroom: bicycles.

Revolving door: Cascade Bicycle Club in Seattle is looking for a new Advocacy Director. The new hire will be the fifth person in that role in as many years.

Minneapolis is NOT MESSING AROUND: While Portland dithers, Minneapolis does. That city’s elected officials have done something the City of Portland can’t seem to bring themselves to do: They made a real (and funded!) commitment to protected bike lanes. “30 miles by 2020,” doesn’t exactly flow off the tongue but it’s exciting nonetheless — if you live in Minneapolis.

More from Minn.: And to add insult to injury, our livable city rivals in Minneapolis have just voted to relax parking requirements and allow “no parking” apartments.

Even North Korea gets it: Bicycling is on the rise in North Korea, and the government is responding by building new infrastructure.

Robert Moses defends himself: Moses, long an enemy of urban planners for his love of freeways, tried to defend his record in an essay titled Are Cities Dead?, published in The Atlantic in 1962.

Letting TIGER go: Advocates are raising alarm over a move by a U.S. Senate committee to end the TIGER grant program, an important source of funds that have made many major biking and walking projects possible.

On the other hand: The League of American Bicyclists says the Senate Commerce Committee has passed amendments to the transportation bill that include “three wins for bicycling!”

One cop, 1,118 tickets to bicycle riders: If you ride a bike in Seattle, familiarize yourself with Police Officer Glen Mulkey. When you see him, ride the other way. As fast as you can.

E-bikes go postal: The Croatian postal service will start using e-bikes for mail delivery. And in an amazing Oregon-like twist the yellow and green bikes are called “FreeDuck2.”

Jan Heine, e-bike evangelist: Respected journalist and long-distance rider Jan Heine has proclaimed that “e-bikes are game changers.” That should settle it.

Racism a livable streets issue: We think a lot about how we use our streets, but should we talk more about who uses our streets — and how the color of someone’s skin influences how they’re treated while using them?

Shopping mall inventor regrets their impact: Did you know the man behind shopping malls blamed their offspring for destroying cities and said cars are as great a threat to public health as exposed sewers? Neither did we.

Undercover enforcement: The Oregonian shares the latest technology police are using to bust people who use cell phones while driving.

— If you come across a noteworthy bicycle story, send it in via email, Tweet @bikeportland, or whatever else and we’ll consider adding it to next Monday’s roundup.

The post The Monday Roundup: Fakes, malls, Moses, and a dispatch from Rome appeared first on BikePortland.org.