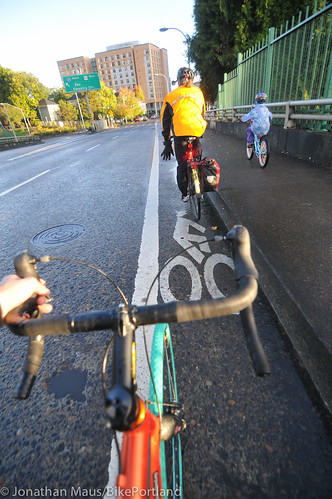 It used to be a tight squeeze.
(Photo © J. Maus/BikePortland)

Looks like I won’t have to feel sorry for the squished bike lane character on SW 6th anymore.

As you can see in the photo above, the bike lane on 6th where it crosses over I-405 in southwest Portland was so narrow that the bike lane character barely fit inside of it. Every time I’d ride by it I would cringe at how crunched up it looked — and get frustrated that PBOT would even allow any street to have a three-foot wide bike lane in the first place.

Now I’m happy to report that PBOT is widening this bike lane. Reader Barbara Stedman shared the good news and a photograph with me this morning… When I rode into downtown with Barbara and her family back in October 2012, I commented that this was the narrowest bike lane in Portland. Barbara knows it all too well: “It’s one of the pinch-points for people commuting from SW Portland via Terwilliger.”

For context, here’s what the area around this bike lane looks like: While it’s far from the safe and low-stress bikeway we need between southwest neighborhoods and downtown, getting a few extra feet of breathing room is a positive step forward.

Now of course the true test is what happens to this bike lane as it enters downtown at SW Jackson. It currently drops completely and leaves users in a shared lane environment.

I asked stalwart southwest Portland bike advocate Keith Liden about this project. Here are his thoughts:

“This is a great first step! The second trouble spot, which apparently will remain (at least for now), is the abrupt termination of the bike lane just before the pedestrian crossing at Jackson. Cars gaining speed at this point, the disappearing bike lane, the pedestrian crosswalk, and the left merging traffic from the 6th off-ramp, all conspire to make this a harrowing journey.”