At the Bureau of Transportation’s monthly “Lunch and Learn” sessions last week, I heard from Rosaisela Portugal and Lucia Llanos — two women working to get more people on bikes in the Cully neighborhood.

Portugal and Llanos are part of Andando en Bicicletas en Cully (ABC), a relatively new group that first came to life in 2009 but really got their feet beneath them in 2012.

Now, with several years of successful programs and rides under their belts, ABC seems to be hitting their stride. So much so, that leaders from the group like Portugal and Llanos are eager to spread the word and share what they’ve learned. 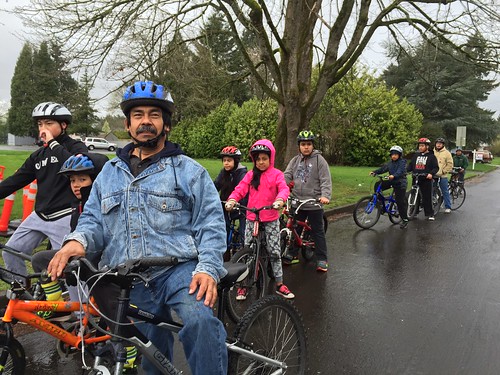 People on an ABC ride to Kʰunamokwst Park in March.
(Photo by Nestor Campos/Flickr)

As their name suggests, ABC’s work is focused on the Cully neighborhood’s Latino population. According to the 2010 Census, about 1 in 5 families in Cully are Latino, compared to 1 in 10 citywide. To reach them, Portugal and Llanos use a tried and true method: families first. Through an interpreter (the presentation was in Spanish), Portugal said, “In the Latino community, the incentive to participate often comes from parents’ desire to focus on their children’s education… And they believe it’s important to instill values such as an active lifestyle from a young age.”

To get families interested in cycling, ABC leads rides in the neighborhood, hosts bike repair workshops, and attends community events.

And it appears to be working. ABC led a ride to Whitaker Ponds near the Columbia Slough last year and 20 people showed up. This year there were over 50. Kids have become an ever growing part of the group’s events. Llanos shared that when they first started, they would go door-to-door asking parents if their kids could come for a ride. These days, once kids see the ABC group rolling down the street, they just grab their bikes and join in, without their parents.

“They want to be a member of the cycling community… it’s a way they can learn how to become part of the greater Portland movement that is happening in a way that is culturally relevant to them.
— Rosaisela Portugal, ABC

They described a positive feedback loop: parents get the kids involved to keep them active and productive, then the kids start having fun and they, in turn, get the moms and dads on bikes. Before long, the entire family is biking in the neighborhood.

Beyond riding bikes, Portugal and Llanos said their work has larger cultural implications.

“Latinos are not born with a bike between their legs,” Llanos said, “so it’s important for the kids to be exposed to it and get inspired to ride at an early age.” Portugal added that, for young people, getting involved with ABC, allows them to have a voice and be more visible as an active member of the United States and city of Portland. “They want to be a member of the cycling community… it’s a way they can learn how to become part of the greater Portland movement that is happening in a way that is culturally relevant to them. And it’s happening through their families.”

During a Q & A I asked the women if they’ve noticed an increase in people riding bikes for everday errands and transportation. “Por supuesto que si!” “Of Course” they said.

“Many of the moms in Cully are stay-and-home and are busy,” continued Portugal (through interpreter), “And a way they stay healthy is to load up the kids in the trailer and go to the store. That’s childcare, exercise, and a trip to the gym all at once!”

Looking forward, ABC wants to expand beyond Latinos. Llanos spoke about how bicycling could impact Somali immigrants in the neighborhood, especially Somali women. “It’s for everybody, not just Latinos.” She’s also encouraged by how many women are showing up to their events. “Often times Latinos see biking only as a male sport. We are bringing it to women and putting them in positions where they can be active leaders.”

— If you’d like to learn more about ABC and meet the people behind it, don’t miss Sunday Parkways Northeast this weekend. ABC has partnered up with the City of Portland to host a Bilingual Bike Fair where they’ll teach kids safe cycling practices. The Fair will be held at Kʰunamokwst Park (4900 NE 52nd Ave) from 11 a.m. to 4 p.m.

The post Cully advocates focus on Latinos through families and community appeared first on BikePortland.org.