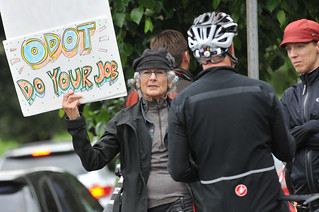 A protestor at the May 11th rally held at SE Powell and 26th.
(Photo © J. Maus/BikePortland)

The Oregon Department of Transportation is ready to share their plans for making SE Powell Blvd safer. Their “Powell Boulevard Safety Project” will spend $3.8 million on the segment of the roadway between 20th and 34th.

The project includes the intersection of SE 26th where Alistair Corkett was involved in a collision back in May that resulted in his leg being torn off. Then a few weeks later another man was seriously injured from a collision in the same intersection.

While their Powell project isn’t slated for construction until 2017, ODOT fast-tracked a left-turn signal at Powell and 26th immediately following those two collisions.

According to ODOT, this stretch of Powell, “has a history of problems, including a high rate of rear-end and turning crashes involving bicyclists, motorists and pedestrians.” As contributing factors for these crashes, ODOT lists, “poor visibility, limited sight distances, frequent left turns and side streets too close to one another for optimal safety.”

ODOT doesn’t list high speeds as one of the problems.

While safety activists and local residents dream of a kinder and gentler Powell, it’s important to note that it’s a state highway (26) and it carries a very high volume of motor vehicles. ODOT considers it to be, “the main road between Portland and Bend.”

That being said, here’s what ODOT will do with the $3.8 million:

Without speed on ODOT’s radar, we worry that “improving sight lines through the corridor” will encourage people driving on SE Powell to go even faster.

If you have thoughts to share with ODOT about this project, consider showing up to the open house Thursday night (7/30) from 5:00 to 7:00 pm at First Floor Cafe at Catholic Charities (2740 SE Powell Blvd). You can also send questions and feedback to ODOT Community Affairs Coordinator Dee Hidalgo via email at Dee.Hidalgo@odot.state.or.us.