Update 5:45 p.m.: Police now say that only the southeast sidewalk (upstream, closer to downtown Portland) is closed and that officers were mistaken when they previously blocked people from crossing the bridge on bike or foot.

“It was just that someone didn’t get told,” Portland Police Bureau spokesman Sgt. Greg Stewart said Wednesday evening. “We’re just having people use the other side of the street.”

Some Portland police officers ordered the sidewalks of the St. Johns bridge closed to foot and bike traffic in response to a direct action on the bridge Wednesday.

Late Wednesday, police changed their operation and closed only the southeast (upstream) sidewalk to people on foot or bike.

The action, organized by environmental group Greenpeace, aims to block a Shell Oil ship from heading to the Arctic. The Oregonian and other outlets reported Wednesday that activists are prepared to remain dangling from the bridge by rope for days. A police spokesman said the sidewalks would remain closed until the rope-sitters are gone.

The bridge is the only bike-foot crossing of the Willamette River between Longview, 50 miles to the northwest, and the Broadway Bridge in downtown Portland. The lanes of the bridge, which have relatively high speeds and low-visibility but are marked with sharrows, remain open to people on bikes and in motor vehicles.

Hamilton described the Greenpeace action as “to stop an icebreaker from leaving for the polar ice cap, or at least what’s left of it.” 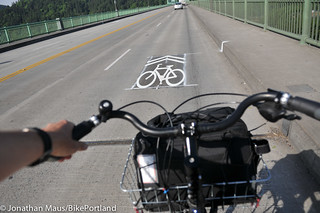 Sharrows were added to the St. Johns Bridge in 2012.

Portland Police Bureau spokesman Sgt. Greg Stewart said Wednesday that his understanding is that police officers will be stationed at the sidewalks on the bridge landings, turning sidewalk traffic back. Stewart said there are “several” reasons to close the sidewalks, but that the “primary” one is the safety of the demonstrators.

“The ropes are accessible, and there could be conflict between the parties up there and other people crossing,” Stewart said. “We want to be extra certain given that they’re hanging, it looks like a couple hundred feet in the air, that they’re safe.”

“There’s a whole host of things that can happen when people are 300 feet over a railing and things are really tense,” Stewart said. “Until that’s resolved, there won’t be any pedestrian traffic.”

Oregon Department of Transportation spokesman Don Hamilton said Wednesday that his agency, which oversees the bridge, is complying with a police request early this morning to close the sidewalk.

Hamilton said the demonstrations began around 1 a.m. Wednesday. The Portland Mercury has a summary of the action itself.

“We have no estimated time right now for reopening,” Hamilton said.