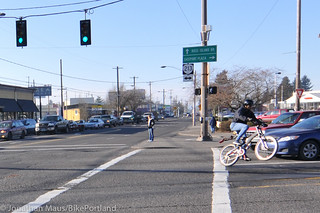 Not currently a spot for
low-stress rolls.
(Photo: J.Maus/BikePortland)

Southeast Foster Road feels a long way from the heart of Portland’s transportation conversation at the moment. But that’s not going to last long.

Next year, right in the middle of Portland’s mayoral election, Foster is scheduled to be the site of the city’s most ambitious road diet yet, a conversion of passing lanes to bike and turn lanes that’s widely expected to create auto spillover onto other streets even as it dramatically improves the safety of driving or crossing Foster, which is currently one of the city’s 10 high-crash corridors.

The new bike lanes will be nothing more than paint, but six-foot-wide or buffered. And in a comment beneath Tuesday’s story exploring how to divvy up Portland’s bike-infrastructure budgets, BikePortland reader Gutterbunnybikes made an interesting case that those bike lanes will be more important than you think.

Why? Because unlike almost every other bike lane in Portland, they’re going to run right through commercial districts.

Here’s Gutterbunnybikes’ answer to the question of whether Portland should prioritize coverage (a big, far-flung network) or ridership (a high-quality, heavily used network).

I think honestly think you can have both. It’s just that the thinking has to change on what the system as whole is and should be doing. If we actually started connecting commercial districts instead of skirting them, you get both. But Downtown is the only commercial district the city wants to connect to the bicycle grid.

You will dramatically increase ridership numbers and geographic influence if you plan right. Instead of half-assed 20’s and 50s projects – why were these routes not taken 10 blocks west which would have put the bicycle access in the heart of the main east side commercial districts instead of 10 blocks away from where everyone wants to get to in them?

And you wait because Foster does connect commercial districts – once implemented it will be a game changer for future planning. Foster (coupled with Clinton and Tilikum) is going to be huge, once completed it’s roughly 5 miles of near complete (other than Clinton being two blocks off Division) commercial access for bicycles from 90th to over the bridge to Downtown.

As long as no one is willing to adequately connect all the commercial districts, all the projects which aren’t central city will fall short. And at some point, without better access from outside of central city even those projects will fail in that no one will be able to get to them.

In a separate comment, Gutterbunnybikes replied to another reader who offered to bet $100 that Foster’s painted bike lanes will be “very low use,” perhaps similar to the ones along NE Broadway between 15th and 24th.

Foster already sees a pretty good amount of bicycle traffic. I’d likely guess near the same numbers of some of the outer and mid east side greenways. Since most the street side parking (defacto bike lane) is usually vacant, the FOPO section really isn’t too bad to ride, and I’ve often done my own counts on the east of 82nd parts where bicycles on sidewalks usually outnumber or equal the number of pedestrian traffic (including people waiting at bus stops) through that stretch.

In my modest opinion, I suspect Foster is going to increase bike share overall more than the 50’s and 20’s greenway projects (combined even).

Whether Foster Road’s redesign leads to pitchforks, praise, or both, it seems likely to shape the next five years of road redesign decisions in Portland for good or bad. Whether or not biking actually improves much along the way is anybody’s guess, but at least we know what this Foster-area resident is putting money on.

Yes, this feature is back after a hiatus caused by a long string of busy weeks — and yes, we pay for good comments. We’ll be sending $5 and a little goodie bag to Gutterbunnybikes in thanks for this one. Watch your email!

The post Comment of the Week: SE Foster, the heart of Portland’s coming bike grid appeared first on BikePortland.org.