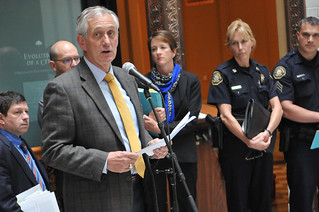 Today in East Portland we’ll get our first look at how serious Mayor Charlie Hales is about Vision Zero. He’s set to announce the Vision Zero Task Force as well as strategies and actions he and other leaders will work on to put weight on the bones of his promises to reduce traffic deaths and injuries.

As we reported last month, Portland’s Vision Zero Action Plan will be a city-wide approach to traffic safety that will go far and beyond work already being done by the Bureau of Transportation.

Today’s announcement will take place at the headquarters of the Asian Pacific American Network of Oregon (APANO) at SE 82nd and Division. PBOT says the event will the, “Announcement of a major step forward in the community-wide effort to achieve Vision Zero.”

Here’s the list of local leaders and electeds expected to be at today’s event:

To clarify, there are two things going on here. PBOT is already moving forward with Vision Zero-related work as part of their internal action plan. This larger effort (slated to be completed by October of 2016) that includes a new Task Force aims to transcend PBOT and connect the Vision Zero work to other agencies and community groups.

Stay tuned for coverage from the announcement.