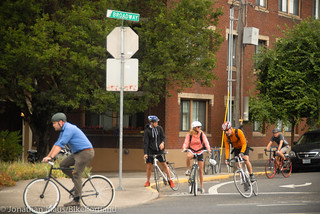 A popular route for bicycling will change a lot when school starts later this week.

On Thursday the currently vacant school on North Flint Avenue just south of Russell will become the temporary home for Faubion School. Faubion (which serves kindergarten through eighth grade) will move from their northeast Portland location while their school is rebuilt over the course of the next two years.

Flint is a popular connection between the bike lanes N Vancouver Ave and N Broadway. The move means that what used to be a quiet backstreet for thousands of bike riders each day will see a lot more auto traffic.

The situation warranted a press release by the bureau of transportation yesterday. PBOT is recommending that people who want to avoid the traffic — especially during the morning and afternoon pick-up and drop-off times — stay on Vancouver to Tillamook before getting back onto Flint. Faubion has just over 500 students and according to the city’s most recent Safe Routes to School survey over 40 percent of them walk or bike to school. However, that survey also showed that all those walking and biking trips were made by students who live one mile or less from the school. With the temporary location on Flint being over five miles from Faubion, both Portland Public Schools and PBOT, “anticipate that the… distance between the two sites will result in more families driving to school.”

PPB and PBOT are working together with the public, students and families to help with traffic issues. PPS held a bike breakfast at the site last week to spread the word about the change and they say bus drivers have gotten special training on how to maneuver “in a highly bicycle trafficked area.” PPS will also work with the city’s Safe Routes program to encourage bike trains, walking school buses, ride sharing, and other options to driving.