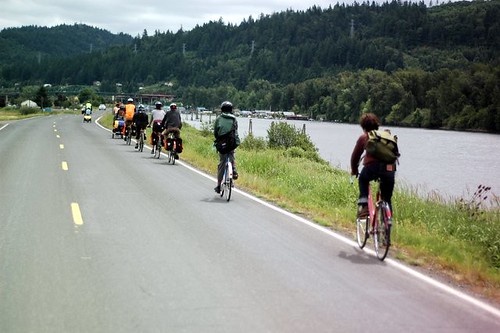 Is too much cycling on Sauvie Island a bad thing? Should the County collect a fee from riders?
(Photo © J. Maus/BikePortland)

“Support the use of bicycle transportation alternative to automotive use without encouraging purely recreational bicycle activities that may increase this level of vehicle conflict on roadways.”
— Policy 5.6 of the draft Sauvie Island and Multnomah Channel Rural Area Plan and Transportation System Plan

Multnomah County will host a public hearing for the Sauvie Island and Multnomah Channel Rural Area Plan and Transportation System Plan (PDF) this Thursday and a veteran advocate who sits on the County’s bicycle and pedestrian advisory committee says some policy language in the plan is “unacceptable.” That same advisory committee referred to the language as “discriminatory.”

Sauvie Island sits about 10 miles north of downtown Portland. Its beautiful roads, proximity to Portland, and rural character have made it a popular place for many people — in cars and on bikes — who want to escape the city and enjoy the island’s farms, markets and beaches. According to the Sauvie Island Community Association, over 1.5 million people visit every year. Last year the County counted over 1,700 bicycle riders on the island during the month of October, with some weekends seeing over 350 riders per day.

Because the roads are narrow and people don’t always use them with enough caution and consideration for others, and due to the island’s active agricultural and farming operations, traffic safety was a key component of the transportation system plan update. From the start of the planning process nearly two years ago, we expected that cycling and road safety would play a major role in the plan’s development.

What we didn’t expect was the Planning Commission’s draft policy language that would make it official county policy to discourage bicycling on Sauvie Island.

Andrew Holtz, a member of the Multnomah County Bicycle and Pedestrian Advisory Committee, emailed us this morning to say he’s concerned about a specific policy that has remained in the draft plan despite the committee’s insistence that it should be deleted.

Here’s the language Holtz and the bike advisory committee are concerned with. It’s Policy 5.9 in the Manage Travel Demand section of the draft Sauvie Island/Multnomah Channel Transportation System Plan (emphasis mine):

“Implement a range of Transportation Demand Management (TDM) policies encouraging existing businesses and requiring new development (beyond single family residential use and agricultural uses) to help reduce vehicle miles traveled (VMT), maximize use of existing facilities and alleviate congestion on US 30 and county roads caused by seasonal and special event traffic. Support the use of bicycle transportation alternative to automotive use without encouraging purely recreational bicycle activities that may increase this level of vehicle conflict on roadways.”

Additionally, project number 15 in the draft plan’s list of “Planned projects and programs” states that the county would work with Oregon Department of Fish & Wildlife to implement higher auto parking and permit fees and possibly limit the number of permits. That project would also “include bicycle permitting.”

At an April 15th public workshop hosted by Kittelson and Associates Inc. (the consultants on the plan update), the idea of tolling bicycle riders was suggested. Kittelson included that idea in a technical memo sent to Multnomah County back in June:

Another comment from someone on the plan’s Citizen Advisory Committee put it more bluntly: “Do not attract more bicycles to the area.”

At the July 8th meeting of the Multnomah County Bicycle and Pedestrian Advisory Committee, members discussed who on the island is opposed to cycling. The draft minutes from that meeting (which aren’t published yet, but were sent to BikePortland by request) state that there are several groups of Sauvie Island residents who oppose “recreational cycling” — including members of the Sauvie Island Community Association.

(A study of traffic data by Multnomah County showed that there were no reported crashes involving people walking or biking on any county roads on Sauvie Island between 2007 and 2013. The majority of crashes that were tracked involved motor vehicle operators who hit a fixed object or ran off the road.)

The County Bicycle and Pedestrian Advisory Committee wants the comments about discouraging “recreational cycling” to be removed entirely from the draft plan. They say the County has a responsibility to all of the island’s road users — including people who use the roads for cycling.

Instead of a policy that discourages cycling, the advisory committee “felt overwhelming” (according to its meeting minutes) that the County should actually be encouraging cycling.

Holtz says, “It’s time to make sure the County commissioners hear from people,” about this issue. He’s urging everyone with concerns about these policies to contact the County’s planning staff via email at simcplanning@multco.us*. Holtz also says it would be helpful to contact Multnomah County Chair Deborah Kafoury (mult.chair@multco.us) and District 1 Commissioner Jules Bailey (district1@multco.us) in advance of Thursday’s hearing. *Note that today (8/25) is the final day to submit written comments about this plan.

If you have time to make a public comment in person, the Multnomah County Board of Commissioners meets Thursday (8/27) at 9:30 am and this Sauvie Island Plan update is the first thing on the agenda.

UPDATE, 2:45pm: County spokesman Dave Austin tells us that County Chair Deborah Kafoury and Commissioner Jules Bailey are aware of the language in the draft plan and on Thursday they plan to propose an amendment that will strike the language from the plan. Austin added that it’s standard procedure for the Chair and Commissioners to allow the Planning Commission to go through their complete plan development process without weighing in about specific input until the public hearing.

A reader also shared an email response he received from Kafoury’s office today:

“I wanted to follow up and let you know that Chair Kafoury was surprised by the language that the Planning Commission included differentiating recreational uses from other bicycle uses. She is working on an amendment that will strike that language in concert with Commissioner Jules Bailey. The amendment will likely be discussed this Thursday and adopted next week.”