Portland City Council unanimously adopted a resolution this morning that gives the bureau of transportation more strength and clarity in how they design and manage neighborhood greenways, the residential streets formerly called bicycle boulevards where biking and walking have priority over driving.

“Greenways were a big part of helping me feel safe and comfortable as a bicyclist. I’m hoping that adoption of this report will help more of my peers be safe and comfortable on their bikes instead of just opting to drive right away when they get their license.”
— Isabelle McTighe, junior at Cleveland High School

The Neighborhood Greenways Assessment Report (PDF here) is a 55-page document that outlines the current state of the network, explains its weak points, and lays out solutions to make them better. Today’s action by council didn’t come with any funding for new projects, but it gives PBOT engineers and planners important policy guidelines. More importantly, the report and its nearly two-hour long public hearing at City Hall today has given neighborhood greenways, and cycling in general, a major political boost.

The context of the report and how we got to this point is important to keep in mind. PBOT was forced to do something about neighborhood greenways because users of them have been yelling and screaming for years that they’re not living up to their “low-stress” promise. Those complaints turned into organized actions and even helped spur the formation of a new activist group, BikeLoudPDX, that made the uncomfortable cycling conditions on SE Clinton Street their raison d’être.

PBOT Bicycle Planning Coordinator Roger Geller was one of several people who mentioned the impact of activism at City Hall this morning when he said during his testimony to Mayor Hales and the rest of council, “We’re getting a lot of complaints from citizens that some of these greenways are not working well.” And PBOT Active Transportation Manager Margi Bradway also mentioned it. “We’ve heard a lot of concern about Clinton Street in particular,” she said during her presentation. BikeLoudPDX volunteers were easy to spot in council chambers.

Several of those concerned citizens took time out of their day to testify and show their support for better neighborhood greenways. Volunteers with BikeLoudPDX wore green and held up signs throughout the proceedings. One family brought their two young children up to the microphone to testify. Isabelle McTighe, A 17-year-old Cleveland High School student, told City Council that she’s been biking in Portland since she was four years old. “Greenways were a big part of helping me feel safe and comfortable as a bicyclist,” she said. “I’m hoping that adoption of this report will help more of my peers be safe and comfortable on their bikes instead of just opting to drive right away when they get their license.”

Of the 15 members of the public who testified, 14 spoke in support of better greenways. One 12-year-old Hawthorne Middle School student said he wants more traffic diverters to keep driving to a minimum on inner southeast sidetreets. “I don’t feel safe riding on them anymore frankly, because drivers have been aggressive toward me… like screaming at me and throwing things at me. I’d like to feel safer riding on them,” he said.

“We can’t shut down the city everyday like we do on Parkways… but we can build in the technology everyday to make those conditions possible.”
— Commissioner Nick Fish

When it came time for commissioners to ask questions, Nick Fish put on quite a show. He had pointed questions and shared genuine anger about people’s dangerous driving behaviors.

Fish wanted to make sure that the report he was voting on didn’t direct PBOT to allocate any funding to specific projects or programs. “I think we have to be clear with the public what we’re signing onto today,” he said. I think this was a smart move motivated more by a keen sense of PR rather than any personal reluctance to fund bike projects. Fish probably remembers how the passage of the 2030 Bike Plan backfired when the media (and then the public) turned it into a controversy by incorrectly assuming that the city had just agreed to spend over $600 million on bike projects (don’t we wish!).

Fish also asked about what changes PBOT would make when streets passed the 2,000 cars per day threshold set in the new report. Speaking to Geller, he asked, “What’s the state of our engineering toolkit?”. 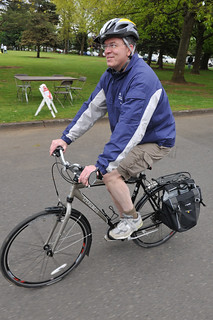 And Fish is very fired up about dangerous drivers. He talked about how as congestion increases, people are turning to residential streets and driving with frustration and anger. “Everyone is in such a damn rush they’re putting everyone else’s lives at risk,” he said. “And that’s what we want to discourage.”

A resident of inner-northeast Portland, one of the most bike-friendly areas of the city, Fish spoke about the “transformative” and “exhilirating” experiences he has had during Sunday Parkways and how that event, “Reminds us what it is to be on a dedicated bike pathway that’s safe.” “That ought to be the goal,” he continued. “We can’t shut down the city everyday like we do on Parkways… but we can build in the technology everyday to make those conditions possible.”

Amanda Fritz wanted to know about ridership demographic data and funding of greenways in east and southwest Portland. “Why is there no greenway from east Portland into downtown?” she wondered. Even Commissioner Saltzman, known for being quiet and certainly not expected to chime in much on transportation issues, had something substantive to say. He said he and others are sometimes confused by bike-specific roadway markings and he urged PBOT to have more signs that make it clear to road users when they’re on a neighborhood greenway.

In closing comments before the 5-0 vote was recorded, PBOT Commissioner Steve Novick offered a good summary of what it means to have passed this resolution. “We will put up more diverters. We will put up more speed bumps. And we’ll get calls from people [who don’t like it]… And now we can say, ‘Actually, that’s a neighborhood greenway and we’ve given direction to PBOT to take steps to make sure that it’s used as a greenway.’”

Today’s council meeting was about more than the neighborhood greenways report. It was the most complete and compelling education about cycling that our five elected city leaders have gotten in as long as I can remember. And it came from not only their own staffers and well-known advocates like the Bicycle Transportation Alliance (who also shared excellent testimony today); but also from everyday people who spoke from the heart. And they took it all in very well. Their engagement with the people who testified and the volume and content of their questions showed that they respect neighborhood greenways and the role cycling in general plays in Portland.

For a city council that we’ve had public misgivings about for their lack of perspective and experience around cycling issues, what I saw and heard this morning was a breath of fresh air.

With past cycling-related controversies fading over our shoulders, the emergence of new, powerful, and unifying initiatives like Vision Zero and neighborhood greenways along with new faces to advocate for them (both in the community and in city staff), it feels like today was the start of something. Maybe we’re emerging from the dark cave of stagnation that we’ve been struggling with for years.

And to top off what I felt was an extraordinarily positive council meeting, Mayor Hales nonchalantly announced right before moving on with the agenda that he’ll commute into work next Monday (8/31). Stay tuned for more about that — and hopefully other things that herald Portland’s biking renaissance — in future posts.