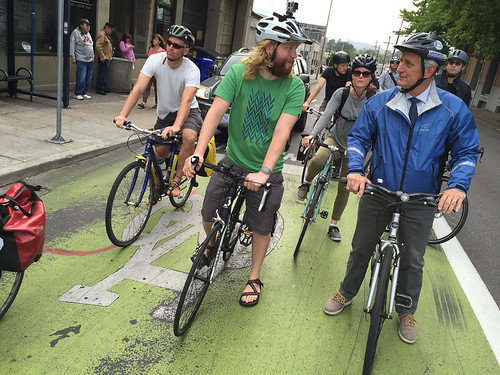 Portland Mayor Charlie Hales biked into work today. That should not be a headline; but it is. 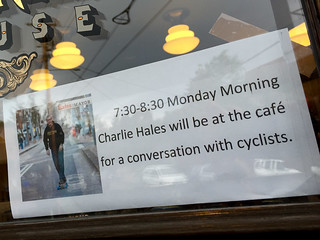 After over two years of being all but silent about cycling, Hales appears ready to start a new chapter in the Portland bike story. Heeding the requests of many people in this city who care deeply about cycling, Hales rode his Trek hybrid from his home in Eastmoreland to Clinton Coffeehouse on SE 26th and Clinton and then made his way to the Hawthorne Bridge and eventually City Hall.

It’s the first time he’s commuted by bike since he took office in January 2013.

When I walked in around 8:15 or so, the back room of the coffeehouse was buzzing. Hales, coffee mug firmly in hand, spoke to a table of two in the corner while about two dozen other people had side conversations. Portland Police Officer Cage Byrd, who has been assigned to act as a bicycle issue liaison to the community, was there. The mayor’s public safety policy advisor Chad Stover was there too. Stover has been instrumental in the SW 3rd project, which began as as effort to tame the streets of Old Town during late night club hours. KGW reporter Tim Gordon was also there (and he just filed this story). 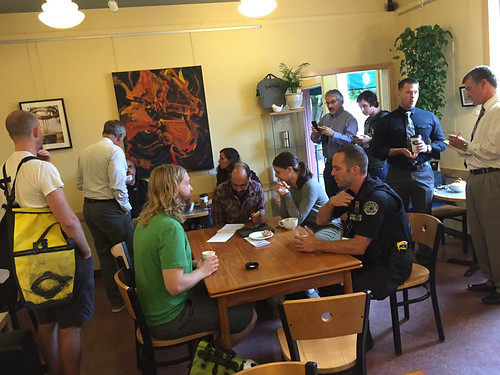 Mayor Hales is in the upper left. 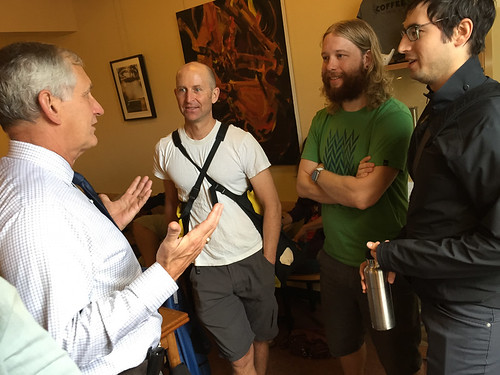 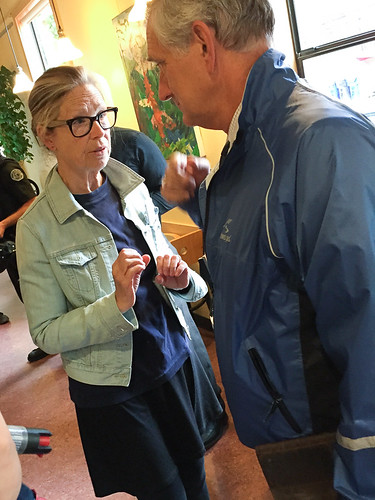 I wanted to eavesdrop on a few conversations and hear what people shared with the mayor — and how we responded. As I made my way over to him, I ran into Chris Rall. Rall, 44, lives at SE 54th and Division and rides on SE Clinton with his young child to pre-school near OMSI. Rall said he showed up to tell the mayor what he thinks about riding conditions on Clinton. “It’s doable,” he shared with me, “But it could be better, especially between 21st and 11th.”

Joan Childs showed up to bend the mayor’s ear on a different topic: people who live on the street. Childs, 65, told me she moved to Portland four years ago from Manhattan in large part because she wanted to live in a place where she could walk, bike, and take transit. (Learn more about Childs in this recent New York Times profile.) She bought a step-through “Dutch bike” from Clever Cycles and had every intention of becoming a regular rider. But it didn’t work out that way. “I’ve only ridden it four times in the last four years,” she said. “I’m terrified to ride in the streets. I didn’t realize there would be all the cars and buses and trucks turning into me all over the place.”

Beyond her fears of riding in traffic, Joan said her bigger beef with the mayor right now is that, “Homelessness is out of control.” “I love this city,” she continued, “But what’s happening here with all the homeless people is unacceptable… What I’m hearing from everyone is that it’s gotten out of control.”

In case you haven’t seen the local news headlines recently, Joan isn’t alone. And it’s important for anyone who cares about cycling to understand that Mayor Hales is simultaneously juggling several urgent livability issues: The amount of people living on Portland’s streets, the troubling amount of shootings and gang violence, and the affordable housing/development/density issues are all demanding his attention.

And for the first 30 months of his administration, Hales made a strategic decision to not give cycling much attention at all. Kyle Rohr showed up this morning to ask him why. When I grabbed Rohr after his conversation with the mayor he said, “He [the mayor] wanted to stay quiet [about cycling] during the Street Fee stuff.” Rohr was referring to Hales’ and Transportation Commissioner Steve Novick’s decision to focus on “paving and maintenance” as they pushed their “Our Streets” transportation infrastructure funding proposal.

Now with that political hot potato behind us, Hales has more leeway to publicly embrace cycling.

When it was time to get on our bikes and head downtown the group (which numbered about 7-8 people) headed west on Clinton. We then turned right on 21st, went through Ladd’s Addition then made our way onto SE Clay. From Clay we took 6th over to Main and then onto the Hawthorne Bridge. 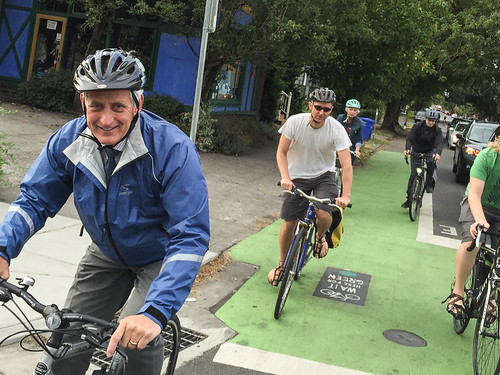 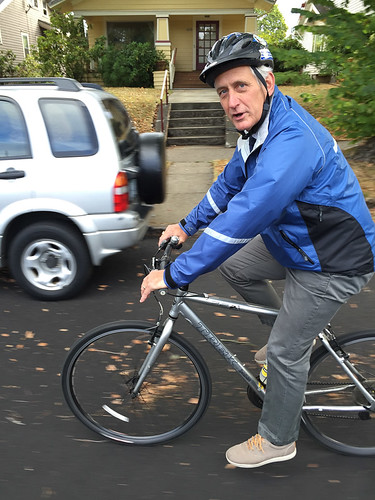 He looked pretty natural on the bike and wore a tie,
slacks, dress shirt, rain jacket and business casual shoes. 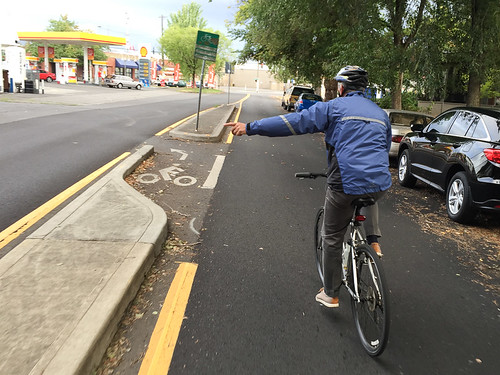 He rode in the front and used turn signals. 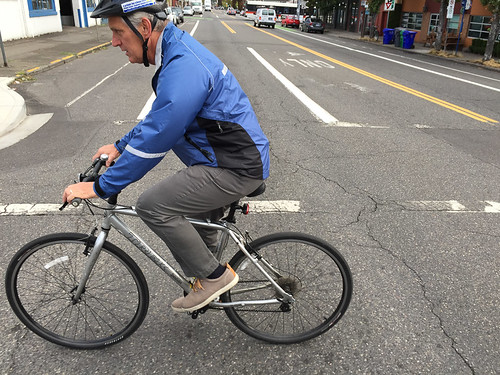 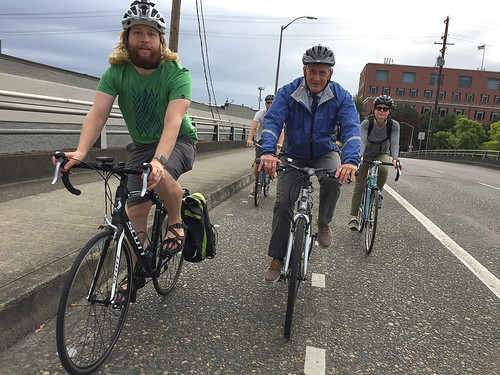 Heading toward the Hawthorne Bridge on the viaduct.

The ride to the bridge was mostly smooth and uneventful. Then, about three-fourths of the way over the bridge span, our group — which was riding at a social pace — was passed by a man riding very fast. He yelled something at us as he went by and was clearly angry that we slowed him down. He also spit on the ground in front us after he passed.

I explained to the mayor that that type of interaction usually ellicits one of two responses: People either bemoan the horrible lack of courtesy displayed by some bicycle riders (a.k.a. “jerks”), or they bemoan the horrible state of our bikeways that are so narrow people can’t easily pass without incident.

After that unfortunate encounter we dropped down off the bridge into downtown and the notorious 2nd and Main intersection. We had a red light at 2nd and ride participant Josh Chernoff took the opportunity to explain the poor conditions to Mayor Hales. At 2nd and Main the bike lane abruptly ends, the pavement is broken-up and full of bumps, and there’s a bus stop that merges over the lane. 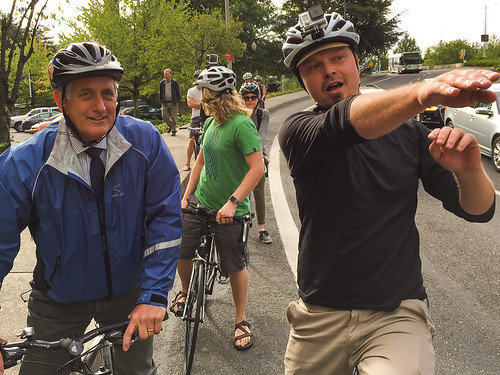 Josh Chernoff explaining his concerns about 2nd and Main. 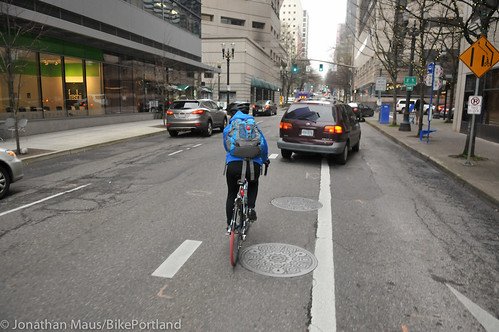 Existing conditions on SE Main between 2nd and 3rd.

Hales didn’t need an explanation. He could feel how uncomfortable and stressful his cycling environment had suddenly become. “What can we do about this!?” he asked.

At SW 3rd, the mayor realized he needed to get over to City Hall. Behind him were the disconcerting dangers he’d just experienced and in front of him was the infamous pinch-point at the Elk Statue between Chapman and Lownsdale squares. Not surprisingly his instinct was to pull up onto a sidewalk and walk the rest of the way. Even with this short experience, I think the mayor now better understands why we need a protected bike lane network downtown.

Hoping to taking advantage of every possible minute of the mayor’s time, a few of us walked with him to City Hall.

Adam Herstein, a vocal bike activist on Twitter known for chiding Portland’s timidity around cycling infrastructure, seemed pleased with the outcome of the event. “It’s definitely a good start,” he said, after shaking the mayor’s hand. 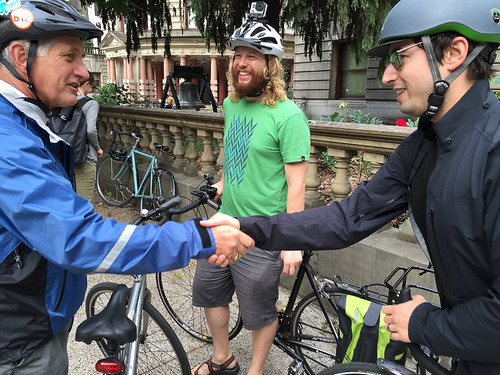 The start of a beautiful friendship?

Getting the mayor out on the streets on his bike is something many people have been clamoring for. And indeed, this morning’s event was a great sign of things to come. And Hales tells us this is only the beginning. He’d like to ride and experience conditions in other parts of the city.

As for whether these experiences will lead to tangible changes in policy or infrastructure, that’s hard to tell. But change starts with awareness and conversations.

For Kyle Rohr, who had several minutes of conversation with the mayor today, it all sounds great. “But,” he said, “I don’t know what I can trust.”

— Correction: The original version of this story mentioned the intersection of SW 2nd and Madison. It should have been SW 2nd and Main. Sorry for the confusion.

The post Here’s what happened when Mayor Hales biked to work for the first time appeared first on BikePortland.org.