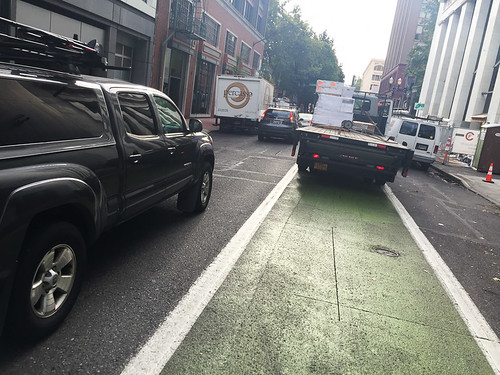 All too common view on one of downtown’s “best” bikeways.
(Photos © J. Maus/BikePortland)

I’m not one to get upset and complain at every little biking injustice I come across everyday; but when things reach a point of absurdity and highlight a larger problem, I think it’s reasonable to make a fuss.

On my ride into work this morning I encountered three large trucks and one van completely blocking the bicycle-only travel lane on SW Stark Street. What really made me stop and do a story about it is that these four vehicles blocked the lane in a span of just four blocks. I came up on the first one and was like, “Sheesh, come on.” Then I saw the second one and I was like, “No way!” Then I saw the third and then fourth ones and I was like, “Seriously!?”

And they weren’t stopped just “momentarily” as Oregon law allows. They were stopped for several minutes at least while doing some pretty major unloading and construction work. 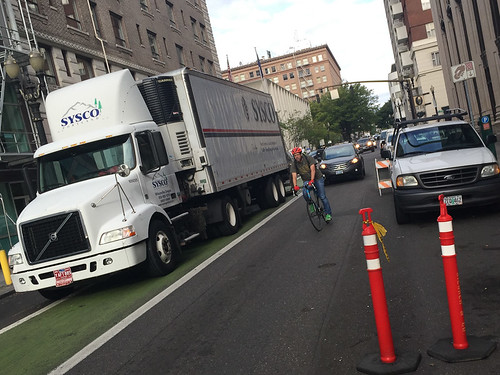 Sysco Corporation responded to my Tweet of this photo and asked me to send them details. I haven’t heard anything back from them but hopefully they can send the driver a memo. 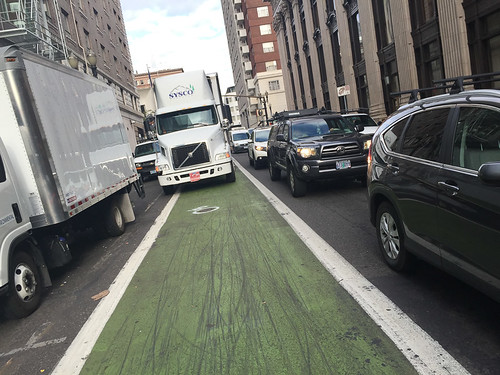 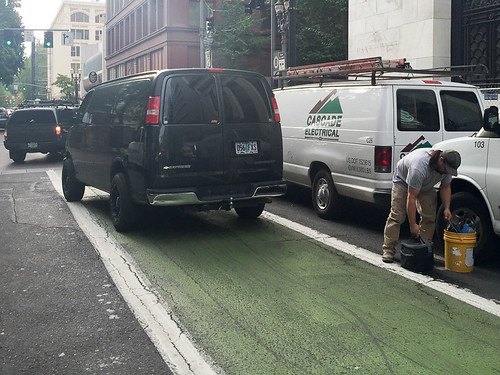 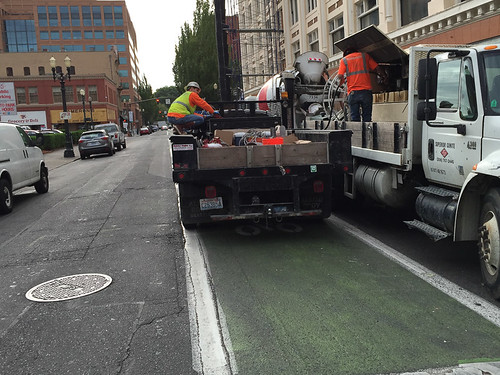 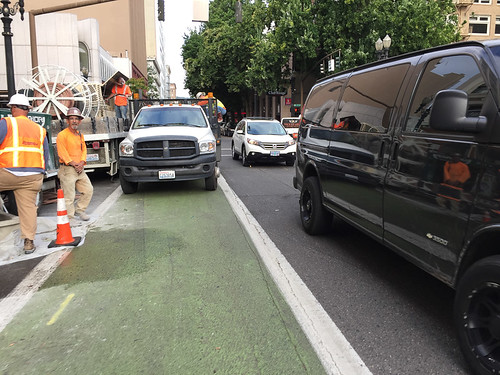 This situation is not new, nor is restricted to this area of the city. When I shared a photo of it on Twitter this morning I hear from people who say this is a very common problem in the Pearl District.

Don Arambula, a principal at architecture and urban planning firm Crandall-Arambula, said my photo is, “Exhibit A of why buffered bike lanes are a complete bust.”

I imagine these guys park like this for a variety of reasons: a general lack of awareness about the law or that it’s a bicycle-only lane, perhaps there’s a dash of disrespect for cycling, and maybe they’re just simply trying to do their job and have nowhere else to park. Maybe if we created larger loading/construction zones (even temporary ones if it’s an active work site), instead of always preserving as much on-street auto parking as possible, this problem wouldn’t be so acute.

Regardless of its causes, as we embark on the downtown bikeway project in the coming months you can bet this will become an issue of wider debate.

— Learn more on this topic from OregonBikeLaw.com.