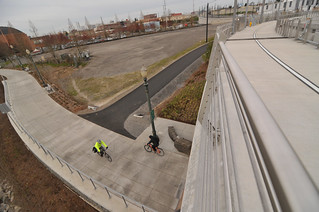 Next Wednesday (September 9th), just three days before the official opening of the Tilikum Crossing Bridge and the Portland-Milwaukie Light Rail Line, we’ll already be thinking about what comes next. And we’re not the only ones.

Portland’s elder statesman of transportation, Congressman Earl Blumenauer, told us in an interview back in December that he has made it his “personal mission” to get people to realize that after Tilikum there’s nothing in the federal pipeline. That marks the first time in over half a century that a major federal transportation project isn’t waiting to break ground.

This situation represents a major opportunity for the community to get educated and engaged about what should come next.

Last week we reported that high-level PBOT staffers are considering a federal TIGER grant for the Lloyd District that could add the much-needed infrastructural element to its already burgeoning development picture.

As we cast about for the “next big thing” we need as many smart people as possible in the conversation. Eventually PBOT, Metro, and other regional agencies will rally around a list of potential projects that will define our politics and funding debates in the near future. We want to influence that list, and that’s where Wonk Night comes in.

Wonk Night is a casual and candid conversation where we bring together experts in the field, planners, engineers, city staffers, activists, and interested transportation geeks of all stripes. Everyone’s welcome! We’ll supply the drinks and snacks and the only thing we require in return is an open mind and willingness to have a productive dialogue.

Once again we’ve teamed up with Lancaster Engineering for this event. They’ll host us in the lobby of their downtown office. Doors open at 6:00 and we’ll get down to business around 6:30. Hope to see you there.

– Learn more about Wonk Night and read recaps of past events here.

The post Join Us for Wonk Night and learn what’s next for Portland appeared first on BikePortland.org.