Next week, Portland will consider a contract to put 600 “smart bikes” like this one (from Orlando’s Juice system) on the street by next July at no cost to the city.
(Photo: City of Orlando)

First in a four-post series today about bike sharing in Portland.

Nine years after being one of the first U.S. cities to float the concept, the City of Portland plans to announce today that it’s finally ready to launch a public bike sharing system.

The key to the plan, which would be required to launch by July 2016: the city is planning to skip a generation of bike-sharing technology and launch a system that uses “smart bikes” with built-in GPS and self-locking mechanisms. The revised system would be 20 percent smaller but about 55 percent cheaper than the one the city originally planned.

A revised contract with Motivate Inc., formerly known as Alta Bicycle Share, is scheduled for review by Portland’s city council next Wednesday.

If approved, the deal will bring 600 45-pound “smart bikes” to the streets of central Portland by next summer — with or without a corporate sponsor.

For occasional users and tourists, the price to ride will be $2.50 for a ride of up to 30 minutes. Heavy users will be able to sign 12-month contracts at $10 to $15 per month to get a free daily allowance of 90 minutes.

Month-to-month memberships will be more expensive. Their exact price is yet to be determined.

The city says that if a corporate sponsor is not found, the system will probably lose money. But New York-based Motivate has agreed to eat any losses itself for the first three years — a shift in responsibility intended to light a fire under Motivate to recruit a sponsor. 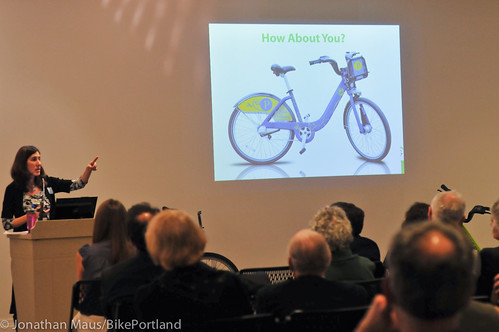 A “yes” vote from city council next week would advance a longtime goal of Portland biking advocates and fulfill one of city Transportation Director Leah Treat’s four major goals for 2015: to set a bike share launch date in 2016.

The point of a bike sharing system, the city says, is to let people decide to start biking midday without having to plan ahead.

City bike share project manager Steve Hoyt-McBeth said in an interview Friday that a bike share system will help the city crack a nut it’s been working on for many years: making it easy for more Portlanders to ease their way into bike transportation gradually rather than making it a major life decision.

“When you wake up in the morning on a work day, you decide whether you’re going to ride a bike for the rest of the day,” Hoyt-McBeth said. “You make that decision in the morning, at a time when you’re the most stressed, when you’re most pressed for time and when the weather is unlikely to be very nice.”

The point of a bike sharing system is to let people decide to start biking midday, without having to plan ahead.

“At any time during the day, no matter how you came to that bike share station, bike share is there to go to a meeting, back home or simply for a ride,” he said.

New plan is much revised from 2012 plan

The planned bike share system map. Bikes could be parked anywhere in this area for a small fee, or near the official docks for free.
(Image: City of Portland. Click here for full map.)

The bike sharing system being announced today is very different from the one the city anticipated in 2012, when it accepted a proposal from Motivate for a “smart dock” system that would have been modeled on Motivate’s successful one in Washington D.C.

Here are some of the many changes:

• Portland might launch bike sharing without a primary corporate sponsor. After years of delays related to unease among potential sponsors, the city has found a new solution: plan to launch with or without one, and aim to get one later on if possible. (This tactic was successfully used by Chicago, Treat’s previous employer, among other cities.)

• Motivate is shouldering the risk for the first three years. If a sponsor isn’t recruited to subsidize the system’s cost, the operating losses will go to Motivate. Unlike the old system, this gives the company a powerful incentive to recruit a sponsor.

If no sponsor is found or the expenses are higher than expected, Motivate’s commitment will expire in 2019 and Portland will be left with a better system than it can afford to operate.

Here’s the catch: the city’s bike share grant, which originated with the federal government, requires it to operate a system for at least five years. If no sponsor is found or the expenses are higher than expected, Motivate’s commitment will expire in 2019 and Portland will be left with a better system than it can afford to operate. If that happens, it’d have to scale the system down.

On the other hand, the system might turn out to operate profitably within a year or two, as Phoenix says its system will. If that happens, Motivate would pocket 60 percent of the proceeds for the first three years but the city would be in a strong position to get a slice of the profits starting in 2019.

City Active Transportation Manager Margi Bradway, a former insurance lawyer for Stoel Rives who has helped represent the city in its recent negotiations with Motivate, said Friday that this agreement — for Motivate to assume both the risk and most of the reward for a few years — was the key to resurrecting Portland bike share. Close-up of the locking system on a Social Bicycles bike at the University of Virginia. The city expects to let the bikes be locked for free anywhere on a city block that has an official dock; the bikes’ GPS can sense whether they’re close enough to the dock.

• The equipment will be much cheaper. In 2012, Motivate (then known as Alta Bicycle Share) nearly tanked. This was because it had signed an exclusive contract with Montreal-based firm PBSC, and the latest version of PBSC’s software turned out to be a lemon. Over the year that followed, bike share launches were delayed across the country. Portland’s was one.

Today’s proposal sweeps that away. For the first time, city staff said, Motivate has agreed to operate a new system — both hardware and software — that doesn’t come from PBSC.

Instead, the system will come from Social Bicycles, a young, fast-growing bike share company that provides equipment to the bike share systems in Phoenix, Santa Monica, Tampa, Topeka, Boise, Orlando, Ottawa, and Hamilton.

The smart-bike system’s 44 percent savings per bike is the main reason the city will be able to launch without a sponsor.

The key to Social Bicycles’ equipment: instead of using sophisticated computerized “smart docks” like the ones developed by PBSC and B-Cycle for cities like D.C., New York, Seattle, San Francisco, Denver and Minneapolis, its systems put the computer on the bicycle itself.

This approach turns out to be much cheaper, Hoyt-McBeth says. The city’s old plan was to spend $4.5 million for 750 bikes and 75 stations. Its new plan is to spend about $2 million for 600 bikes and 60 stations. That 44 percent savings per bike is the main reason the city will be able to launch without a sponsor. (We’ll explore this further in another post later this morning.)

• The stations will be less dense. The 60-station, eight-square-mile service area will be approximately the same as previously expected, running northwest to 24th Avenue, southwest to I-405 plus the South Waterfront, southeast to Powell and 12th and northeast to the Lloyd District, plus inner North/Northeast Portland between Interstate and MLK as far north as Killingsworth. But the stations themselves will be less densely packed than under the old system: every few blocks downtown, every more than a few blocks elsewhere.

• The local matching funds will come from the public after all. When Portland City Council agreed in 2011 to apply for a bike sharing grant, bike share was pitted against freight and sidewalk projects for scarce city dollars. At the time, Commissioner Dan Saltzman said he would support it only if the city didn’t provide any operating subsidy for the system. (His comments are on p. 39 of the minutes from that meeting.)

In a sense, nothing has changed; the city still isn’t planning to hand Motivate an operating subsidy for its system. But the city is planning (as it would have under the 2012 scenario) to continue assigning Hoyt-McBeth to be bike share’s half-time project manager, overseeing the contract on the city’s behalf. And because there’s no sponsor yet, the city is planning to designate about half of Hoyt-McBeth’s $86,000 salary (over the last three years and the next three) as the 10 percent “local match” required by the federal grant.

This is just a procedural change, not a reallocation of money. But it’s also an acknowledgment that yes, local taxpayers are, and already have been, spending something (about $40,000 a year) to have a public bike-sharing system.

On Wednesday, Saltzman policy manager Matt Grumm said PBOT’s time overseeing the contract isn’t a problem for the commissioner as long as the city doesn’t send money directly to Motivate.

“That’s not something Dan has brought up,” Grumm said. “For Motivate to operate it on their own with no city dollars going there is exactly what he wanted to see. … So far, what it looks, it looks pretty good to him.” If the council approves a contract next week — and based on this process so far, we’ll reserve judgment on how likely that is — it’ll be a big day for biking in Portland.

At that point, the question will become: will the system work?

Stay tuned. Still to come this morning, we’ve got three more posts that will analyze the factors that could make Portland bike sharing fly or flop.

Corrections 6:25 a.m.: A previous version of this post contained three errors. It said credit card readers will be built into the bikes; the bikes only receive PIN numbers after purchases have been made via web, mobile app or one of 11 wired stations. The post overstated the amount of profit that Motivate would take home; the company stands to get 60 percent of the upside, not all of it. Finally, it incorrectly suggested that Hoyt-McBeth had spoken with Commissioner Saltzman about the subsidy issue. He hasn’t.

The post Portland overhauls bike share plan, braces to launch with or without a sponsor appeared first on BikePortland.org.