It’s coming. Finally. But will it work?
(Renderings via City of Portland)

Third in a four-post series today about bike sharing in Portland.

Earlier today, we wrote about why Portland’s three-year bike share delay could accidentally make its system one of the smartest in the country.

Now, let’s look at the biggest ways the system could, if approved next week, totally fail. The New York-based startup Social Bicycles was founded in 2010 and received $1.3 million in angel funding in 2013, followed by undisclosed venture funding later that year.

How much money is SoBi making now that it’s scored contracts in Phoenix, Santa Monica, Tampa, Topeka, Boise, Orlando, Ottawa, and Hamilton? The public doesn’t know. But if SoBi’s growth slows, it runs out of cash and it shuts down, then Portland and its operator, Motivate, could be left with a bunch of obsolete equipment and unsupported software.

With all those systems up and running, it’s likely that someone would swoop in to buy the company’s assets, as a pair of New York City companies did when Motivate was struggling last year. But there’s no guarantee.

City staff make a strong case that a wandering fleet of “smart bikes” is best for Portland. But why didn’t they go with Nextbike, a firm with similar technology that’s already well-established in Europe?

“It was really important to us that we rode the bike and felt the bike,” said Bradway, who said she and her husband own 20 bikes between them. “People from the mayor’s staff, Commissioner Novick’s staff, our staff, all rode the bikes. … They’re the best of what’s available for bike share. Are they carbon racers? No. But they ride really well, they handle really well, and they’ve got the smart-bike technology.”

For what it’s worth, I too rode a SoBi bike earlier this year, and I agree. They’re noticeably better to ride than the ones in most U.S. cities.

Bradway called SoBi “a pretty small but fairly successful company” and said that Motivate did a 100-page report “on the whole chain and production line” used by SoBi, to make sure it wouldn’t repeat Motivate’s previous supply-chain problems.

“If Sobi totally goes away, obviously we would start the process again and do a new purchase order,” Hoyt-McBeth said. “In the end of the day, it’s just like if anything else breaks, what do you do? There’s your legal remedies and then there are some practical considerations. … We feel good about the SoBi product and we feel good about their growth and where they’re going.”

2) Motivate could be incompetent

Portland’s chosen operator doesn’t inspire huge confidence; it nearly collapsed last year, after all, due largely to its bad deal with its struggling supplier in Montreal. Just before those troubles hit, a few of the staffers who built it jumped ship to form their own company. Though the firm bought into an existing SoBi system in Providence last year, this is the first time it’s agreed to operate largely unfamiliar equipment.

Why do Portland staffers think the company has turned a corner? Mostly because the team that bought Motivate last year has things its previous owners didn’t.

One is a CEO with a golden resume in transit operations: Jay Walder, former head of the subway systems in New York, London and Hong Kong. Motivate’s previous bosses, the founders of Portland-based Alta Planning + Design, were gifted … planners and designers.

The other is deep pockets. Motivate’s new owners are Related Partners, a New York real estate firm, and Equinox, a high-end chain of gyms.

Within months of the company’s sale, Motivate swapped out its faulty software and announced a 100-station expansion in New York and a tenfold expansion in San Francisco Bay. If they’re incompetent, they’ve got a lot of people fooled.

No company might decide Portland’s system is worth their while.

“It’s a lot easier to sell something people can see on the ground as opposed to selling pixie dust,” Hoyt-McBeth said.

Motivate, he says, has sophisticated connections and dedicated sales staff. And maybe most importantly, the private operator stands to lose hundreds of thousands of dollars over the next three years if it doesn’t find a sponsor. The city thinks this will force the company to prioritize the task.

Though some U.S. cities have signed sponsors before they launch, others have landed them after, or in the immediate lead-up.

“Almost every city with a bike share system of our size has secured a title sponsor or a family of large sponsors in the first year,” Hoyt-McBeth wrote Wednesday.

4) Portland might not have enough good bike infrastructure downtown 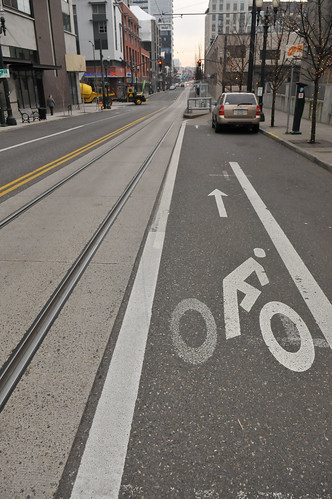 NW Lovejoy and 13th in 2011. (The bike symbol
has since been removed.)
(Photo: J.Maus/BikePortland)

SoBi’s bikes are nice compared to other bike-share bikes, but no bike that big would be comfortable for a beginner to ride in a door-zone lane like the one on upper Southwest Broadway.

From DC to Minneapolis to Seattle to Pittsburgh, cities launching bike share have accompanied their systems with buffered or protected bike lanes near the core of their service area, to make it not just possible but comfortable to ride a bike. Portland’s central city has terrific transit and walking, but probably the sparsest downtown bike infrastructure of any comparable American bike city. (It’s working on this on multiple fronts, but it’s not there yet.)

As BikePortland reader Maccoinnich observed this morning, the bike infrastructure in the Pearl and inner Northwest — probably the densest residential area included in this system and home to the most low-income residents — is even worse.

There are many who argue, not unreasonably, that with such great walking and transit already, downtown shouldn’t be the first neighborhood to get great bike infrastructure too. But the truth is that to work as a business, Portland bike share will need to be focused downtown. The rest of the city just isn’t dense enough yet.

Maybe you think Portland bike share should make decisions based on the public good rather than business viability. In that case you’d better get behind a public subsidy for it. The plan the city announced today perfectly illustrates the limits of what a system can do with almost zero local tax dollars.

— Learn more about today’s big announcement here. And stay tuned for the final part of today’s series, when we’ll look into how PBOT is handling bike share competition from a private company in their own backyard.