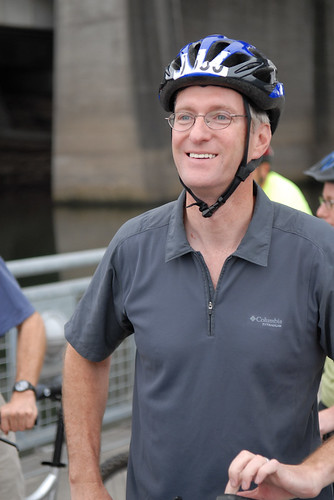 Wheeler at a 2009 ride during the
Safe Routes to School National Conference.
(Photo: J. Maus/BikePortland)

The race is on.

Today Ted Wheeler announced that he wants to unseat Charlie Hales as mayor of Portland.

If Wheeler’s name sounds familiar it’s because he’s the former Chair of Multnomah County and is just coming off a stint as Oregon State Treasurer, a position he assumed in March 2010.

“I know a gas tax is unpopular; but right now that’s probably my first choice.”
— Ted Wheeler on how he’d fund streets

At his announcement event in southeast Portland this morning, Wheeler made it clear he intends to run to the left of Hales. “I’m running because I believe we can’t call ourselves a progressive city unless we’re making real progress for those who need our help the most.”

After being introduced by Oregon State Rep. Lew Frederick, the 53-year-old Wheeler gave a very sharp and high-energy speech and then answered questions from the media. Wheeler laid out a classic progressive agenda mentioning how he’d fight for taxpayers, low-wage earners, older adults, and so on. He also spoke a lot about the hottest political topic in town right now: homelessness.

“Do we want more promises on helping the homeless, or do we want progress?!” he asked. And later he added, “Let’s be honest with ourselves, we have a crisis on the streets of our community.”

When it comes to transporting ourselves on those streets, Wheeler’s event had much more on the topic than I expected. He mentioned “progress on fixing roads” as one of his top priorities. He mentioned that he wanted to make developers “pay their fair share of the costs of roads,” and he wasted no time in bringing up that perennial populist political football: potholes.

“I believe we can rebuild our roads, improve street safety, and finally do what has dogged so many administrations… How about this? Let’s fill those potholes!”

As Chair of Multnomah County Wheeler has real-world experience with transportation funding policies. He also, very notably, was one of the few elected officials who had the guts to question the Columbia River Crossing project.

When Wheeler concluded his speech today, the first question he got asked was about transportation funding. “How will you pay for streets?” someone asked.

After rattling off a few statistics for context (and to show he’s done his homework), Wheeler said, “We cannot wait for Salem to pass a transportation package.” Then he stole a line from the Hales administration by adding that, “We can’t go to our taxpayers and ask for additional revenue when we haven’t built trust with those same taxpayers.” That’s a concept Hales has been operating under since he took over and it’s why his “Back to basics” message has resonated with so many people. For Hales, the “we must build trust first” concept always felt (to me at least) like a back-handed way of insulting former Mayor Sam Adams’ transportation policies.

While Hales has made ground in building trust with some voters by focusing on paving and maintenance, the fact that he and Commissioner Steve Novick have failed to pass any new funding for the work is something Wheeler plans to use against him at every opportunity.

Wheeler said City Hall needs to “apologize for not being good stewards of the basic infrastructure of this city.” He then promised that any new funding policies would go before voters.

“I think the mayor made a mistake when he ruled out one and then two and then three and four and five different [transportation funding] ideas and said right up front that the public won’t get to vote on this.

“What does that say,” he continued, “About the city’s view of the public it works for and represents?”

Then he offered a specific proposal: raise the gas tax. That idea was dismissed by Commissioner Novick and Mayor Hales before the public process for their street fee even began because it “didn’t poll well”.

Despite its unpopularity, Wheeler thinks it’s the best option. Here’s more from his answer today:

“I say keep it simple. I know a gas tax is unpopular; but right now that’s probably my first choice and I’ll tell you why: Prices for gasoline are falling and they’re expected to remain low; people understand what a gas tax is and they know how it works; and it spreads the cost of roads over a relatively wide population. So that’s where I’d start.”

In terms of his bicycling credentials, Wheeler has plenty. When asked for a comment today he offered this general statement:

“As an avid cyclist, I don’t distinguish between riding for recreation and riding for transportation.Everyone on a bicycle, no matter the goal, deserves safe roads and good routes. As Mayor, I’ll make sure the daily experience of cyclists lives up to our image as a bike-friendly city.”

How “avid” is he? Wheeler has completed an Ironman triathlon and he’s no stranger to riding around town.

Wheeler has also shown that his talk of working with the community isn’t just speech fluff. On two past occasions he’s left comments on BikePortland while in his position as Multnomah County Chair.

In March of 2010 he weighed in on the studded tire debate:

I agree with those who say that metal studded tires do substantial damage to the roads. I’d love to see an estimate from ODOT. I believe that this is best addressed at the state level rather than with a patchwork of local ordinances that vary from jurisdiction to jurisdiction. We have family in Central Oregon so we go there a lot in all conditions without trouble. We don’t use metal studs – they are no longer necessary as there are lots of good alternatives now that don’t gouge the roads so badly.

In April 2009 he left a comment assuring us that the county would continue to have a bike advisory committee:

As County Chair, I am currently working with the Department to find an alternative solution. There is no support among Board members to suspend the work of this committee, and we will find a way to staff its efforts going forward. Ted Wheeler

And tomorrow, I can now share that Wheeler will meet with a roundtable of professional bicycle advocates, volunteer activists, and other insiders. The meeting was put together several weeks ago to help him learn the current state of cycling in Portland and get a better feel for the issue.

I’ll be at that meeting. Stay tuned for a recap.

The post A challenger to Charlie Hales wheels into mayoral race appeared first on BikePortland.org.