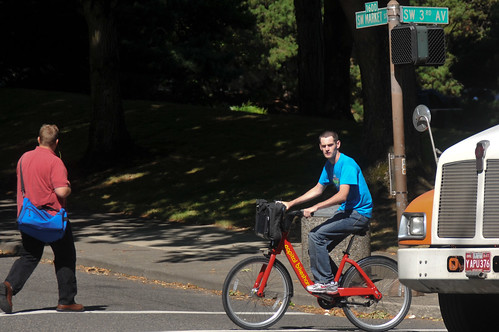 In the last two days, we’ve reported in detail about the new bike-sharing system that Portland finally seems poised to secure next week.

All of these operational details have prompted a lot of discussion around a simple, fundamental question that everybody (including me, when I started reporting on bike sharing four years ago) tends to struggle with. What exactly is the point of bike sharing?

The charts below should help a lot.

This is from a 2011 survey of people who purchased memberships in the Twin Cities’ Nice Ride system. I’ve annotated it with my interpretations, but there’s a lot to see here; feel free to add your own notes in the comments.

If you’d like to learn more, this report includes analysis of this survey and a wealth of other bike-sharing studies.

It gets people who rarely rode bikes to use them more often. It’s mostly useful for trips other than commutes. It replaces trips of many other modes. It combines with trips of many other modes. Its most significant effect is to make public transit better, more useful and more attractive.

What is the main annoyance of getting downtown by public transit? It’s the fact that you can’t quickly get around downtown after it drops you off.

This isn’t the only use of bike sharing, of course. But it’s the single most important problem that bike sharing helps solve, and surveys show it. A minority of people ride public transit less after they become bike-share members. This is probably the people who live within the service area; a monthly or annual bike share membership usually costs about one-tenth to one-fifth as much as a transit pass. There seems to be a typo in the category listing here; the question refers to taxis, not buses. The notion that a bike share system isn’t really for current bike users is hard for a lot of people (me included) to get their heads around. Actually, a lot of bike infrastructure works the same way. It’s not a handout to bike users; it’s a handout to people who aren’t using bikes yet.

The nice thing about that is that when more people start using bikes (or public transit, for that matter), every single one of us wins.

The post What’s the point of bike share? This survey explains it well appeared first on BikePortland.org.