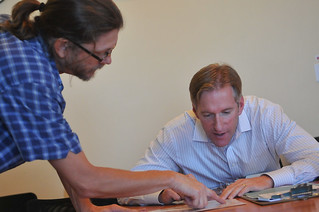 Wheeler took a very close look at an idea for an expansive
network of neighborhood greenways in southeast Portland
that was introduced to him by volunteer activist
Terry Dublinski-Milton.
(Photo © J. Maus/BikePortland)

If you have aspirations to be mayor of Portland, you must know your way around cycling issues.

That fact was cemented yesterday when mayoral candidate Ted Wheeler sat down for a meeting with cycling advocates just one day after he officially announced his campaign. The meeting was organized by his staff several weeks ago as a simple informational session to help the current State Treasurer bone-up on bicycling.

Here’s who Wheeler met with for just over an hour at the central eastside office building of Alta Planning + Design: (Disclaimer: Alta offered to host. Wheeler’s staff asked me who should attend and I gave them a list): Terry Dublinski-Milton from SE Uplift and BikeLoudPDX; Alta Planning’s CEO Mia Birk; Ian Stude, Director, Transportation and Parking Services at Portland State University; and yours truly. (Others invited to the meeting but who were unable to attend were: Alta Planning Principal and Program Specialist Jessica Roberts; Carl Larson from the Bicycle Transportation Alliance; founder of Rosewood Bikes Matt Martin; and citizen activist Lizbon Grav.)

“I want to hear what people are thinking and what you expect from the next mayor of Portland.”
— Ted Wheeler

Wheeler made it clear from the outset that he was flexible about the format, but his intention was to learn and ask questions. “I’m not coming here in the spirit of, I know it all and here’s my plan for bicycles,” he said. “I’m not in a position to be telling people how it is in their particular space… I want to hear what people are thinking and what you expect from the next mayor of Portland.”

We spent much of the time talking about the Bureau of Transportation’s neighborhood greenways program. Dublinski-Milton, one of the most dedicated and knowledgeable volunteer advocates I’ve ever met, started things off by sharing his vision for “Southeast in Motion” a network of low-stress residential streets in southeast Portland. He’s modeling his work on previous neighborhood planning efforts that PBOT has adopted like Southwest in Motion and East Portland in Motion.

Wheeler was very intrigued by Dublinksi-Milton’s concept and impressed by the work he’s put into it (we all were) — so much so that he gave Dublinski-Milton his personal email address to follow up. After taking a close look at maps and other documents related to the plan, Wheeler asked us his first question: “What can you tell me about the cost of these greenways?”

“What do you think is the best opportunity and what is your biggest fear?”
— Ted Wheeler

At that point Mia Birk gave him some background on what they were and some cost estimates for how much they cost. Once he got a better picture of neighborhood greenways in his head, he said, half-jokingly, “So, we get a High Line on street level?” Wheeler was referring to the High Line linear park that winds its way through Manhattan on what used to be an elevated subway line.

The conversation then shifted toward the key challenge for neighborhood greenways: diversion. Wheeler was a quick study on the topic and seemed to immediately grasp the neighborhood dynamics and politics around this issue. He actually said it was similar to his work on the Columbia River Crossing (but on a much different scale) when he crunched numbers on capacity of the highway expansion and its potential impact to nearby neighborhoods and other freeways.

Ian Stude from PSU then pointed out to Wheeler that, while greenways are great, they are just a small step towards what’s needed to achieve our biking goals. To really move the needle, Stude said, we need protected bikeways on major streets.

A conversation about the benefits, tradeoffs, local history, and politics of physically protected bikeways ensued.

“Where would be your top locations for these?” Wheeler asked. And without skipping a beat, Dublinksi-Milton, who was standing at this point and speaking in his usually passionate and demonstrative way, said, “Burnside. Barbur. 122nd.” Stude threw in Broadway for good measure.

With all these big ideas on the table, the rest of the meeting was spent sharing our various perspectives on why Portland hasn’t moved forward on major protected bikeway projects at the rate of other cities. We talked about a lot of reasons: funding constraints and the need for a new local revenue source; the bad bike politics that have plagued Portland since the scandal that nearly brought down former Mayor (and biking champion) Sam Adams in 2008; the unfortunately large influence wielded against City Hall (and PBOT) by the Portland Business Alliance and other groups; a local media that’s often hell-bent on sensational and controversial coverage when it comes to bicycle projects and policies; and so on.

Bicycling is such a positive for the city, there’s absolutely no reason it should be controversial. Or expensive. To make a point about funding, I asked Wheeler if he’d ever been to Sunday Parkways. “What’s that?” he asked. I explained all the amazing benefits Sunday Parkways has brought to our city and pointed out that it does so at a very small cost. We have so much road real estate right now, I shared, we just choose to let it be used primarily for driving. There are many low-cost steps we could take to re-allocate space and create the physically separated conditions to many Portlanders — on both sides of the windshield — crave.

Toward the end of the meeting Wheeler asked us all to answer one final question: “What do you think is the best opportunity and what is your biggest fear?”

We answered the first part by sharing our hopes for stronger political leadership around active transportation (that was a major theme the entire meeting) and a future that includes a network of protected bikeways.

In terms of our biggest fears, the funding problem came up again; but I think the most powerful answer was summed up in three words: business as usual.