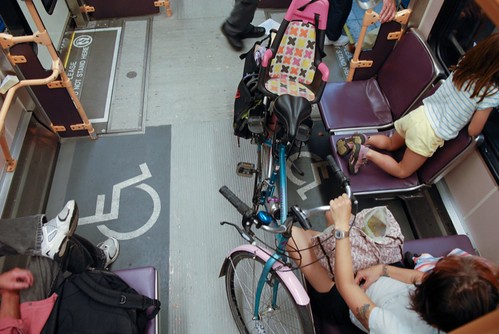 How can we make it easier and more efficient to take bikes on transit vehicles? TriMet’s Bike Plan is our chance to weigh in on that and other issues.
(Photo © J. Maus/BikePortland)

With the opening of the new Orange Line giving TriMet railcars and buses even larger footprint in our region, there’s never been a more important time for the agency improve access for bicycles. Making sure that bikes integrate well with transit stops, parking options and on transit vehicles themselves is crucial to Portland’s low-car future.

This morning TriMet announced four open houses aimed at getting your input on how to make their first-ever Bike Plan as good as it can be. They want to know: “What’s most important to you when it comes to bikes and transit?”

Here’s when and where you can tell them your answer:

Funds for this plan come from the State of Oregon’s transportation and growth management program. As we reported a year ago, the $108,000 grant will allow TriMet to do what they called a “pretty major” review of how its system interacts with bicycling.

Jeff Owen, TriMet’s active transportation planner, said he hopes bicycle riders can give the agency some expertise. “We can’t think of everything ourselves, and outside ideas are really beneficial and powerful,” Owen shared with us last year. “A lot of it might be things that we’re aware of, of course, but they could really bring some new ideas and creative thinking into it.”

If you want to help TriMet create a solid roadmap for future bike policies and bike-related investments, please consider getting involved with this plan. You can learn more about it at TriMet.org and stay tuned for more coverage and opportunities to offer feedback.

If you can’t make it to one of these open houses, TriMet is also accepting written feedback via bikes@trimet.org through October 31st.

(Note: In related news, we’ve just received an update from TriMet about their proposal to install swing gates on crossings of the new Orange Line in inner southeast. We will share more about that as soon as we can.)