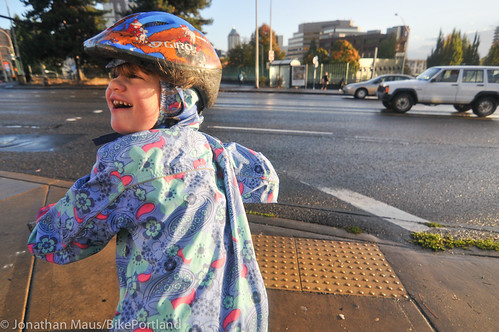 Well, we sort of hate to give this recognition to the same person twice — let alone twice in a row. But amid all the amazingly insightful comments beneath Jonathan’s piece Wednesday about coming to terms with Portland’s big changes, one stood out as both accepting of Portland’s serious problems and focused on its enduring strengths.

It came from reader GutterBunnyBikes, who wrote, Thursday evening, about our city’s consistent ability to be “an active agent in its own evolution.”

Honestly, I think much of the “petals have fallen off the rose” comments really might say more about where you are from than where you are.

For me, I moved here in 92 from Detroit. Part of what I loved about this town was the UGB and the fact the city had a plan to keep the urban decay and blight at bay because the city has to reinvent itself.

It seems the ones that bemoan the recent changes most are those that are born/raised here, or are from some pretty great cities to begin with. LA, NYC, Boston…. I love them all (honestly if I could afford it, I’d gladly head out to NYC), but prefer it here for various reasons.

But if you come from Buffalo, Pittsburgh, Detroit, Cleveland, Cincinnati, St. Louis, KC, Atlanta – even Chicago you’ve seen what becomes of cities that sit by and let the builders build out, what happens to the Downtowns when left to basically rot. And despite the recent “hype” of some of these cities, they really haven’t changed much over the years. Yeah, Detroit is becoming a bike town, but it’s largely because there simply isn’t any cars on the streets…and the lack of cars there are not for all the right reasons, but because of the worse possible reasons for a city.

And that is what Portland has always been for me, a city that is an active agent in its own evolution. A city not afraid to pick up and reinvent entire neighborhoods and communities if needed. And it’s has always been largely spearheaded by the young talent that migrates here – the locals here have always been weary of strangers.

Sellwood, Pearl, NW, Alberta, Mississippi were all “gentrified”- before that even was Hawthorne. And most the people that live there now, wouldn’t have cringed at even the thought to drive (with the car doors locked) through them “back in the day”. I had friends (young liberal art school friends) that refused to visit my house because I lived on 7th and Sumner back in the early 90’s. That same time I had a friend that rented the apartment on the second floor of the old drug store on Mississippi and Shaver, and for entertainment we’d buy a half rack of Henry’s and watch “Cops” out her window (did the same thing in Detroit, but it was 40s of Stroh’s on the front porch of downtown brownstones).

But Portland is the city of change, and doesn’t let the rust settle in. Be it city planning, public transit or bicycles, Portland has been at the top of the heap, leading the rest of the country by the nose on how to do it. Some may eventually surpass us at “it”, but it was often Portland that showed them the way. And our example, has helped make great cities even greater, and even helped some crappy ones become less crappy.

To quote another of the numerous smart comments on that post, from reader Alex: “You have to keep your spirit of the city alive, because no one else is going to for you.” Here’s to that. See you next week.

The post Comment of the Week: Portland, the city that can reinvent itself appeared first on BikePortland.org.