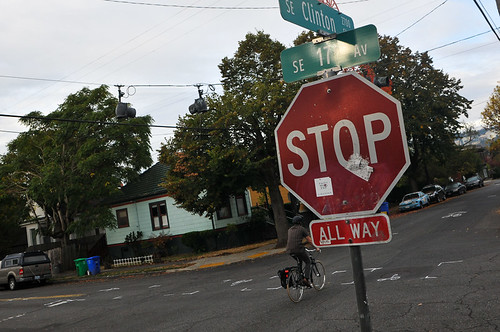 Outlines for future diverter at Clinton and 17th are on the ground.
(Photos © J. Maus/BikePortland)

Change is finally coming to Southeast Clinton Street, and so are the heated emotions that often follow.

As we reported late last month, after years of community outcry and detailed analysis of traffic patterns by city engineers, the Bureau of Transportation plans to install two diverters on Clinton in order to discourage people from driving on the “bike priority” street. The diverters will be installed on a six-month trial basis.

The buzz about the diverters has ratcheted up in the past 24 hours since PBOT has stenciled the outline of the one at 17th and Clinton.

And that buzz isn’t all excitement.

With a meeting set for Monday night (10/12) at the Richmond Neighborhood Association, some local residents have taken to Nextdoor.com to voice their opposition. A volunteer with Bike Loud PDX, the upstart activist group that in many ways is responsible for making the diverters a reality, posted some of the Nextdoor messages to Facebook last night.

“I hope this is only a rumor,” one of them reads, “as I need access with my work vehicle to my home of 23 years. Blocking vehicle traffic is a knee jerk reaction to a difficult traffic situation created by the City of Portland.” Bike Loud PDX says these postings are part of “an organized resistance” and is encouraging everyone who lives in the neighborhood to attend the meeting.

At the same time, PBOT is moving forward with the temporary diverters. We rolled over there this morning to take a look. The new diverter runs north-south across SE 17th. It will prevent people from driving east-west on Clinton at the intersection, while people on bikes will be able to easily bike through. 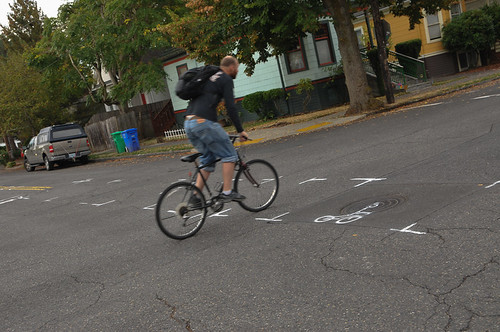 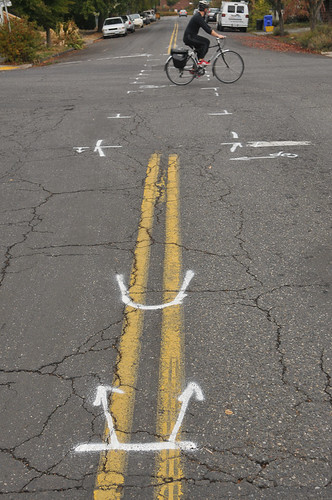 PBOT has determined that these diverters are necessary to maintain acceptable motor vehicle traffic volumes and a safe bicycling environment on this neighborhood street. They’ll have a big opportunity to make that case at the meeting on Monday.