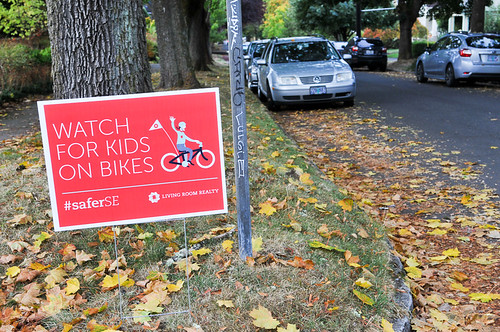 A Portland real estate firm is handing out free signs that encourage people to ‘Watch for Kids on Bikes.’

I spotted one of the signs this morning on SE 20th just south of Hawthorne and called Living Room Realty to learn more.

According to Living Room’s Agent Services Manager Sarah McBee the signs were inspired by other signs in the neighborhood. Jenelle Isaacson, the owner of the 70-agent company that has two local offices (and two more on the way), lives in the area and spotted a similar sign while on a walk about a month ago.

“She [Jenelle] saw this sign and it was hand-written. She just loved the message and said, ‘Let’s help this mom or dad get the message out’.”

I just so happened to see what I think is the sign that inspired this one a few minutes later over on Clinton at 17th. 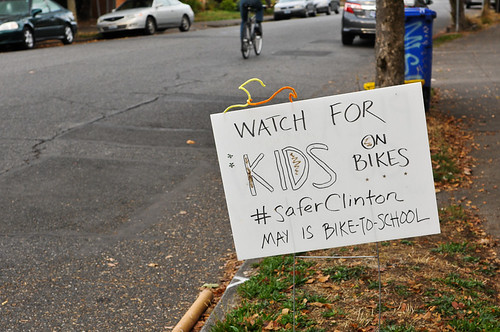 Now anyone can walk into the Living Room Realty office at NE 14th and Alberta or SE 26th and Clinton and pick up one of the signs for free. McBee said agents are also passing them out to their clients and putting them up in their own neighborhoods.

Isaacson, the owner of the company, has a special interest in safe streets because she regularly bikes with her 7 and 6-year-old daughters. McBee said the company also participates in the BTA’s Bike Commute Challenge.

While it’s disappointing that people feel they have to put up DIY signs to tame traffic on their neighborhood streets, it’s encouraging to see a local business get on board. Who knows, maybe these will become as popular as the “Drive like your kids live here” signs we see popping up all over the place.