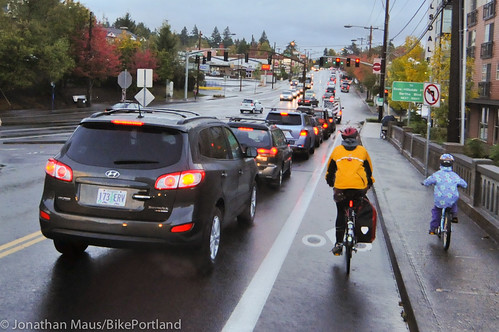 By a scan of headlines and social media feeds, last week’s International Walk and Bike to School Day was a big success. But the full picture reveals a more sobering truth: The vast majority of kids didn’t walk or bike to school.

This morning, Our Healthy Streets, the coalition behind the “For Every Kid” campaign, an initiative that aims to offer safe routes to school funding and programs to every student in the metro area, released a statement highlighting the many schools who didn’t participate.

According to the coalition, 115 schools in 12 cities across the Metro region took part in the event, but over 300 schools could not participate.

“It was so much fun to see these little bright people, so earnest and excited walking and riding to their school,” said Milwaukie Mayor Mark Gamba in the statement. “The sad thing was the long, long line of cars waiting to drop their kids off and the little ones that really wished they could have walked but their mom thinks it’s too dangerous. She’s probably not wrong.”

The same goes for Tigard says Woodward Elementary parent Eric Reynolds: “Many families did not participate in Walk and Bike to School Day because of dangerous intersections caused by inattentive driving. There are also gaps in the sidewalks with no shoulder to walk in and you are forced into the road with speeding traffic.”

As we reported last week, this coalition (which includes the Bicycle Transportation Alliance, the American Heart Association, the Community Alliance of Tenants, Oregon Walks, Upstream Public Health, and others) has the support of many state legislators. Together they’re ramping up pressure on Metro to commit more dollars to safe routes programs.

The post Safe routes coalition: Too many kids unable to join Walk and Bike to School Day appeared first on BikePortland.org.