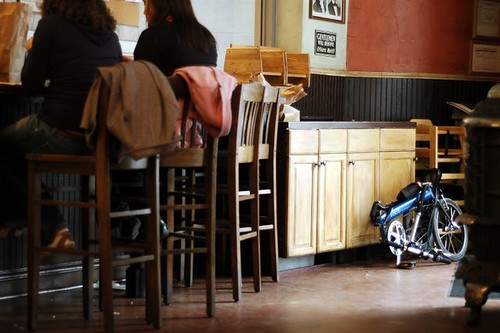 Want to beat bike thieves? What if you could take your bike with you wherever you go?
(Photos © J. Maus/BikePortland)

— This article was written by reader Ed Rae, a folding bike evangelist and senior sales rep for Brompton.


The unfolding crisis of bike theft

As the diverse range of Portland cyclists hear of or sadly come to experience directly the trials of bike theft, it’s gratifying to see many suggestions and solutions being offered. What seems clear is there’s no universal solution (that is, unless human nature changes and nobility wins out). 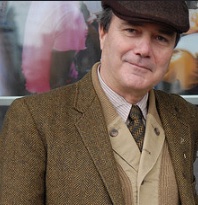 For some the solution might be centralized and supervised parking facilities at places like work and school campuses, transit hubs and public gathering points. For others, diffuse but secure parking scattered all across the city. Certainly better locks and smarter lock use would curtail thievery, and some of the emerging registration programs will discourage theft and aid recovery. BikePortland’s laudable efforts to involve and educate Portland police and increase their awareness and enforcement will also curtail thieving.

But there’s another piece in the matrix of solutions that’s embraced in much of the world yet less utilized here in North America:

I’m writing this because I’ve heard or read of too many bike theft episodes that are easily avoidable. It’s like watching someone walk into a wall over and over; eventually you feel you must show them the path leading around it.

How about owning a bike that rarely if ever needs even to be locked?

How about a bike that doesn’t need to be left outside anywhere, where even if not stolen is still subject to pilfering, vandalism and at the least, the degrading affects of weather (your lovely Brooks saddle isn’t just a target for savvy thieves but also doesn’t like baking sun or drenching rain… nor do the tires, cables, lube, paint and the rest)?

So what kind of fantasy is this; a perfectly ridable bike that never needs locking but can be taken anywhere? Have I been celebrating Oregon’s recent legalization of weed? Nope, the answer is folding bikes.

In the interest of full disclosure I work for a folding bike maker, but will state with certainty this could be written by anyone who owns one and who has nothing to gain other than the gratification of sharing a solution that’s simple, elegant and life-changing.

The right kind of folder will give up very little in rideability but be easily stashed under the table, desk, behind or under the counter, behind the door, next to the radiator in the corner, and so on. When in shops it can be towed along behind like a roller bag (doubling as a grocery cart). I’m taking some pains to describe scenarios because it might be easy to come up with reservations and caveats that in practice are more theoretical than real. 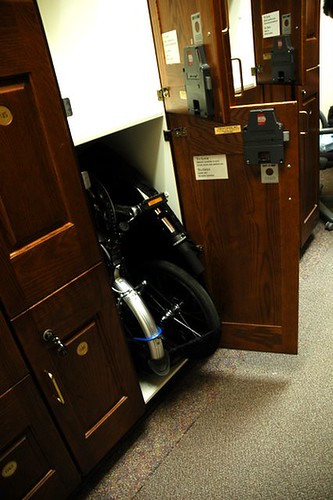 That one time I stashed my folder in a
locker at the Smithosian Museum in Washington D.C.

Go to the front of the movie theater and place it discreetly and almost imperceptibly under the screen. Return to seat with assurance that the entire audience is facing it and no one will walk off with your bike.

If one faces a snooty hotel concierge, cranky taxi driver or cloakroom attendant, zipping a cover that’s the size of rolled up pillowcase over the fold will assuage all concerns and also make the presence concealed/discreet if that’s the goal. If one is faced with catching a bus with the front rack already filled with rigid bikes or a MAX line that is “maxxed out”, not to worry; walk onboard with your little set-up and pick your seat.

I can think of many rides to restaurants or whatever with friends, and while they scout out a safe, secure, maybe weather-protected bike parking spot out there (sometimes at considerable distance from the establishment) I’ve folded my ride in seconds and carried or rolled it in behind me generally unnoticed or uncommented upon. By the time my friends enter (often with expressions of anxiety over where their bike has ended up somewhere on the dark street and whether it will be there when they return) I’m seated, with my first drink and with bike at my knee, under the table, in the corner of the booth, next to a potted plant, or what have you.

I’m writing this because I’ve heard or read of too many bike theft episodes that are easily avoidable. It’s like watching someone walk into a wall over and over; eventually you feel you must show them the path leading around it.

Though cyclists here in the states are often refreshingly non-conformist, many still can’t overcome very conventional and inaccurate stereotypes about folders, with their small wheels, and so on. But if you can get over it, a new world of experience awaits you, a hidden-in-plain-sight mode of use that will open up both the city and cycling in sometimes astonishing ways — and will almost guarantee you won’t become a bike theft victim.

There’s no assertion here that this solution is for everyone. Whatever you ride though, my hope is that you’re able to keep it there under you and not find it torn away forever by an unseen hand. See you out there… I’ll be waiting in the pub while you find a place to “safely” lock your bike.