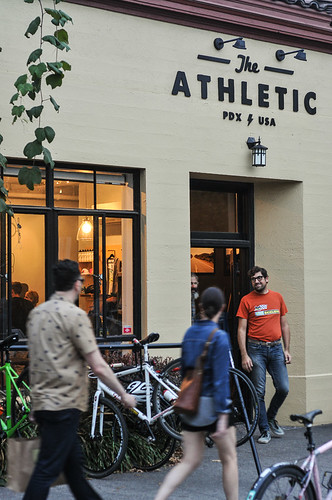 The Athletic celebrated one year of business at their
retail store located at NW 19th and Lovejoy.
(Photos © J. Maus/BikePortland)

As I looked into The Athletic’s retail store in northwest Portland on Friday night and saw it jam-packed with fans and customers, all I could think of was this: It all started with a pair of socks inspired by airport carpet.

Somehow, Jeremy Dunn and his partner (in life and business) Julie Krasniak, have managed to morph their love of bikes and design into a healthy and growing business with customers all over the globe. It’s hard to imagine until you set foot in their store. 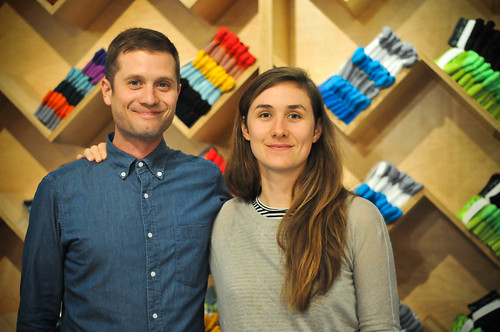 Jeremy Dunn and Julie Krasniak at a party celebrating their first year in business on Friday night.

Dunn, 34, founded Embrocation Cycling Journal in 2007 and most recently worked in marketing for apparel company Rapha Racing. Krasniak, 27, is a former professional road and mountain bike racer who most recently worked as a freelance writer for a French bike magazine. Together, they represent a powerful (literally, as they are both very fast riders) combination of creativity and entrepreneurialism.

“We had no idea people would be so crazy for it.”
— Julie Krasniak, owner of The Athletic

Two years ago they designed a pair cycling socks inspired by the Portland airport carpet. At the time, no one knew what a huge product licensing frenzy that carpet would inspire. The carpet was named Grand Marshal of the Starlight Parade, it made national news, and even has its own Wikipedia entry.

“We had no idea people would be so crazy for it,” Krasniak shared with me at their first anniversary party Friday night. As sales of the socks took off, so did The Athletic.

Today the company has a major online retail business with dozens of sock patterns. The collection now includes airport carpet-inspired designs from several major airports. The “Redrum” socks are based on the design of the carpet at Timberline Lodge where “The Shining” was filmed. There are also collaborations with various cycling teams and other designs that have nothing to do with carpets.

The name The Athletic is a nod to sport culture in general (it’s short for the athletic community). The company caters to runners and increasingly, to anyone generally interested in good design. The online store features apparel, rare magazines, and other “cool stuff“.

“The carpet socks,” Dunn says, “have afforded us the ability to do all the other fun stuff we wanted to do.”

Dunn was proud to show-off recently completed wall paintings by notable Portland-based illustrator Will Bryant. Back in February, The Athletic hosted the 1st Annual Blazers Basketball Show, an exhibition of rare memorabilia owned by the Blazers’ first coach Stu Inman. 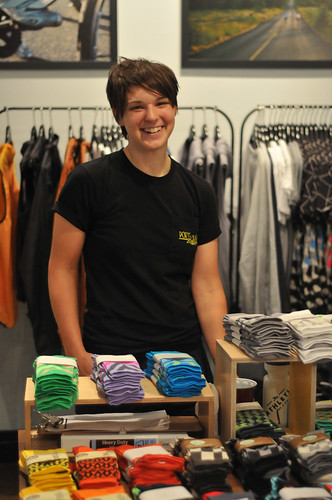 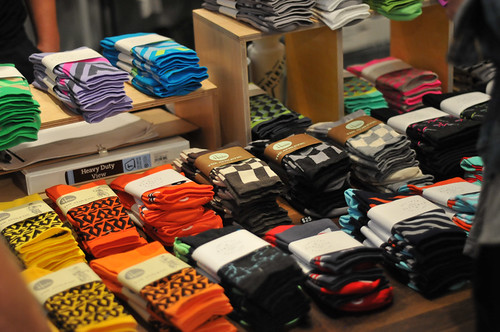 I think their socks are beautiful. They are also a bit longer than standard cycling socks. 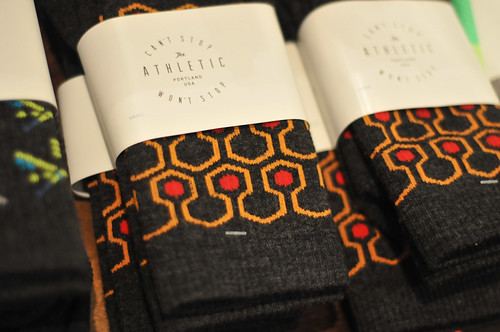 The Redrum design, based on the carpet in the hotel from the famous Kubrick film, “The Shining.” 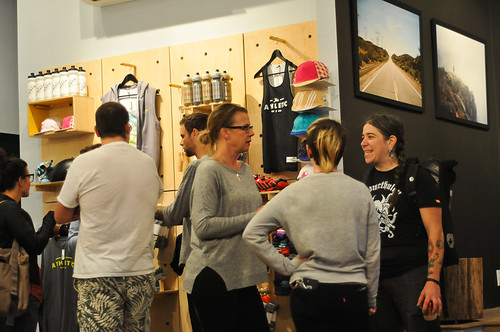 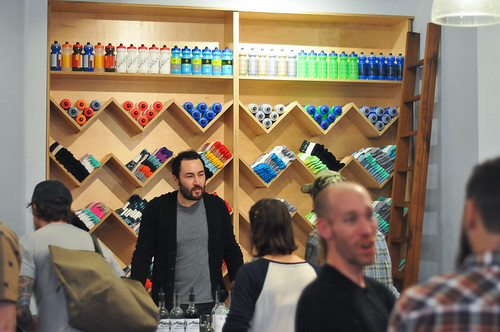 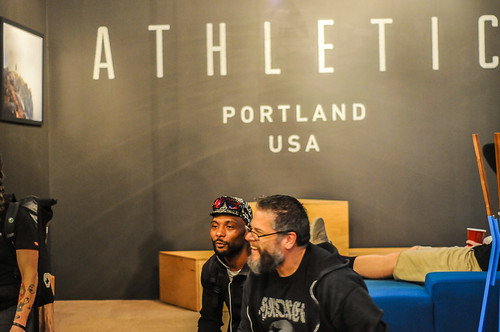 Their store, with its inviting ambience and couches near the front door that make you want to socialize or simply lounge around with one of their magazines, has become a showcase for designers and people who appreciate their work.

For Krasniak and Dunn, the business is about doing what they love and having fun. When asked what they’ve got planned for the next year, Krasniak look at me incredulously. “Next year? We only plan like a week or two in advance.” She was probably bluffing; but I believed her in spirit.

With Dunn and Krasniak at the helm, The Athletic has tapped into something way beyond cool socks, and they’re building a serious business. Dunn said they just opened up a wholesale program and bike shops around the country have responded in huge numbers. Their bold, geometric, and eye-catching designs have found a strong following and the industry has taken notice.

The Athletic employee Mary Lytle told me she spends her day shipping out socks all over the world. “Japan is probably our largest market,” she said.

Who would have thought? The success of The Athletic seems improbable on the surface; but the more you get to know Dunn and Krasniak, the more it seems like it was inevitable.

The post Much more than socks: The Athletic toasts one year in business appeared first on BikePortland.org.