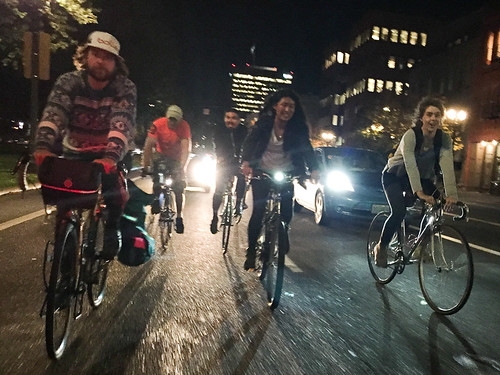 The spirit of a weekly mass bike ride is alive and well in Portland.
(Photos © J. Maus/BikePortland)

Portland has spawned a new weekly bike ride that has all the trappings of Critical Mass without the baggage of politics, activism, or controversy.

The Thursday Night Ride is all about camaraderie, freedom, and fun — all the things an urban bike ride should be. Last night I joined about 100 people who showed up at Salmon Street Fountain. I was happy to realize that I didn’t recognize anyone. There’s a whole new crop of Portlanders for whom this ride serves as a welcome mat into the city.

“It was my first mass bike ride,” said Mike Ingrassia, who stood out from the crowd with his white blazer. Ingrassia runs a bike-powered marketing firm and also organizes the Rush Hour Alleycat series. He first discovered this ride back in June during Pedalpalooza. “It’s a great way to meet friends as an adult,” he added. “You can go up to someone and be like, ‘Hey stranger, want to go get tacos?’ and it doesn’t seem weird.” 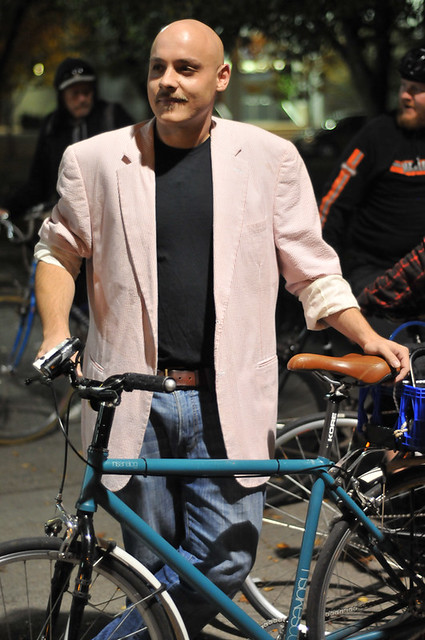 As I circled through the crowd looking to meet new friends myself, it was easy to strike up conversations. There were hugs as new people rolled up and I could tell by the first-name basis most people were on that this ride has already created its own community — but thankfully it’s a community that is open and welcoming to whoever rolls up. Even some random older dude with a notebook and a camera hanging around his neck. 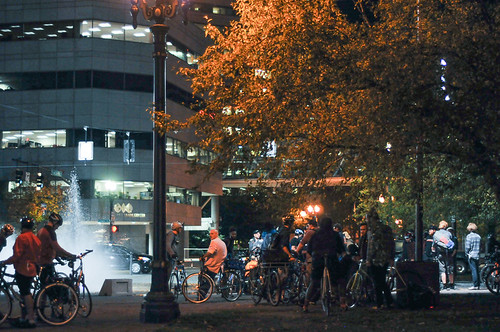 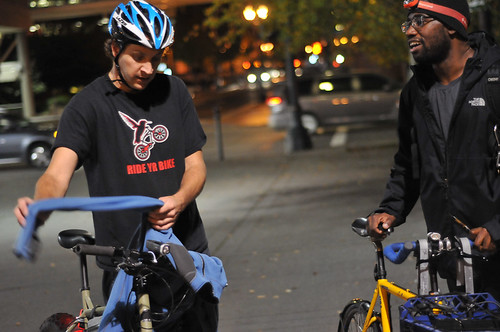 Nathan Jones, left, started the ride back in March drawing inspiration from similar rides in Guadalajara that have thousands of riders each week. His friend Cyrus Lynch (right) helped lead last night’s ride. 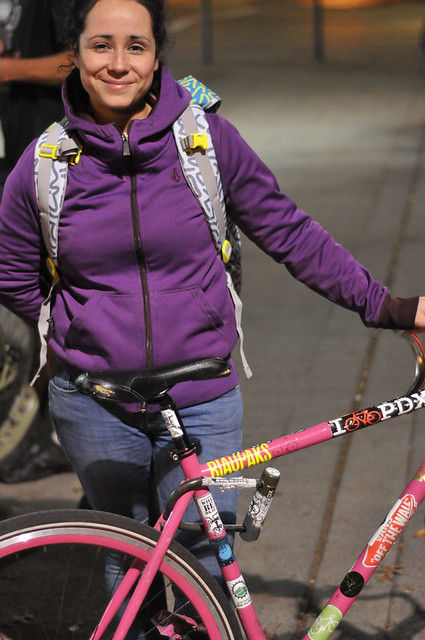 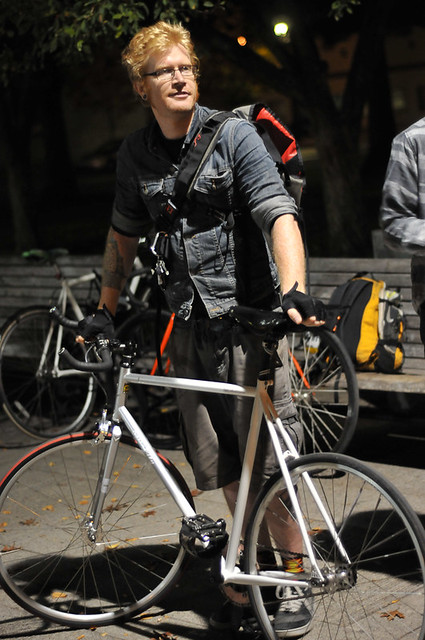 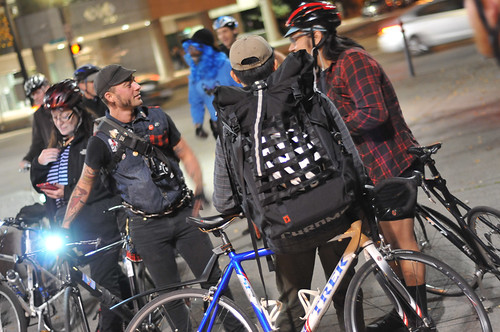 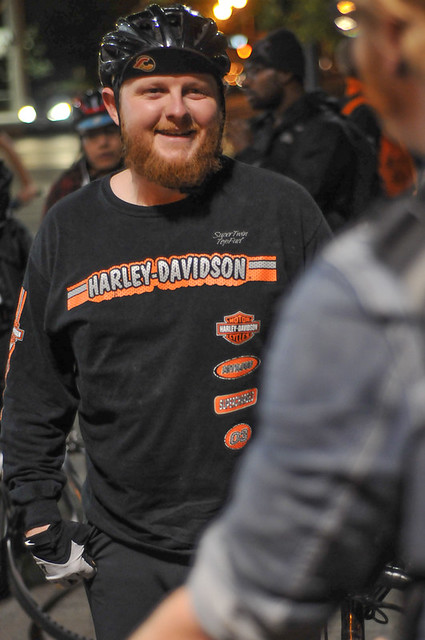 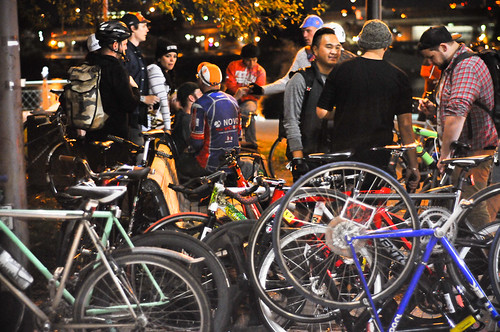 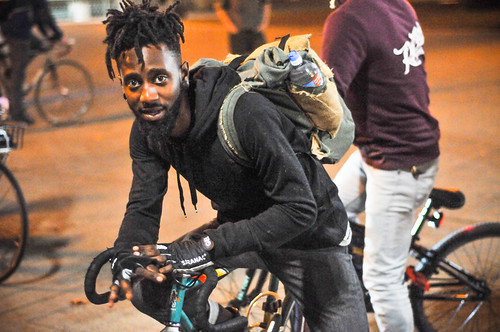 One important function of open, weekly rides like this is that they are perfect for people who are new in town and want to connect with other people who love riding bikes.

Josh Anderson moved to Portland from Bend a year-and-a-half ago. He told me he loves this ride because it’s “super diverse,” both in terms of people and bikes.

Josh Lucy moved here in April and he’s only been on a couple rides so far. He knew Portland was a place he could survive without a car, so he donated his to NPR before he moved here. “I love riding,” he said, as he showed me the interesting half-link chain on his Leader fixed-gear. “I’m just starting to get out and be social, so it’s cool to meet other people who love biking as well.”

After hanging out at Salmon Street Fountain for a while, we rolled out. The ride had a leader and sweep rider to keep everyone together (there had been some talk on the ride’s Facebook page during the week that people were going too fast at the front and it was leaving others behind).

We rode through downtown as a group with volunteers stepping up to “cork” intersections so that we could all stay together regardless of the signals. With 100 or so people, we easily took over any lane we wanted. We looped through downtown and then headed east on West Burnside, crossed the Willamette, then wound our way through the central eastside before heading down to southeast Portland before returning to the river via a thrilling ride down Hawthorne Boulevard to the Tilikum Bridge.

There was a guy on a unicycle dressed like a shepherd, a few longboarders who rode the entire way, two Dropout Bike Club members on freak bikes, and enough mobile sound systems to keep the music within earshot of everyone. 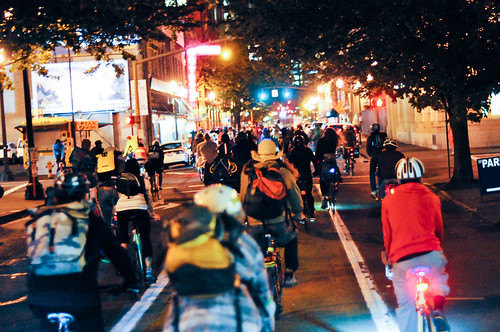 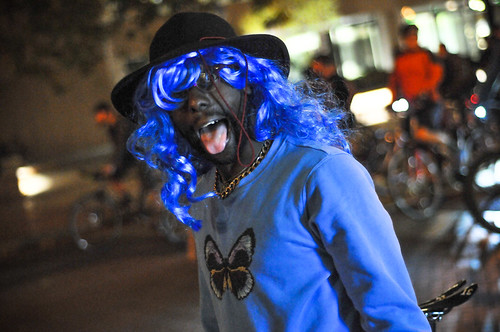 This is Royal, the bombastic protector of the ride who kept people safe by calling out oncoming cars and making sure everyone stayed in one lane. 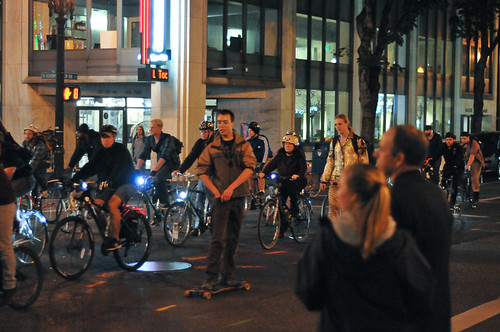 Skateboarders love these rides for the same reasons we do. 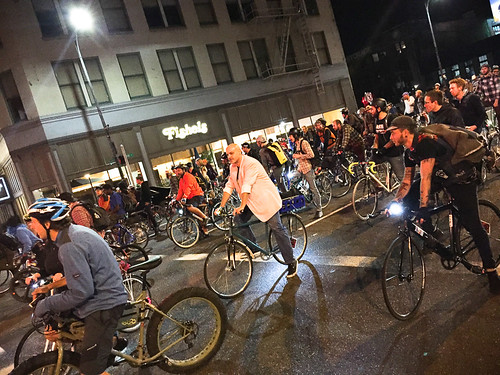 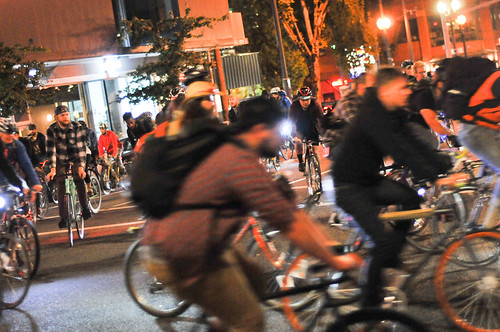 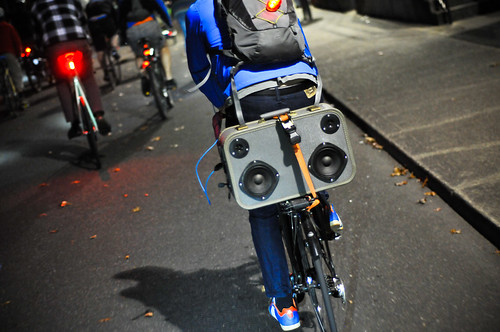 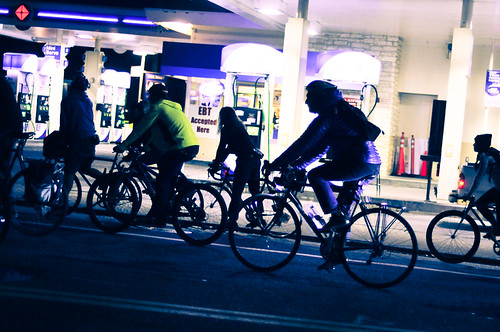 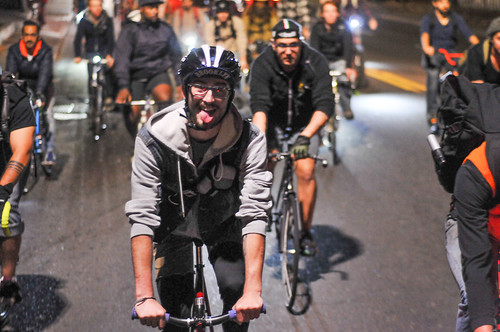 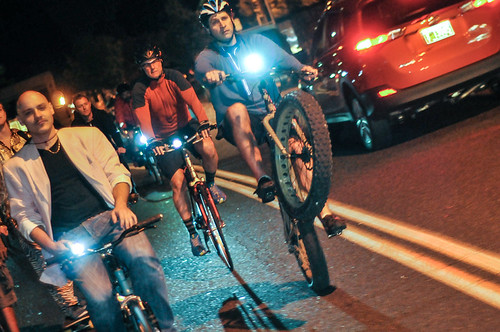 Rolling down Hawthorne with style. 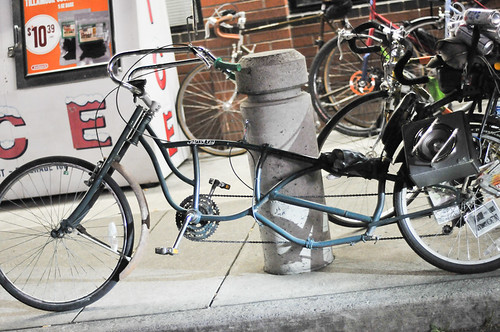 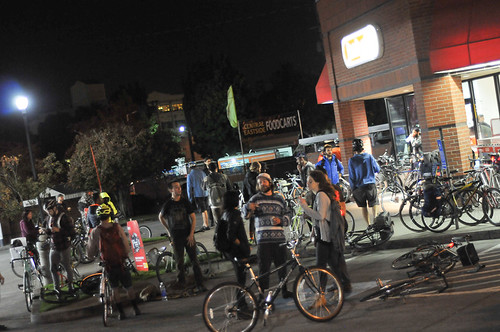 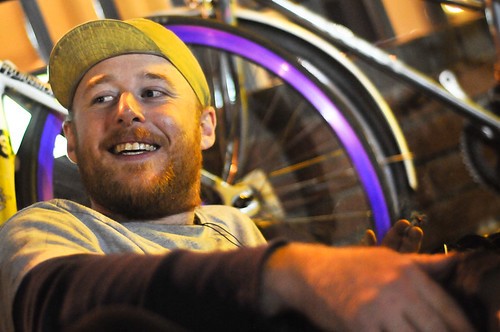 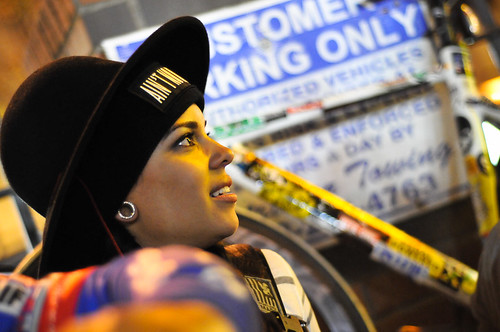 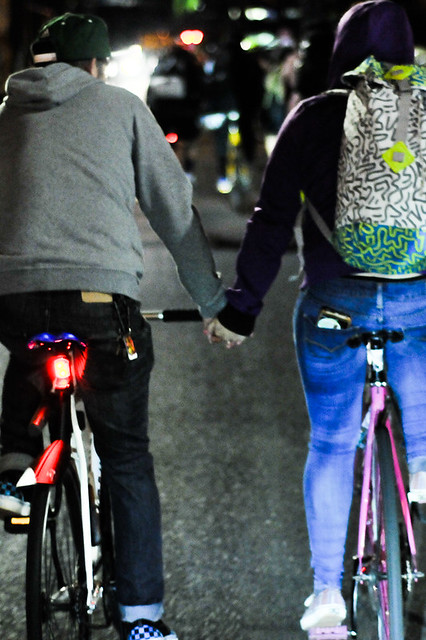 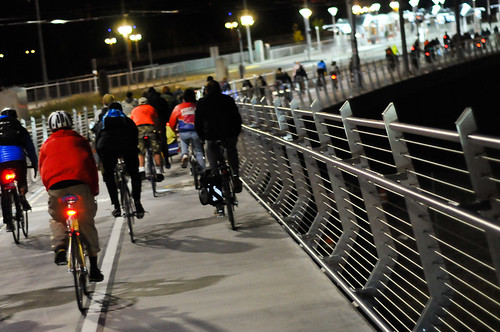 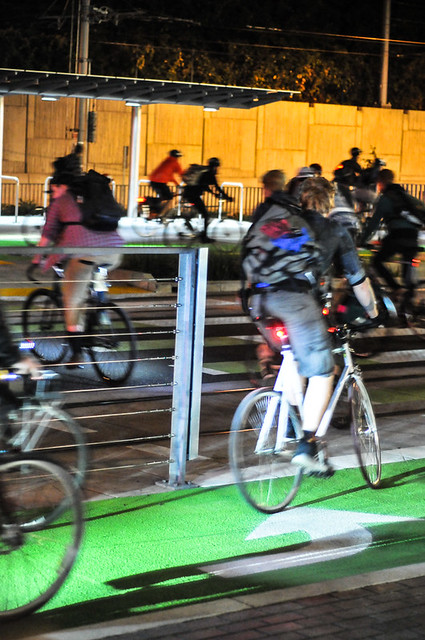 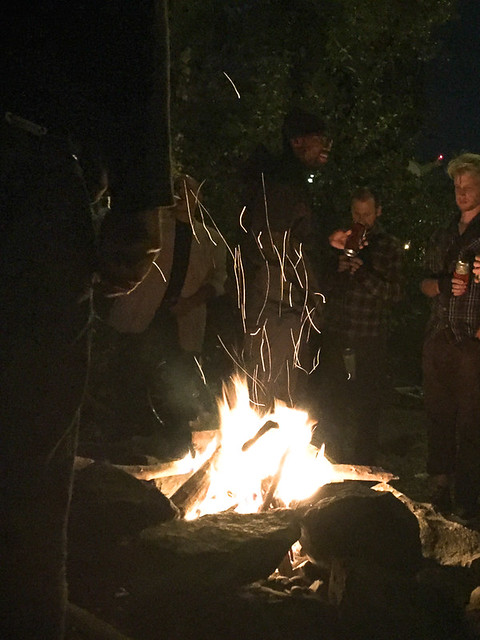 Always a nice way to end a bike ride.

Next week’s ride will have a Halloween theme. Check out the Facebook event page for more info.

The post Rolling with the Thursday Night Ride appeared first on BikePortland.org.