It has happened. And I hate to say that I’m not surprised.

On Sunday October 11th, Carole Barkley was hit by a man riding a bike near the Tilikum Bridge. The woman was walking her dog (the dog was not injured) near the west end of the new bridge when the collision occurred.

We received the email below last week from David Loftus, Carol’s husband (emphases mine):

“My wife was hit, hard, by a cyclist near the west end of Tilikum Crossing bridge on Sunday morning about 9 a.m. The collision knocked her down and put her in the hospital for more than two days with four broken ribs, a separated shoulder, a chipped vertebra, lots of cuts and abrasions, and attacks of vertigo.

She was walking our six-pound dog (who was fortunately unhurt), and specifically waited for the pedestrian crossing signal at the east end of the Orange Line MAX platform. Presumably the cyclist had a red light, but my suspicion is that he wasn’t looking for a signal under the presumption that he’d passed the big intersection at Moody and Meade and was free to climb the bridge heading east.

I don’t wish to demonize him; he stayed at the scene, gave us his name and contact info, and seemed very upset and apologetic. What puzzles me is that Portland Police did not respond to the 911 call, and they would not take a police report when I called a few days later. (As a side note, two of the Police Bureau employees I worked my way through on the phone had no idea what Tilikum Crossing was.)

There are plenty of other issues with regard to the signaling at both ends of the bridge (I work part-time for the Portland Streetcar and have observed other red flags with regard to cross traffic and signaling), but I was wondering whether you’d be interested in using my wife’s story as a jumping-off place to discuss them.

Here’s a closer look at the exact intersection where this happened. It’s east of Moody at the future location of SW Bond: 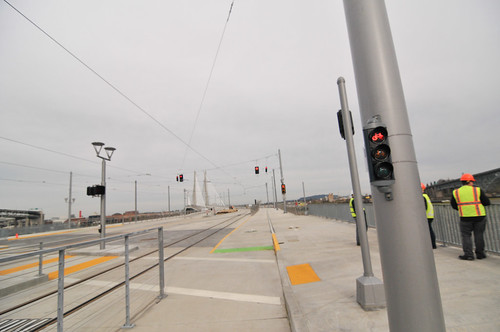 As I said above, this story doesn’t surprise me. I’ve had concerns about the routing, signals, and path design on the west end of the bridge for weeks now. Compared to the transit lines, the bikeways often seem like they were mere afterthoughts. We have also received several emails and comments (especially in response to our open thread the day the bridge opened) from readers who share these concerns. Our News Editor Michael Andersen and I plan to cover the issues in more detail soon.

As David says in his email, perhaps this collision could help highlight the issues and start another discussion about how best to address them going forward.

Now that the bridge has been open for a few weeks and some of you have ridden it many times already, do you have any concerns about the west end near SW Moody and the MAX platform?

UPDATE: We’ve just received the photos below of the location where the collision occurred from David Loftus: Comments about the photos from David:

The first photo is from the cyclist’s perspective approaching the accident site. The tiny signal on the big silver light pole is the only bicycle signal at that intersection, with no prior warning that there is a pedestrian crossing coming up, and that pole as well as the power boxes in front of it neatly hide a waiting pedestrian as well as the normal-sized bicycle signal that’s 40 or 50 feet BEYOND the intersection. (So what is it for?)

The second photo, much closer to the pedestrian crossing, shows how near you have to get before the larger, main signal comes out from behind the items that obscure it. And, being so far beyond the intersection, where is a cyclist supposed to know where to stop?

UPDATE, 4:30 pm: TriMet has released video of the collision.