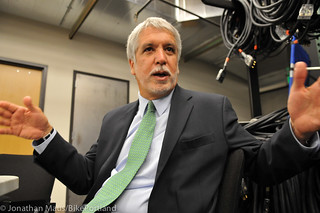 Once and future Bogotá Mayor Enrique Peñalosa
in a 2012 interview.
(Photo: J.Maus/BikePortland)

Colombian mayor: Celebrated urbanist Enrique Peñalosa, a major architect of that city’s bike boom, was re-elected to lead Bogotá Sunday after 12 years out of office. He again did much of his campaigning by bicycle.

Car-free Oslo: The capital of the largely petroleum-funded nation of Norway plans to ban cars from its city center in four years.

Rural speed control: On some country roads in Portugal, a speed camera detects whether you’re speeding and, if you are, gives you a red light in the middle of nowhere. Intriguingly, it works.

Racing fantasy: A dashboard camera that just hit it big on Kickstarter “can overlay performance data on top of its HD footage in the form of dashboard gauges, giving drivers videogame-caliber instant replays of any moment they choose.”

Distracted driving: The percentage of 16-24-year-old drivers observed visibly manipulating a hand-held device behind the wheel has tripled since 2010, to 4.5 percent; for people 25-69 it’s doubled to 2 percent.

Hater baiter: London’s cycling commissioner says it’s “inevitable” that “crap freelance journalists” will use anti-biking articles for “clickbait” but it’s not going to stop his work.

Shock jock: YouTube celebrity Shane Dawson wanted his 2.4 million Twitter followers to know that it is “literally so tempting to kill” people who “ride their bikes in the fucking street.”

Crosswalk bias: PSU scholar Tara Goddard’s research discovery that black people have to wait 32 percent longer at crosswalks than white people before someone yields to them has made international news.

Improvisational housing: A 23-year-old Google engineer lives in his 128-square-foot truck in the parking lot. He’s saving 90 percent of his salary.

Congressional activism: As former DC and Chicago transportation director Gabe Klein tells it, the buffered bike lanes down the middle of Pennsylvania Avenue were requested by one passionate commuter: Rep. Earl Blumenauer (D-Portland).

And finally, your video of the week makes an interesting case that the Dutch are right to treat traffic infractions by people biking the same way they treat marijuana use: illegal but unenforced.