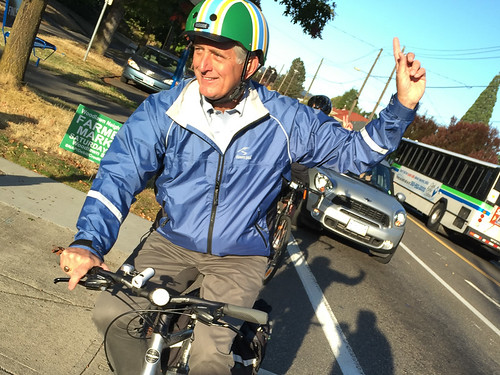 In a statement posted on his website, Hales said: “Confronted with a choice between giving my full effort to the job of being mayor and spending that energy on a long and consuming re-election campaign, it’s an easy choice.”

Instead of gearing up for what would have been a grueling campaign against a well-known challenger in Ted Wheeler, Hales says he’d rather focus on the issues facing Portland in his final year in office. The mayor mentioned that Portland’s housing and gang crises are weighing heavily on his mind.

Wheeler made waves almost instantly upon announcing his candidacy and he has shown he would take the election battle right to Hales. Earlier this month Wheeler racked up endorsements from Portland three past mayors.

In his announcement today, Hales said he hopes “several qualified candidates” will join the mayoral race. “There are some dynamic new leaders in our community, and I’m excited to see who steps up.”

We had been looking forward to a Wheeler-Hales matchup because both men seemed to be ratcheting up their focus on cycling and transportation issues.

What does Hales’ exit mean for cycling? That’s hard to say. He has been involved in a few projects of late — most notably a pledge to install traffic diverters on SE Clinton, the city’s embrace of Vision Zero, a new approach to bike share, and so on. But all those initiatives are fully supported by Transportation Commissioner Steve Novick and others on City Council. At first glance, it doesn’t appear that Hales has spearheaded any major bicycling initiative that might flounder without him at the helm.