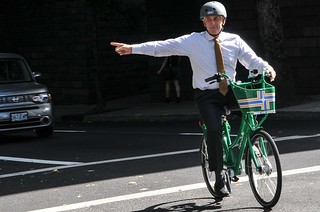 As Hales plans an exit, which way will the race turn?
(Photo: J.Maus/BikePortland)

Monday’s surprise announcement by Mayor Charlie Hales that he won’t run for reelection is rippling through the city’s transportation wonkosphere.

Portland’s unusual City Hall system means that the transportation commissioner (currently Commissioner Steve Novick) has much more power than the mayor on most streets issues. His transportation authority was delegated from the mayor, so the next mayor’s biggest decision may be who gets to oversee the roads.

But aside from that, Mayor Hales has been personally involved in a handful of subjects that matter a lot to bike transportation. Here’s how we see his departure from the race shaping things. 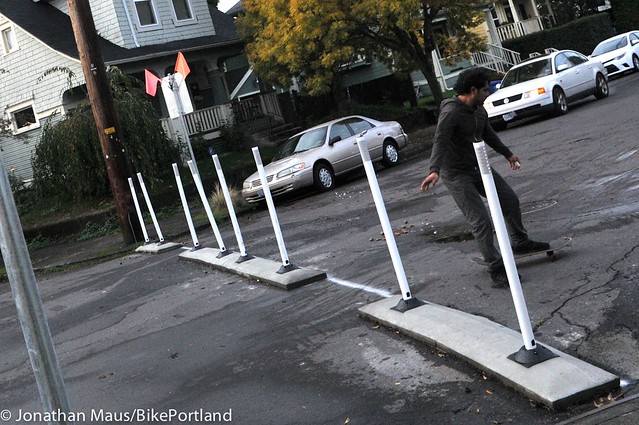 Experimental diverters like this one on N Rodney appealed to Hales. Will his successor want to fund them?

Without Hales: The next mayor has a chance to embrace an innovative program, but could easily let it die.

The most substantive bike-related commitment Hales has personally made in office was to announce, last spring, that he would start a program to use on-street experiments to install more diverters on the handful of neighborhood greenways that are overcrowded with auto traffic. That program is getting a head start on Clinton this year, but it can’t continue without funding of its own. Until Monday, the best bet was support from Hales during future budget processes.

Without Hales: Commissioner Novick becomes a lonelier champion for transportation revenue, but the next mayor will start with a clean slate of credibility.

Hales was understandably accused of copycatting Wheeler on this issue, but the fact that both of them endorsed it certainly legitimized the concept. It’s anybody’s guess whether voters will approve this plan next spring on the same ballot that will include a mayoral primary. If another candidate campaigns against it, what will their alternative plan be for transportation funding? Whatever it is, they won’t be hobbled by Hales’s public lurching last year from one plan to another.

Without Hales: The mayoral race might include a major debate about street safety.

Hales never really embraced one of the hottest issues right now in the national active transportation movement: the proposal (unanimously backed in Portland by city council) to eliminate all avoidable traffic deaths in Portland by accepting public responsibility for the situations that led to them. Hales took his time before using the phrase a few times in front of very specific audiences. Wheeler has said nothing about it yet. Because Vision Zero is likely to require the city police bureau as well as the transportation bureau, eliminating all avoidable traffic deaths in Portland will probably require enthusiastic support from Portland’s mayor, whoever that is. With Hales out, will any candidates warm to the idea? Or will it be too closely associated with the outgoing administration for them to make it their own? 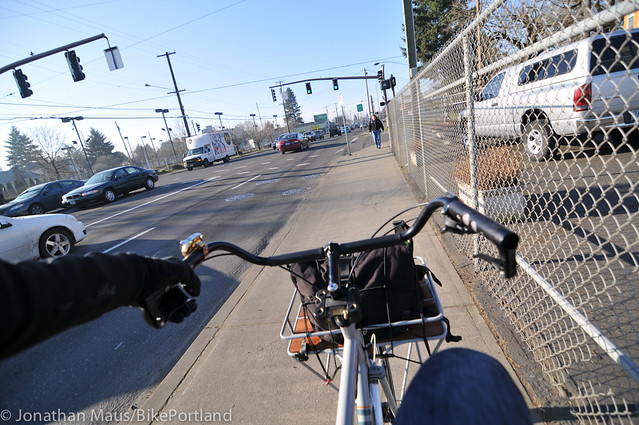 The project will restripe Foster to replace passing lanes with a center turn lane and bike lanes, reducing traffic weaving and making crosswalks much safer.

Without Hales: The next mayor will learn to either love or hate safety projects.

This major road safety project on a chronically high-crash street was enthusiastically backed by nearby neighborhood associations and unanimously approved by City Council, but it’s expected to cause several mintues of traffic delay and/or traffic spillover onto other streets in 2016 or 2017. Some political backlash is all but certain, and biking advocates will face a major challenge to avoid this being painted as a bikes-versus-cars and rich-versus-poor issue. (That’ll be a false narrative, because the new bike lanes won’t be that great and the safety benefits will go mostly to people driving and walking, but explaining this in the local media will be difficult.) Whether or not the next mayor becomes personally associated with Foster, this fight will shape his or her perceptions of both bike projects and general road safety projects for years to come.

Without Hales: There might be nobody forcing businesses to work together for change.

Hales has been uncharacteristically hard-nosed in pushing businesses in the neighborhood just north of Portland’s downtown to rethink their streets and storefronts. The new 3rd Avenue bike lane and the small plaza planned for Ankeny and 3rd are the first signs of that, but there’s much more potential: with parking removal and daytime storefront hours, this neighborhood could be Portland’s answer to Times Square. Without Hales and his chief of staff Josh Alpert on this, the neighborhood’s momentum toward change could lose steam.

Without Hales: One of the city’s most pro-density politicians steps down.

If biking advocates could count on Hales (a former homebuilders’ lobbyist) for anything, it was standing up for the sort of infill and density that created Portland’s bike-friendly streetcar suburbs in the 1900s, 10s and 20s. His proposed tax on demolitions specifically exempted homes on multifamily zones. He personally kicked off the infill housing project that might result in legalizing more duplexes and townhomes but might also result in more efforts to freeze lawn-and-driveway neighborhoods in increasingly expensive amber. Public resistance to infill has created a major political opportunity for any candidate who wants to start publicly lambasting it. Hales’ departure increases the chance that someone will try.

There’s also the possibility that Hales’ new trajectory will allow him to push ahead on the issues that might not have been politically palatable but that are close to his heart. He told KOIN earlier today that, “This gives me a lot of freedom to focus on the work and not have people wonder, ‘Is he doing this because he wants to be elected?’” That’s a question we’ve heard from many readers as he’s sidled up closer to cycling in the past few months.

Of course, there’s another possibility, too: that Hales’s exit from the race will make room for someone who’s not only inclined to think about transportation and development issues from a low-car perspective (as Wheeler is) but also someone with a deep understanding and enthusiasm for these issues (which Wheeler seems to lack, at least so far). In his announcement, Hales said he was “excited to see who steps up.”

Though we certainly haven’t agreed with Hales on everything, we’ll agree with him on that.

The post Six bike-related issues that might take a turn with Hales out of the race appeared first on BikePortland.org.