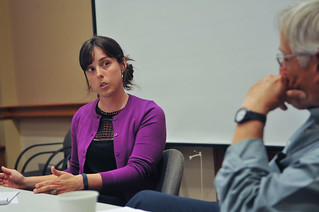 Four months after it officially launched, Portland’s Off-road Cycling Master Plan is getting started in earnest. Yesterday the city released a more detailed project scope and opened the application period for the project’s advisory committee. Back on October 12th, the city chose a project consultant (Toole Design Group) that will be tasked with managing the public engagement and planning.

Michelle Kunec-North, the bureau of planning project manager overseeing the plan, spent all summer talking to interest groups and organizations. Her goal with that initial outreach was to better understand the lay-of-the-land, both figuratively and literally.

“Now the idea is to zoom out with a wide lens and set up a system plan for where these facilities might be, what they might look like and who they might serve,” Kunec-North told members of the Bureau of Transportation’s bicycle advisory committee back in September.

To help answer those questions the city is looking for 15 people who want to serve as representatives of the community and sit on the Project Advisory Committee. Here’s who they’re looking for:

Anyone interested in this committee needs to have an application in by November 18th.

From what we’ve heard so far from Kunec-North, this plan will look at all types of facilities — not just singletrack. And it’ll also tackle what she has repeatedly said are the two biggest issues they’ve heard from the community: off-road cycling’s potential impacts on the environment and interactions with other users of parks and natural areas.

If all goes well, a draft Master Plan should be in front of City Council about a year from now. Stay tuned for announcements of the first public meeting and open house.