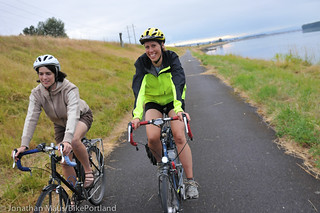 Last week, the spring 2016 race for Portland mayor looked like a hard-fought duel between two very similar people. On Monday, when Mayor Charlie Hales dropped out, it briefly raised the possibility of a coronation for the remaining major candidate, State Treasurer Ted Wheeler.

Amid all this, we wondered what the city’s bike advocates have been thinking. So we asked a bunch of them.

Lisa Marie White of the Portland political action committee Bike Walk Vote, which was active during the previous mayoral cycle:

I’ve had a lot of thoughts about the mayoral race, but ultimately I’m realizing that we need to get a questionnaire and interview from Wheeler (and ideally get some other people to run. I have a couple in mind who I’ve reached out to… will keep you posted if any are starting to sway). None of the current rumored challengers are particularly pro-bike nor interested in making this a part of their platform/sell to voters, which sucks.

BWV is currently dormant, but now that Hales is out, I think it might be important to revive it for endorsements. If we don’t have a voice in the race, especially the way it’s currently shaping up, I fear active transportation will remain a side issue. Wheeler is not an advocate, though he’s not an enemy. He needs a push.

“Someone who knows bullshit when they see it.”
— former BTA advocacy manager Michelle Poyourow on the ideal mayoral candidate for bike advocates

I don’t have any particularly bikey or transportation-progressive people in mind whom I think should run. All kinds of people come to the conclusion that bikes are a good investment, and our transportation system needs radical reform, whom I wouldn’t identify as being part of that “culture.” They just do the math, or trust good advisors who themselves do the math. I’m thinking of Bloomberg, Novick, others like them.

I will have to think about who in the city is smart and ballsy and experienced enough to be a good mayor. It might not be someone who currently gets the “bike” vote. But it is someone who knows bullshit when they see it.

We know that big changes to make big streets safe will require dedicated, passionate leadership to build broad support. Let me clear, when I say big streets safe, I am calling for a comprehensive network of protected bike lanes on arterial streets. The next mayor of Portland should emphasize safety over speed and continue to grow the best network possible to ensure that all of our neighborhoods are twenty-minute neighborhoods. It will require competencies in coalition building and experience partnering with various partners, especially community based organizations that are on the front-line of important issues such as affordable housing, building real economic opportunities for Portland residents and rebuilding trust.

BTA is launching a “Bike the Vote” effort. Advocates can get involved by helping write our candidate questionnaire, turn out to forums and debates. We will provide easy toolkits. … The best way to get involved with Bike the Vote is to contact Carl Larson at carl@btaoregon.org. He’ll be leading up the citizen action part of that work. We are meeting later this afternoon to put a timeline and rough outline together. Amy Subach of Vision Zero USA,
with her husband and children.
(Photo: Megan Gray via Subach)

The first season of the mayoral race taught us that “back to basics” is no longer a winning position. Portland needs leaders with a strong vision for Portland’s future, leaders who love our city and relish the challenge of guiding our impending population growth instead of letting the market do its thing. Who is going to guide the city?

We loved seeing Wheeler and Hales compete to be more street-safety oriented and bike friendly. We talked with Wheeler about the R[eturn] O[n] I[nvestment] of pedestrian comfort, and he seems to get it. We hope that Whoever runs against keeps him on his toes about active transportion (ha ha pun alert), and we think that the commissioner races become a good venue for our city to continue this conversation.

There’s the bigger issue of the (dis)functionality of the structure our city government, and the confusing interplay between the city, county, and Metro.

The local advocates are doing a great job, and we think they can and should ask for more from mayoral candidates than bike rides. We need someone with a vision for the edges of the city as well as the center, which includes not only better safety/infrastructure but also better transit and walkable “20 minute neighborhoods.” Improving the edges would reduce the pressure of displacement.

I guess I’d like to see someone run for mayor that doesn’t look like the current city council line up- someone youngish, with a lot of energy, maybe a person of color, who’s not from inner/SW Portland. And who mainly bikes or takes transit! I think advocates now are looking at the big picture- a lot of envisioning the future, especially with the Comp Plan being updated, and with housing and affordability being such important issues to address. I feel like collaboration is the future of advocacy and of Portland- groups that don’t seem to have much in common banding together to present a united front on issues to their local legislators, lawmakers and regional powers. 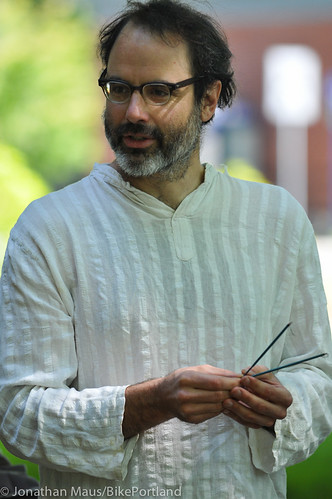 My question is “what are you doing to ‘think big’ for bicycling and other green transportation?”

As a frequent visitor to Portland in the 1990s and early 2000s, I was always impressed to see big urban livability projects moving forward. Lots of what was built in that era was unique in the US, and has had long-lasting benefits. Steel Bridge lower path and Eastbank Esplanade. Mixed streetcar and plaza space at PSU’s Urban Center. Mixed sidewalk, street and parking on NW 13th. And infrastructure from before the 1990s also, like the Skidmore Fountain Plaza with mixed light rail and pedestrians.

Since I moved here in 2008, the big vision projects appear to have ground to a halt. The Tilikum Bridge is the only really big piece that’s gone in, and the execution of the facility is so lacking that it doesn’t jump out to users as an example of a world-changing innovation.

Last month I visited Europe for the first time, I spent a month traveling by bicycle and train, and saw for myself what low-car cities and towns look like. They look a lot like PSU’s Urban Center, like Skidmore Fountain, or like NW 13th. They don’t look like SW Oak/Stark, they don’t look like the Rose Quarter Transit Center, they don’t look like N Williams. All of these are good, important steps in the right direction, but the deliverables are sorely lacking when compared to either European cities or what Portland planners and leaders did in the 1990s.

The past successes were the result of leadership at the mayoral level, and Portland is poised to implement more Big Vision projects. The constituency is ready, but leadership has lacked the political will needed to make them happen.

So, my question for anyone interested in being mayor of Portland is “What big plans do you or your supporters have? What are you going to do to transition Portland into a truly multimodal, low-car city? How will you wrangle support from constituents to do it? Fund it?”

With Director Leah Treat’s leadership on Vision Zero within the Portland Bureau of Transportation, having a mayor that was a true Vision Zero champion would create a real dream team that could really transform Portland streets into safe, inviting places to walk and bike. Portland also has a real opportunity to incorporate equity into our vision for safety in way that other cities have yet to do. Vision Zero fatalities, Zero serious injuries, Zero disparities in infrastructure investments in our lower income neighborhoods. That’s the kind of leadership I want to see from Portland’s next mayor. 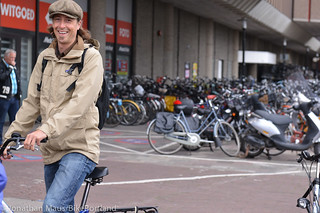 We need a candidate for Mayor who is willing stand in support of historically disenfranchised Portlanders and ensure that City Government works for them. On housing, taxation, and transportation we have systemic challenges facing people of color and low-income communities. Overcoming disparities in access to affordable housing, transportation choices, and economic opportunities will take real leadership. We need a Mayor who is willing to stand up to Oregon’s pay-to-play politics and lead on behalf of our truly progressive electorate. As advocates we should be focused on elevating voices of women and people of color, ideally as mayoral candidates.

I think somebody needs to start educating Ted about active transportation issues, along the lines of what was discussed at the PSU panel last week.

I’m not sure it makes sense to try to recruit a bikey candidate to get into the race, although a well-rounded candidate who’s good on bike issues would probably be a nice addition.

I kind of hope someone runs on an equity platform. There are some important discussions that should be part of this race.

And finally, just for fun we’ll quote in full an unsolicited email we received on Monday from someone who once considered running for mayor himself: former Metro President David Bragdon. Here’s what he said about the current Portland mayoral situation under the subject line “Freedom”:

Now Charlie can lead the crusade to oust ODOT from the urban region, without too much fear of their legendary retribution!

Certainly Bragdon thinks that needs to happen. Wherever things go from here, we’ll be watching to see what happens next.