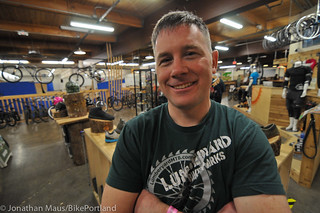 It’s way too early for us to start talking about Christmas, but we’ll make an exception for this story.

Today in east Portland the non-profit Community Cycling Center will pick up $10,000 worth of new bikes from The Lumberyard. The CCC’s Melinda Musser says the donation will include 32 “high quality” BMX bikes.

Musser says the “unprecedented” donation will help kick-start the organization’s annual Holiday Bike Drive and provide a new fleet of bikes to use in their kids programs next year. The CCC runs summer camps and bike safety programs in neighborhoods where some families can’t afford to buy bikes. And in December the CCC will give away about 300 bikes at their 20th annual Holiday Bike Drive. The Lumberyard is a bike park that boasts 66,000 square feet of indoor and outdoor tracks, trails, and jumps. Since opening in 2012, The Lumberyard has planted itself firmly in the community. They have kids summer camps of their own and they even have a high school scholarship program.

This is the second bit of exciting news from the CCC this week. On Monday they unveiled a new website and video.

The post The Lumberyard is donating $10,000 in bikes to the Community Cycling Center appeared first on BikePortland.org.