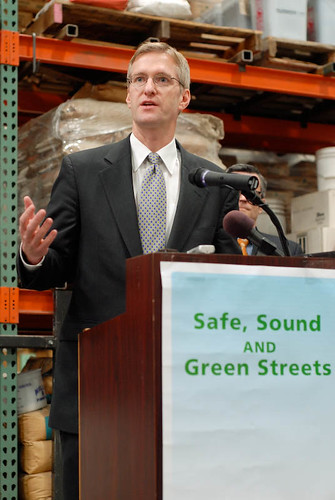 Portland’s current mayoral frontrunner says that if he wins next year, he’ll take over the transportation bureau and rewrite its budget from scratch.

In an interview with Oregonian columnist David Sarasohn, mayoral hopeful Ted Wheeler said the Portland Bureau of Transportation’s current budget is “byzantine” and that its street system is “a patient on the table bleeding to death.”

“As mayor, Wheeler would assign himself the transportation bureau (along with the mayorally expected police bureau), and start redesigning its budget from zero,” Sarasohn reported in a column published Friday afternoon.

Portland’s mayor doesn’t have many actual powers beyond those of the other four commissioners on the city council. The main difference is that it’s up to the mayor to decide which commissioner gets administrative authority over each of the city’s 19 bureaus and offices.

In 2013, Hales assigned the relatively high-profile transportation bureau to his fellow incoming Commissioner Steve Novick, and the pair have voted in near unison on transportation issues since. At least for people outside City Hall looking in, the two usually seemed to speak with one voice during their bruising, zigzagging attempt last year to create a new local fee or tax for transportation.

That campaign frequently put Novick and Hales at odds with the Portland Business Alliance, the regional chamber of commerce. The PBA argued for much less money to be spent on improving walking and biking so that more could go toward pavement maintenance, and opposed paying for any of it with a progressive income tax.

Though Novick hasn’t personally pedaled since childhood and doesn’t seem passionate about improving biking, he’s made some important decisions in its favor. Most importantly, perhaps, he hired Leah Treat, a proudly bike-friendly top aide to D.C.-Chicago change agent Gabe Klein, to run PBOT. There, he’s given her the reins to lead Portland to a formal Vision Zero policy, to finally launch a bike share system, to create and test a new set of neighborhood greenway standards and, recently, to make physical protection the city’s default option for new bike lane projects. 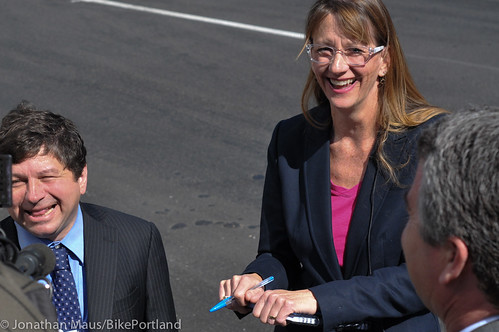 In addition to his unfinished search for a new transportation tax or fee, Novick has fought and won $8 million in city general funds to improve sidewalks and crossings near 122nd Avenue, part of an agreement with TriMet that’ll create East Portland’s first north-south frequent service bus line. Last summer, he gingerly embraced the Better Naito demo that may yet lead to better walking and biking on that street. On density issues, he’s been a reliable voice against NIMBYism dressed up as parking policy and for the only measure that’ll actually solve Portland commercial nodes’ auto parking shortages: paid overnight parking permit systems.

In short, Novick hasn’t been fantastic for biking so far, but he’s been pretty good.

If Wheeler is elected and takes over PBOT from Novick in 2017, it could be a useful fresh start. Wheeler’s not wrong about PBOT’s budget; I’ve been covering it for five years and couldn’t summarize it in a paragraph.

One thing that’s definitely true: PBOT currently sets aside almost zero money for new biking and walking infrastructure. On that front, things could hardly get worse.

On the other hand, PBOT has been run by solidly bike-friendly commissioners for almost all of 30 years: Earl Blumenauer, Hales, Vera Katz, Sam Adams and now Novick. If Wheeler means what he says about rebuilding the bureau from “zero,” it’s currently anybody’s guess what he’d put in its place.

Portlanders who see our city’s potential to escape the trap of auto dependence can take comfort in the fact that, as local biking advocate Michelle Poyourow put it last week, any politician can “do the math” and, as Novick has, “come to the conclusion that bikes are a good investment.”

But politicians have to pick battles, and it’s just as easy to imagine Wheeler deciding that making streets better (rather than merely making them smoother) isn’t worth fighting for.

When he jumped in the race, Wheeler and his team deserved some time to get up to speed on local transportation. Now that he’s decided he wants to run PBOT, it’s presumably time to start expecting him to spell out what he wants to do with it.