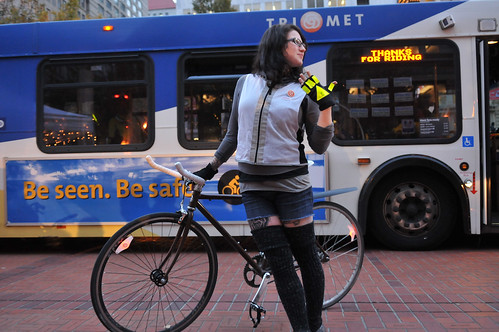 Showing off a pair of high-viz gloves at a TriMet safety event in 2010.
(Photo © J. Maus/BikePortland)

In what has become something of an annual event to encourage walkers and bikers to be more visible, TriMet is hosting a “Be Seen Be Safe” event tomorrow (11/11).

The event will take place in Pioneer Courthouse Square. Festivities get underway around 4:00. There will be giveaways of high-viz items like lights, reflectors, neon umbrellas, lights, and more. Also expect free basic bike repair and light installation thanks to A Better Cycle.

At 6:00 pm there will be a ride hosted by the Bicycle Transportation Alliance where everyone will light themselves up and roll across the Tilikum Crossing bridge to Base Camp Brewing (930 SE Oak Street) where prizes will be given out for best dressed and brightest bike. (Ride will end up at the Community Cycling Center’s big Bicycle Ball fundraiser party at Holocene.)

TriMet’s “Be Seen Be Safe” campaign started in 2010 and is always promoted most heavily at the beginning of November when it first begins to get dark for the evening commute.

Encouraging folks to wear to hear bright clothing and talking about people’s responsibility to be visible is a touchy subject. That being said, we’re glad to see that TriMet seems to have hired a fashion advisor.

They used to publish photos like this as part of promotional efforts around this campaign: Thankfully TriMet seems to have toned down their approach significantly. The image below is from their Be Seen website: Be Seen Be Safe – Hosted by TriMet and the BTA
Wednesday, November 11th
4:00 pm at Pioneer Courthouse Square
6:00 pm ride leaves for Base Camp Brewing

CORRECTION: This post originally made it appear that the BTA was co-hosting the event with TriMet. That was a mistake. The BTA is only leading the ride.

The post TriMet will hand out free lights and safety gear at ‘Be Seen Be Safe’ event appeared first on BikePortland.org.