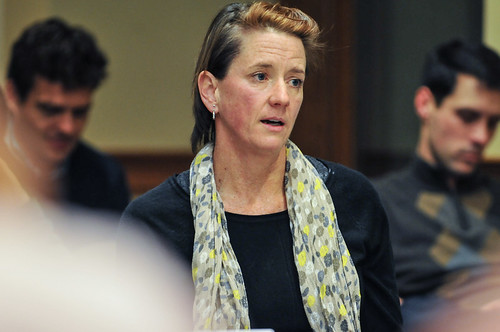 Many people move to Portland because it’s a place they can live with their family without having to use a car for every trip. For Leah Treat, that fact not only drew her here, it’s also part of her job description.

“I was told we would never get that past city council and was told we’d never get [Commissioners] Fritz or Saltzman on board. Guess what? We did.”
— Leah Treat, referring to the Portland bike share contract

Treat, 44, was the sole agenda item on last night’s monthly meeting of the City of Portland Bicycle Advisory Committee. She came to recap her first two years as leader of the Bureau of Transportation and get feedback from committee members.

Treat shared a bit of personal background, gave her impression of the PBOT she took over, outlined what she feels are her greatest accomplishments of the past 28 months, then asked the knowledgable minds around the table what big thing she should tackle next.

Treat’s journey in Portland started in the summer of 2013. After what she called “the most grueling and difficult interview process in my life,” Treat said she never thought she’d get the job. But now that she’s here Treat loves being in such a “wonky transportation town.” “Everyone is either a traffic engineer or a land-use planner, and I love it.”

Before Treat got here, PBOT wasn’t exactly a model of stability. Its last director was appointed by former Mayor Sam Adams — the man who current Mayor Charlie Hales promised Portlanders he’d be nothing like. Miller lasted just one year as director before Hales asked him to resign, telling The Oregonian that the bureau needed, “a fresh and fully qualified leader.” Hales hired Treat six months later.

At the BAC meeting last night, Treat said the transportation bureau was, “sort of rocked a little bit by the former administration.” She didn’t elaborate, but then added, “I think we’ve come away from some really difficult times.” It’s probably safe to say Treat was referring to PBOT’s double-whammy of controversial leadership followed by a period of stagnation in the area the bureau is perhaps best known for: cycling.

It must have been frustrating for Treat to be named leader of “America’s best cycling city,” and then be plunged right into pitching the “street fee” funding measure. That effort was so politically fraught that Treat (a “bike believer”), PBOT Commissioner Steve Novick, and Hales didn’t even talk about cycling for fear it would derail negotiations and give the fee’s detractors a convenient plank to stand on (a strategy Hales now admits was a miscalculation).

Last night Treat alluded to the street fee only tangentially and said, while Hales and PBOT Commissioner Steve Novick where taking the brunt of the battle, she spent that first year, “trying to build up organizational capacity.” She highlighted her completion of Portland Progress, a two-year work plan that outlines tangible short-term steps PBOT can take.

“I didn’t move to Portland to have to put my kids in the car all the time.”

With necessary politics and process behind her, Treat talks like she’s finally ready to break out of the pack. “Having built up the organization and gotten lot of foundational work done, we’ve now been able to start doing more outward facing work and start doing some amazing things.”

According to Treat, that list of amazing things includes: becoming a “Vision Zero city”; securing a bike share contract; adopting a neighborhood greenway report; improving relationships with the Oregon Department of Transportation; and requiring developers of new projects to pay for protected bike lanes.

Treat even showed a bit of swagger when she mentioned the bike share contract last night. “I was told we would never get that past city council and was told we’d never get [Commissioner Amanda] Fritz or [Commissioner Dan] Saltzman on board,” she said. “Well guess what? We did.”

Treat called the passage of the neighborhood greenway report “a huge step for us” because it allows PBOT to “protect” greenways against high auto volumes and speeds. She called the city’s relationship with ODOT “not perfect, but improved” citing the traditionally conservative agency’s endorsement of the NACTO Urban Bikeway Design Guide. “That endorsement helps strengthen our conversations with engineers in Region 1,” Treat said. 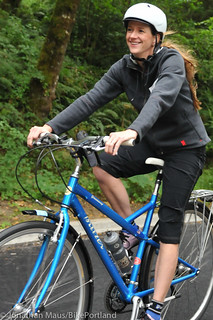 Treat riding in the Columbia
River Gorge in August 2013.

Then Treat shared details on what could be her boldest move yet: A new design standard that would require developers to pay for physically protected bike lanes on the street adjacent to their new projects (similar to existing policy that requires developers to pay for new sidewalks). Treat said she’s written an internal memo on the policy and she touted it in a presentation at a recent national bike planning conference in Austin.

Protected bike lanes are Treat’s “ideal” street treatment in part because she feels they’re the only way to provide the level of safey that will get more women and kids on bikes.

Treat called her new approach to protected bike lanes an effort to, “be a little more bold and try to build out the network.”

In explaining her stance on the new design standard, Treat acknowledged that it wouldn’t happen with every development. “But I’ve told our engineers,” she explained, “This is where we’re starting from, so you in the private sector have to back me down from there and you have to convince me otherwise.”

If Treat succeeds in making this stick, Portland would likely be the first city in the U.S. with such a strong policy for building protected bike lanes. That’s notable because right now Portland is falling way behind: According to an inventory by the Green Lane Project Portland has only 1.5 total miles of protected bike lanes.

To that point, Treat said, “I think it’s what this city needs in order to thrive and maintain its relevancy in the future.”

In the end, Treat’s push for protected bike lanes and her goals for PBOT in general come down to the same personal motivation that brought here to Portland in the first place: the safety of her four young children. With shifting school boundaries, Treat shared that they might get transferred to a school that’s “several high crash corridors away” (referring to PBOT’s safety program).

“I want them to live in a city where being outside and riding our bikes is easy to do. We couldn’t do that in Chicago. I didn’t move to Portland to have to put my kids in the car all the time.”

CORRECTION: The original version of this story stated that Treat was “given clear instructions” from Hales to not talk about cycling during the street fee effort. That wasn’t accurate. I’ve changed the story to reflect that not talking about cycling was a general strategy of the effort.

The post Leah Treat reflects on two years at the helm of PBOT appeared first on BikePortland.org.