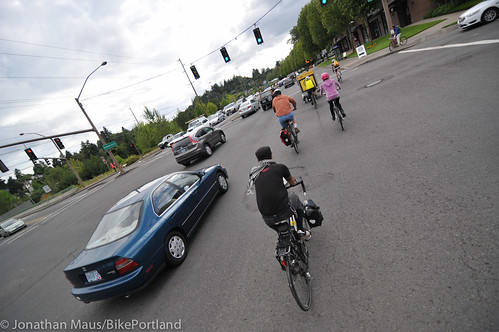 What’s going on out there?
(Photo © J. Maus/BikePortland)

Part of my job is to monitor various sources of information. As I do that, trends often start to emerge. Recently I’ve sensed an uptick in chatter about how “aggressive driving is getting worse in Portland.” I’ve also heard of a few specific incidents just in the last day or so.

I’m putting this on the Front Page to hear more from you and gain more understanding about whether or not aggressive driving is indeed on the rise or if these are isolated incidents that don’t point to a larger trend.

Yesterday a reader called the police after someone tried to “mow” her down while she rode on Sandy:

“Another day, another police call because some fucker tried to mow me down on Sandy then pulled over so he could scream at me that I was going to get killed and follow me down the street while I ran to hide inside a store.

The police guy came to find me inside the store, heard the story, said the car wasn’t there anymore and they would keep patrolling the area. (I had run about 2 blocks away)”

Then this morning, Adam Herstein claimed on Twitter that he was harrassed and yelled at while biking on SE Clinton:

I was just harassed on Clinton AGAIN. Driver swerved at me and got out of his car to call me “crazy” and to “get out of the way”. @PBOTinfo

When we posted our story about mayoral candidate Ted Wheeler’s plans to revamp the bureau of transportation, reader Brett Luelling wrote in to say he feels aggressive riving is “the biggest issue facing cyclists in Portland.” Luelling, who used to live in Salem and thinks people are much more courteous there, thinks we should approach the problem with outreach and education using the MADD model. “I raced for many years and have basically stopped riding road since moving to Portland and instead have been focusing on trail running,” Luelling says.

Personally I have not noticed any more aggression out there than usual; but it still bums me out to hear that other people are having these experiences.

What about you? Do you think these are just isolated anecdotes or do you feel like people are being more aggressive towards other road users? If so, what would you attribute it to?

The post Taking the pulse: Aggressive driving in Portland appeared first on BikePortland.org.