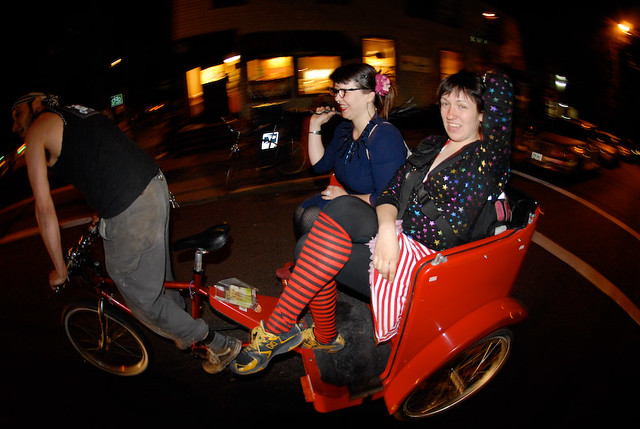 Three weeks ago, a task force convened by Transportation Commissioner Steve Novick released a new set of regulations for “for-hire vehicles” like taxis, Lyft and Uber.

Also included in the new rules: pedicabs — but the rules for those seem to have been written mostly with copy-paste buttons.

The result: According to code now under review at city council, car-free Portlanders would need not apply for pedicab jobs.

The new city policy would require anyone applying to operate a pedicab to hold a driver’s license and to demonstrate “at least one year’s worth of continuous driving experience in a United States jurisdiction immediately prior to the date of the application’s submission.”

The second requirement, also included in the proposed taxi code, is presumably intended to keep very recent immigrants out of driving jobs, but the requirement of “continuous driving experience” would have more serious implications for the pedicab industry.

The driver’s license requirement was first reported last week by the Mercury.

The policy also forbids pedicab operators from having a “felony conviction of any kind,” even as the city is considering forbidding most employers from asking about prior criminal records during the interview process.

Kyle Kautz of PDX Pedicab — he said he uses “Papa Bear” as his official job title — said the driver licensing rules as written would, if enforced, force him to drop half the people on his team.

“Half my guys don’t even have driver’s licenses — in fact, I don’t have a driver’s license,” said Kautz, whose company owns 11 pedicabs and contracts with 20 to 30 operators during peak season. “I have guys who have never driven a car before.”

Kautz does own two trucks to move his company’s cabs to out-of-town events like University of Oregon football games, but he said has sometimes hired someone simply to drive the truck down because so few of his colleagues drive.

Kautz and another local pedicab company owner, Ryan Hashagen of Portland Pedicabs and Icicle Tricycles, said they found out about the new rules days before the council passed them after months of deliberation with representatives of Uber, Lyft, and local taxi companies.

“The pedicab companies and operators were told repeatedly that there’s no bother in showing up to this set of meetings right now, we’re all going to be included in a second public process down the road,” Hashagen said. 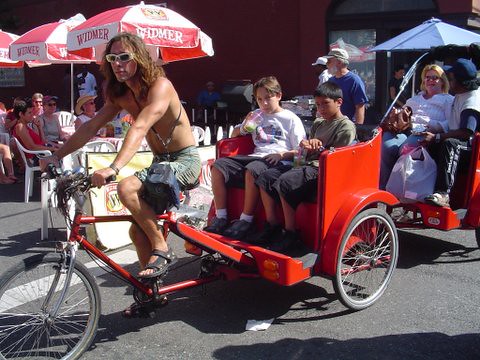 At the Mississippi Street Fair, 2005.

That may yet happen. But if it will, Hashagen and Kautz haven’t been told when.

Hashagen and Kautz both compared the proposed regulations to a set of rules proposed in 2009, but later dialed back, that would have required pedicab operators to have driver’s licenses and personal insurance policies, and also to carry fire extinguishers in their vehicles.

That process led ultimately to a city plan to draw up a separate section of proposed code for nonmotorized vehicles like pedicabs and horse carriages. The draft was approved unanimously by the city’s taxi advisory committee. But just before the city was preparing to take up those changes at the council level, Hashagen said, Uber arrived in Portland illegally and progress on the nonmotorized vehicle code project stopped.

Kautz said that he doubts his business or his operators are in immediate risk of being shut down.

“I really don’t think they’re going to enforce it,” he said. “They barely enforce half the laws.”

But he said that if these rules are in place during next year’s festival season, they’d disrupt a service that he said has “become a part of Portland.”

“If that happens, my guys are going to be like, ‘Nah, not working for you any more,’” Kautz said. “They’re not going to take the time to take that test. And there’s too many people in this city that don’t have driver’s licenses.”

The day after the first reading of the ordinance on Nov. 5, Portland’s recently hired Private for-Hire Program Manager Mark Williams said in an email to BikePortland that “we don’t have anything etched in stone yet, but we do plan on amending certain sections that are relevant.”

On Wednesday, PBOT spokesman John Brady said in an email that the council “will take it back up on November 24th. The second reading and vote is for December 2nd. That is the date that the regulations would become final.”

Correction: An earlier version of this post said the regulations had already passed their second reading.